The overwhelming enthusiasm towards the new president and his “pro-growth” ideas is being met with a dose of reality as investors are reminded how difficult it is to get anything accomplished in Washington.

Last week we saw how 26 members of the Freedom Caucus broke the market. On Friday their opposition to the Republicans’ plan to repeal and replace the Affordable Care Act led to the Republican leadership to pull the bill from being put to a vote. Now this is leading to a myriad of problems for Republicans (and thus investors).

It is the last point that is the major issue, with the first two only adding to the difficulty. The president had planned on using a budget accounting trick in his tax reform proposals. Essentially by removing about a $1 Trillion in Obamacare taxes, the baseline for revenue comparisons is reduced by the same amount. Now with the Obamacare taxes and all the spending still included in the baseline budget, any tax cuts will appear to slash revenues significantly and thus ballooning the deficit.

The question really will turn into how badly investors (and market speculators that have driven prices up since the election) will react to this new reality. During my Friday “What Really Matters” podcast, I mentioned a quote from Thinking Fast & Slow by Daniel Kahneman that is worth repeating.

We know the market had high expectations so this adjustment could get ugly. The more important issue is how YOU react. What are your expectations for the market? Are they reasonable? More importantly are you invested in a portfolio that allows for a wide range of scenarios and does not require being “right” with your predictions?

As the quarter draws to a close we continue to see a market struggling to figure out whether or not the “good” Trump campaign ideas will ever make it into law. My economic models are showing a strong pick-up, but most of the strength is in the ultra-leading indicators related to sentiment (see What am I missing?). The problem is whether or not this enthusiasm actually turns into real growth.  The disconnect between the “soft” & “hard” data is growing. The longer this goes on, the more impatient the market participants will become. 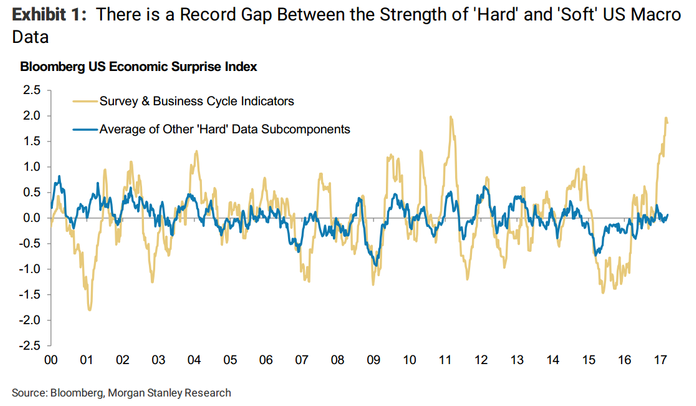 As I mentioned in my 1st Quarter 2017 Economic Update, we need to be careful to not let our own political leanings influence our analysis of the economy. Nobody knows exactly what type of economy we will see under President Trump because we’ve never seen a president like him. We should plan accordingly.

Stocks have stabilized a bit following the first major loss by the President last week. Something I will be watching in the weeks ahead will be whether or not the EXPECTATIONS for the economy have come down. So far we’ve seen the economic data not only strengthen, but also ABOVE expectations. 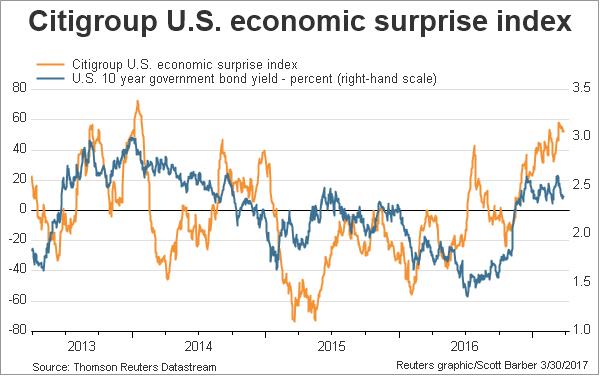 As most of you know, it’s not so much what the data says, but where it falls relative to expectations.

About Jeff Hybiak, CFA
New Kent, VA
Jeff joined SEM in October 1998. Outside of SEM, Jeff is part of the worship team at LifePointe Christian Church where he plays the keyboard and bass guitar. He also coaches a club soccer team.
Previous Post : 36 Years Later: A look at Reaganomics   Next Post : A Behavioral Approach to Investment Management