Last weekend was the “official” 10 year anniversary of the Great Financial Crisis. (This was when Lehman Brothers failed. Long-time SEM readers know the crisis actually began in 2007 with the failure of a few smaller mortgage brokers.) There has been a plethora of specials surrounding this anniversary. Most were victory laps including appearances by most of the major players that both helped create the crisis and failed to see it coming until it was far too late. Nearly every expert interviewed declared the world is better off now than it was leading into the financial crisis. Whenever I hear that I have to wonder if these people spent a long weekend in Colorado, Washington, or California with their good friend MJ.

This economic recovery has been the worst on record, with only a couple of quarters even surpassing the long-term average annual growth rate of 3.1%. While our economic models indicate the next few quarters may be stronger than the long-term average, the growth rate is not sustainable. Even worse, you would think households, corporations, banks, & governments would have learned their lessons about the dangers of too much debt. Instead, all find themselves with significantly more debt than before the financial crisis.

A recently released report from the McKinsey Global Institute highlights the changes in debt. They show all 4 categories worse off than they were before the financial crisis. A staggering $57 Trillion has been added during the economic expansion. To put that in perspective, TOTAL debt was $87 Trillion at the turn of the century. 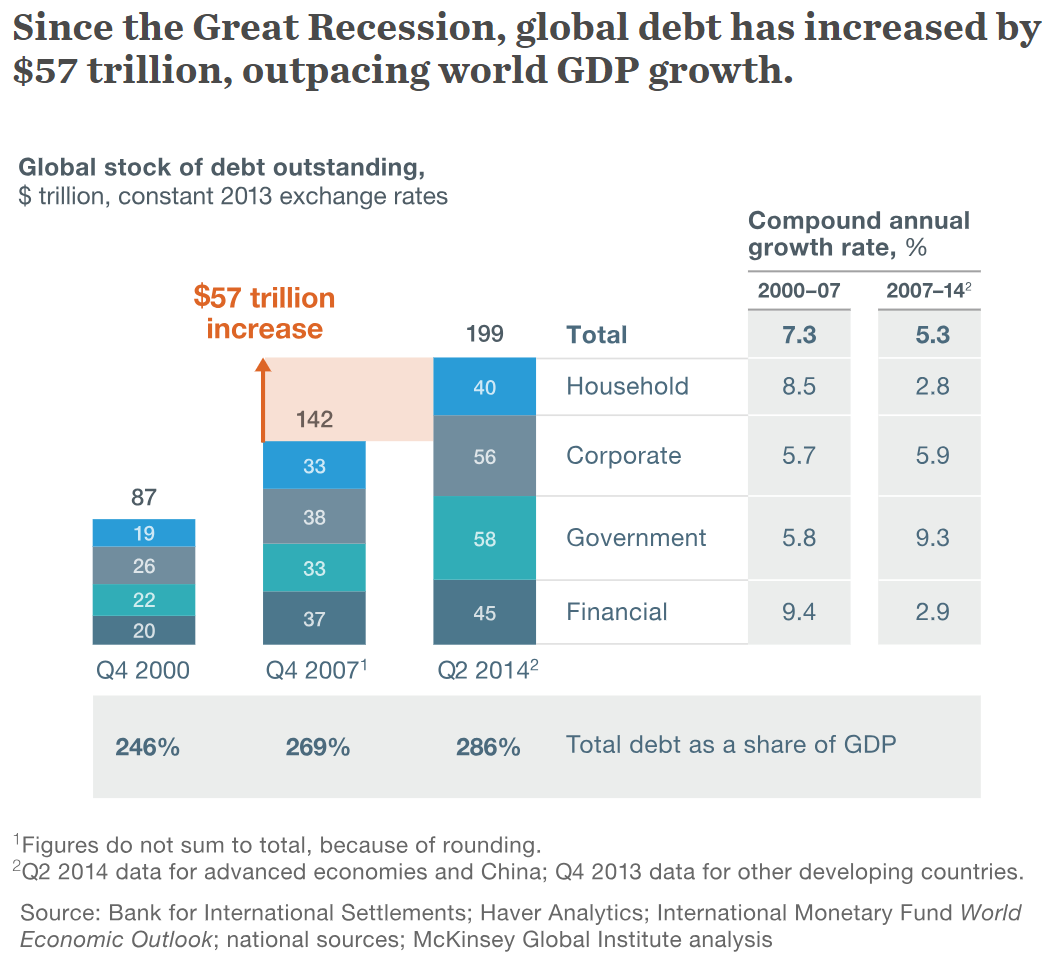 Debt by itself is not necessarily bad, but when the debt is not used to invest in things that create long-term growth it only serves to pull future spending into the present. There is little evidence any of the groups in the chart have used their debt to invest, but instead have spent money to prop up their short-term financial situation. The debt payments will only serve to slow future spending. With interest rates rising those debt payments will begin to absorb more and more of the future growth.

The complacency I’m seeing right now is frightening. The market is at all-time highs so everyone seems to believe we can’t have another crisis. I’m not sure why, but they all seem to forget that the market was at all-time highs as 2007 came to an end. The same was true in 1929 just before the Great Depression. Using the stock market as a gauge for the health of the underlying financial system is never a good idea.

I don’t know when people will wake up and realize we cannot continue down this path too much longer. When this overload of debt causes the global economy to implode you better have a plan. To learn more about SEM’s plan to combat this, drop me an email and we can have a quick chat.

About Jeff Hybiak, CFA
New Kent, VA
Jeff joined SEM in October 1998. Outside of SEM, Jeff is part of the worship team at LifePointe Christian Church where he plays the keyboard and bass guitar. He also coaches a club soccer team.
Previous Post : Target Date Risks   Next Post : Hurricanes & Our Investments - Ask the Expert Radio Show