For the most part investors have been focusing on all of Donald Trump’s “good” policies since his election. Things such as mass tax cuts, infrastructure spending, and cuts in regulation in theory would provide a strong boost to the economy. (I say “in theory” because actual evidence for any of those items is mixed and far more dependent than the overall perception of the polices, the point in the economic cycle, how they are positioned, and how they are paid for than the simple classroom economic models would imply. For a brief introduction to this concept, see Warning: Changes Ahead!) Investors have also seemed to celebrate policies that may create more US jobs (immigration crackdowns & a potential border tax for imported goods). Again, theoretically that may create more jobs, but it does not take into account the other side of the policy and how they might respond to the US policies.

We are now in week two of President Trump’s agenda and while the markets have yet to reprice anything just yet, the enthusiasm seems to be waning. He has already been dealt a blow by a judge on his immigration policies and world leaders and Congressional representatives alike are starting to voice their discomfort at his broad and swift actions. This is something we will need to watch closely in the days, weeks, and months ahead. I’ve said since the election the market was far too focused on “good” Trump and not pricing in the risk of the “bad” Trump.

Please do not take my assessment as a political statement. Long-term readers know I’ve discussed many of the things President Trump is tackling as the STRUCTURAL issues that caused the “Obama” recovery to be the worst on record. Just looking at Friday’s initial 4th Quarter GDP estimate it is easy to see our trade deficit being a major drag on economic growth (as shown by this great chart from Advisor Perspectives). 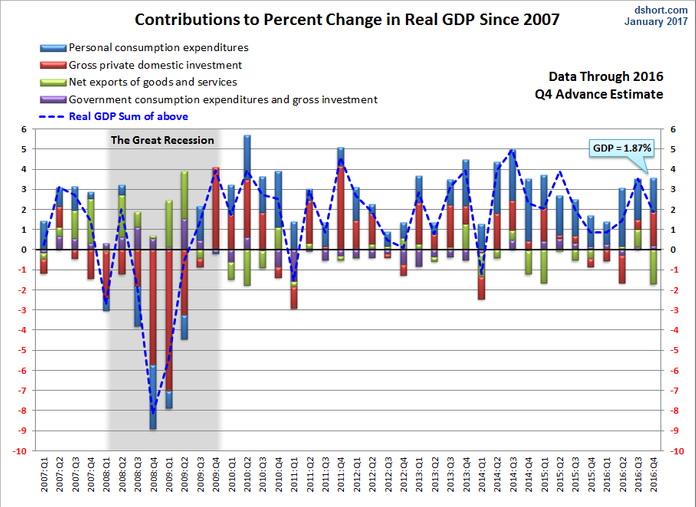 Last quarter we did see a surprise jump in Gross Private Domestic Investment, mostly related to a build-up in inventory. That could be part of the “Trump effect” as we saw both business and consumer confidence jump in the wake of the election. As businesses become more optimistic, they buy more inventory, which boosts GDP. If sales follow they will buy even more inventory down the road. Of course if a boost in sales does not come along, that inventory will have to be sold off at lower prices and future inventory purchases will slow.

If my study of behavioral finance has taught me anything it’s the economy could literally go either way given the emotions surrounding our new President. This means being highly cautious in jumping to conclusions on which way things might go the rest of the year.

Things are already heating up for the Trump administration. Probably my favorite series of news alerts hit my phone last night as we were attempting to relax.

About an hour later……

Please be careful with your investments and making any judgement or predictions as to how any of these policies will play out.

It’s Fed Decision Day today. I don’t think anybody expects the Fed to make a move on interest rates since there isn’t a press conference scheduled to follow the meeting. What everyone will be watching is whether or not the Fed says anything about the President or his policies in terms of the risks they might create to the Fed’s own forecasts.

We didn’t learn much from the Fed’s meeting & subsequent statement yesterday, but we did get another key piece of evidence of the potential “Trump effect” when the ISM Manufacturing Index was released. This is one of my favorite leading indicators as it is available immediately after the month is over, giving us a good look at what the economy was like in the most recent month (keep in mind most economic data is not available for 2-8 weeks after the month is over.) In addition inside the ISM Manufacturing Index are some leading indicators of manufacturing activity. While our country does not make as much as it used to, it is still a good reading on the sentiment inside the economy. It is easy to understand — if businesses are optimistic they will order things. Here’s what the ISM “leading indicators” look like right now. 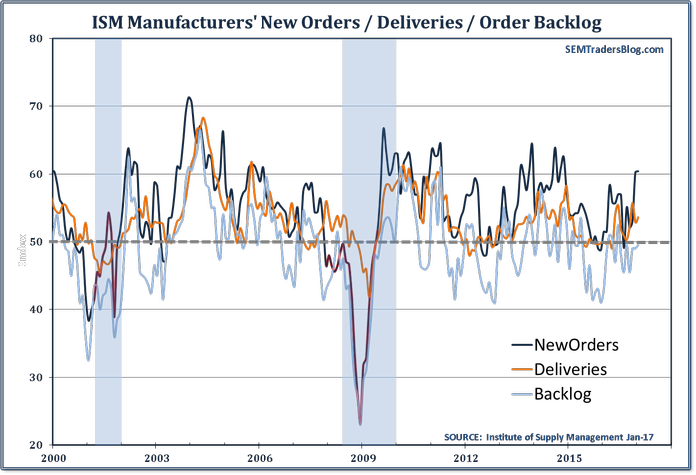 That big jump in New Orders is encouraging. It hasn’t filtered down into so much activity we are seeing manufacturers struggling to keep up, but it easily could morph into that, especially when you look at Consumer Sentiment (another indicator that we get early in the new month). 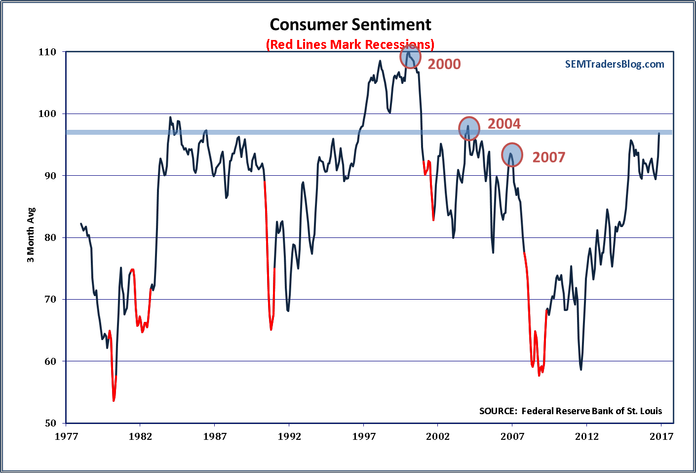 I put that blue line in there to show the current level of sentiment. Without siding with one political party over the other, the DATA tells us the election and inauguration of our new President  (along with something rare — the same party controlling the White House & Congress) has ignited enthusiasm in our country for whatever reason. Consumer Sentiment has not been this high since 2004. This could be an important development and provide some strong winds at the back of our economy.

I think that last paragraph is important to any of us when we are making a judgement about the economic outlook — it needs to be about the DATA, not our opinion of the person in the White House. Over the last couple of weeks I’ve begun to introduce you to my latest research focus — understanding the behavioral biases we all have when making decisions. (Check out the entries here and here or my Podcast discussing it here) I mentioned in those articles the last two books I had read. I’ve now moved on to another one, Thinking Fast & Slow by Daniel Kahneman (the subject of Michael Lewis’s latest book). This one is a bit more academic and a tougher read, but it looks at how we make decisions and interpret data from a psychological perspective.

I was originally planning on discussing two passages I read last night as they directly relate to this week’s blog topic. However, I just noticed the time (another busy day of calls and meetings) as well as the length (my readers have encouraged me to not be so long winded), so you will have to click back tomorrow to hear what Professor Kahneman had to say and what it has to do with our President.

It’s “Jobs Day” in the US where we get a peak at the labor market activity in January. Since the election, most economic data has lost its ability to impact the market. I’ll have more on the jobs data in my “Chart of the Week” later today.

Yesterday I began discussing the latest book I’m reading by  Daniel “Danny” Kahneman, one of the subjects of Michael Lewis’s latest book The Undoing Project. Thinking Fast & Slow is a discussion of how our brain works from a psychological perspective. Professor Kahneman divides our brain into two components, System 1 & System 2. System 1 is our “instinct”, the part of the brain that does not really have to think.  System 2 is the more involved part of the brain that System 2 calls on when it does not have an immediate answer. You would think System 2 is the harder working part of the brain, but Danny (and his partner Amos) have performed hundreds of studies that show our System 2 brains are lazy and like to take short-cuts (called heuristics). I’ll have much more on that in the weeks, months, & years ahead as these heuristics allow us to PREDICT the mistakes are brains are likely to make. Knowing the predictable mistakes a specific client is prone to allows us to create a portfolio designed to overcome those mistakes.

Anyway, back to this week’s discussion on the President.  When introducing the “halo effect”, a term common in the field of psychology, but unfortunately not in every day life, Danny actually used our opinion of the president as the example:

“If you like the president’s politics , you probably like his voice and his appearance as well . The tendency to like (or dislike ) everything about a person— including things you have not observed— is known as the halo effect.”

This begins to lead to all kinds of biases, but what I’m witnessing more and more in our society is confirmation bias. Danny goes on to discuss how and why this happens.

“When System 2 is otherwise engaged, we will believe almost anything. System 1 is gullible and biased to believe, System 2 is in charge of doubting and unbelieving, but System 2 is sometimes busy, and often lazy. Indeed, there is evidence that people are more likely to be influenced by empty persuasive messages, such as commercials, when they are tired and depleted. The operations of associative memory contribute to a general confirmation bias. When asked, “Is Sam friendly?”different instances of Sam’s behavior will come to mind than would if you had been asked “Is Sam unfriendly?”A deliberate search for confirming evidence, known as positive test strategy, is also how System 2 tests a hypothesis. Contrary to the rules of philosophers of science, who advise testing hypotheses by trying to refute them, people (and scientists, quite often) seek data that are likely to be compatible with the beliefs they currently hold. The confirmatory bias of System 1 favors uncritical acceptance of suggestions and exaggeration of the likelihood of extreme and improbable events.” 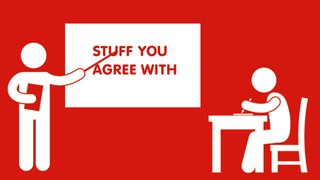 Let’s think about our society today. We are all so “plugged in” with all kinds of media messages coming to us via our phones, tablets, and computers our System 2 part of our brain is constantly busy. When System 1 hears something, it asks System 2 if it is true and the response tends to be “sure, sounds right to me” before moving on to something else. In addition we are able to pick our “news” source in our social media or smart phone feeds. If we don’t like something we simply block the person or delete the app. 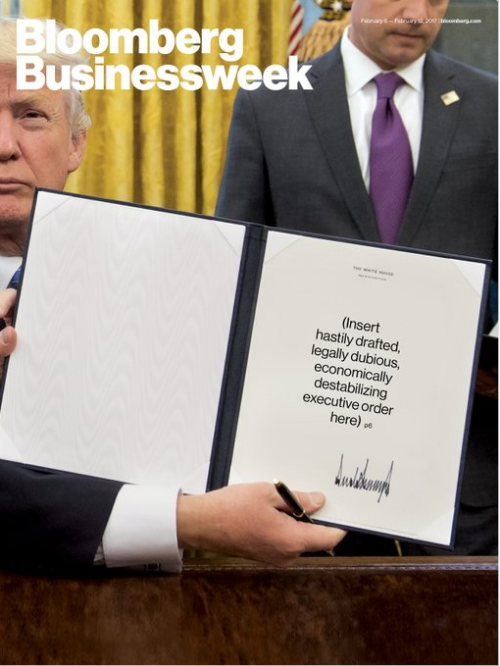 I’m seeing something akin to the “Is Sam unfriendly?” example Danny uses. All day long (especially on Bloomberg, who seems hell bent on proving why they were right in predicting Hillary Clinton would be the next president — the cover of the latest Bloomberg “Business”week is to the left) we see stories and discussions along the lines of “Is Donald Trump a bad (or dangerous) president?” Whether on purpose or not, the media is biasing our opinion of the President and our policies and this can become destabilizing to our country, the markets, and the economy.

We cannot change how the media discusses the current president, or any other future president. They will try to sensationalize everything because that means higher ratings or more clicks. What we can do individually is reverse the media’s questions and seek DATA to answer. In other words, try to take the opposite side of the argument. If they are asking “Is Donald Trump a bad president?” you should seek DATA to prove he is a GOOD president. Try it with anything in your life this week and see how it changes your perception of things.

About Jeff Hybiak, CFA
New Kent, VA
Jeff joined SEM in October 1998. Outside of SEM, Jeff is part of the worship team at LifePointe Christian Church where he plays the keyboard and bass guitar. He also coaches a club soccer team.
Previous Post : How much is a job worth?   Next Post : Fundamental Support for Rally