Is this the first canary?

Most of you probably didn’t notice, but a $693 million loan lost 1/3 of its value in the past week. It wasn’t a company anybody has heard of, which is part of the problem. Clover Technologies, a company that recycles printer cartridges, cell phones, and other hard to dispose of items, was able to borrow this much money with essentially no covenants on how much leverage its private equity owners were allowed to put on the balance sheet to boost dividends. (Read more about it here)

We have the Fed and normal human behavior to thank for companies with horrible balance sheets like Clover to borrow at rates nobody would have imagined 10 years ago. With the pushing rates as low as possible and the belief they stand ready to bail anybody out, the ‘investment grade’ corporate bond market has 33% more leverage now than it did just before the financial crisis.

Granted, Clover Technologies was a “junk” rated bond, but it is an example of what happens when bond holders realize a company will be unable to pay back its debt. Everybody rushes to the exits and collapses the value of the bond. Remember, this unprecedented amount of corporate debt is an asset for somebody else. So when somebody cannot pay back their debt, somebody else’s assets fall in value. 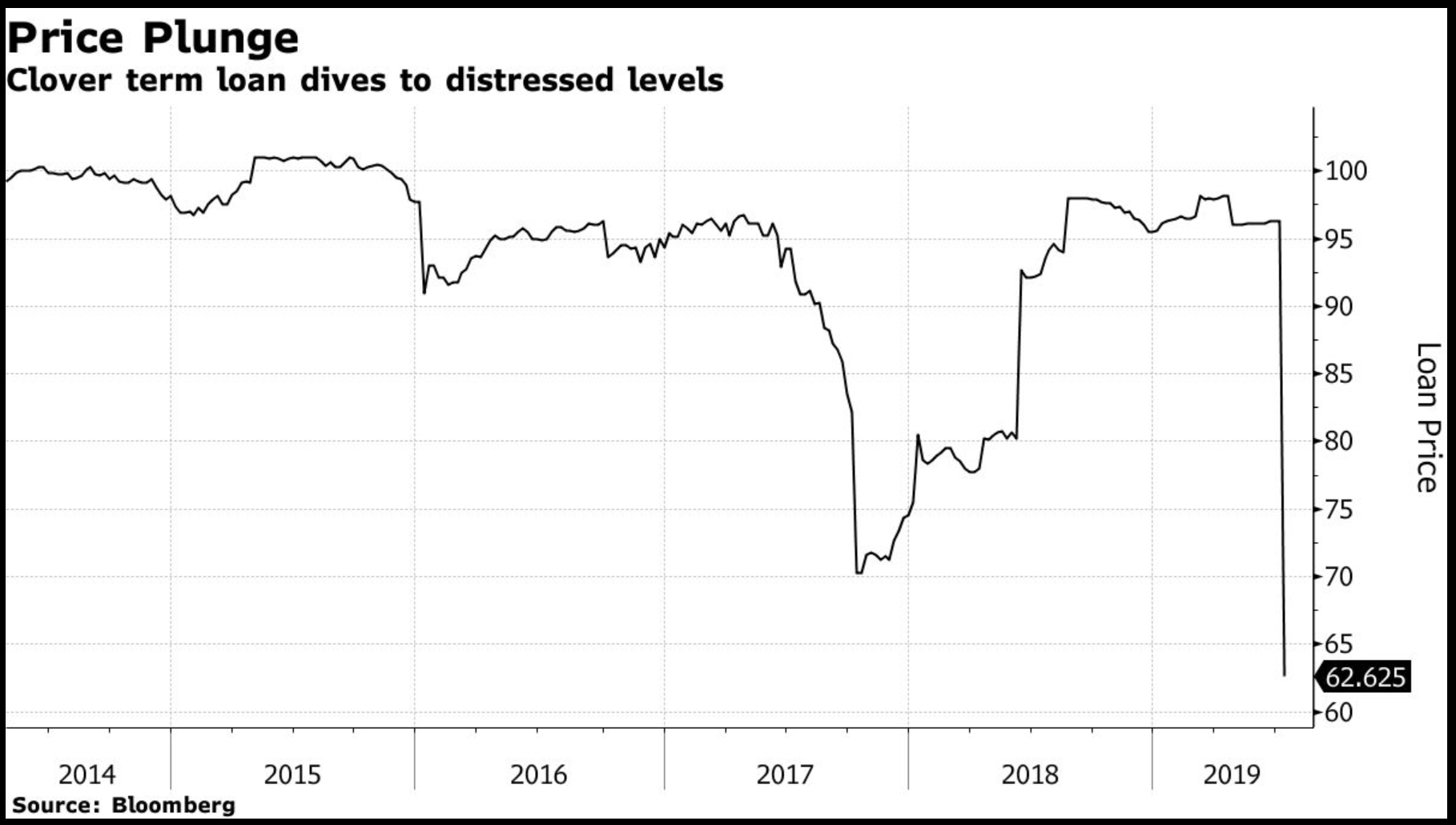 We won’t know until it is far too late if Clover Technologies was the “canary” for the corporate grade bond market. Do you remember Cendant? They were a relatively small company who in 1998 reported the first accounting scandal that would ultimately cause the stock market to implode from 2000-2002. It would be several years before WorldCom, AOL, Lucent, Waste Management, Global Crossing, and of course Enron. Investors realized they couldn’t trust the accounting reports from some of the largest companies in the S&P 500 so started selling every chance they got.

Do you remember Merit Financial? They were the first sub-prime mortgage lender to fail — in May 2006. It wasn’t until January 2008 when Countrywide failed that investors began to take notice. Despite assurances from the Federal Reserve that it was “contained” to just some regional sub-prime borrowers, the freely available money lenders were giving to anybody who wanted to buy a house ended up nearly bringing down the entire financial system.

Bull markets cause investors to give way too much money, with very little due diligence to companies that do not deserve it. We saw it in the late 1990s, again in the mid-2000s, and have seen it happen again the last 5 years. Clover is one of thousands of companies who were given loans because rates were low and money was freely available.

Look back at the last two bubbles that burst — it was two full years from the first failure before investors finally noticed. Regardless of how long it takes to come to fruition a simple understanding of math and economics tells us this is going to end very badly. We still have time to prepare. By far our most popular article ever is our recent “Investment Grade Junk” research report. In it we walk through the huge issues the bond market is facing. I can say with confidence Clover Technologies will not be the last corporate bond to implode.

By the way, I took a quick look at our bond positions and am happy to report none had any position in Clover. Even if they did, most positions are less than 1% of the mutual funds we own, so even one company failing would not hurt us much. The time to be concerned (and all the way out of high yield and BBB-rated bonds) will be when the market participants start to ask “who’s next.” Based on our real-time history going back 27 years, I’m confident by the time that starts to happen our trading systems should have already moved most of the money out of those markets.

Finally, keep in mind the Fed cutting interest rates WILL NOT save these heavily leveraged companies. Remember, they were cutting rates rapidly in both 2000 and 2008.