The markets seem to be in a holding pattern ahead of the election. While the polls show Wall Street’s favorite candidate, Hillary Clinton should easily win, market participants are weary of two things.

1.) The anger towards Donald Trump bringing out Democratic voters that will lead to the Democrats sweeping Congress (see Elections & the Markets for more)

2.) A surprise election similar to Brexit where the polls are wrong and enough people come out of the woodwork to support Donald Trump.

Either outcome would lead to widespread uncertainty, which is never good for investors.

Since the Fed ended QE3 back at the end of 2014 the market has been a wide trading range while not really gaining much ground. 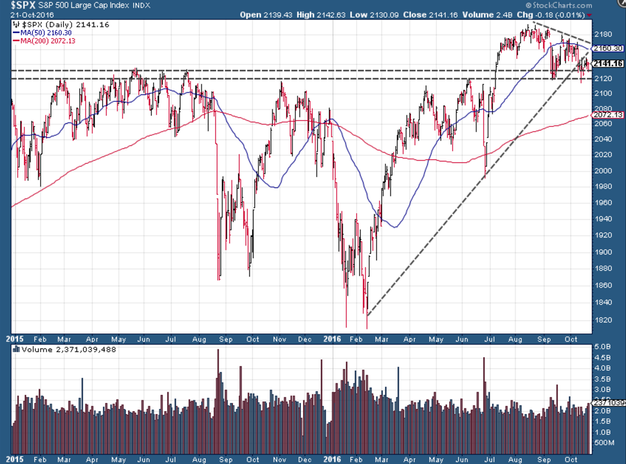 Situations like this are a perfect example of why we insist on well tested, mechanical trading systems to help navigate the  markets. They may not be perfect and often will struggle in broad trading range markets, but they still capture enough of the major up trends all while missing enough of the major downtrends to keep clients on track in their retirement plans. The key is to remain patient with these investments until those trends develop. (see Tortoise vs. the Hare)

Like this election, making predictions on the outcome is a losing game.

Stocks continue drifting on little meaningful news. The “Merger Monday” rally lost its enthusiasm yesterday as the day wore on.  I know market participants tend to celebrate mergers as a sign of opportunities in the market, but I tend to look at them differently. Mergers tend to take place when companies do not have any other options for growth. Rather than investing in new technologies or product lines they find it easier to purchase somebody else. This may create economies of scale and help marginal profits, but often times the COST of the merger end up out-weighing the benefits.  I am by no means a merger expert, so maybe there are some out there that will make sense. For me I find it interesting that Time Warner, who was purchased by AOL at the very end of the tech bubble is once again being acquired by a tech company hoping to extend its distribution channel.

Last week I came across a quote that really summed up a lot of what we’re doing at SEM……….Nothing.

It’s not for lack of trying. We are constantly researching & testing new ideas to improve our investment programs. Investing is a difficult endeavor by itself, but trying to find MECHANICAL systems that work well throughout all types of markets increases the difficulty level exponentially. We refuse to make changes just for change’s sake. We understand from our testing there will be times where our strategies will under-perform the stock market (especially in the later days of a bull market). In nearly all cases we’ve found systems that do well in that period do not do well at all in the bear markets, making our overall risk/return ratios of our programs worse off if we attempt to capture too much of the late stage bull runs. 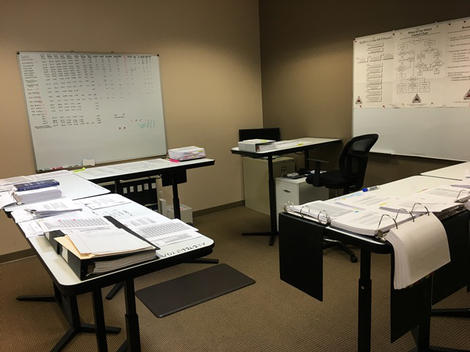 That said, it’s not for lack of trying. This summer we rearranged our office to create a research room to help organize all the tests results. In my 18 years of working for SEM I’ve never seen us have so many trading projects in the works. We’ve had a lot of misses, but we’ve also learned some things and made a few breakthroughs. One of the more exciting breakthroughs has been inside our EGA program. We are in the final stages of testing and development with some improvements for EGA. The details will be coming soon.

SEM has been around for 25 years for a reason. I can only think of a hand-full of tactical managers that have survived as long as we have. The secret to our longevity is our discipline. Sometimes doing nothing has far greater benefits than making changes. Most of the time when I’ve seen a tactical manager fail is when they abandon their core strategies and philosophies and make changes just for change’s sake.

As we continue to bide time ahead of the election, I thought this article from Business Insider was interesting. It is an interview with Jessie Felder (his blog also appears in my “Nerd Links” as one of the sites I trust to tell me what’s happening inside the minds of traders and moving the markets). Mr. Felder, a well respected money manager was discussing what he sees being the catalyst for the next market crash.

He wasn’t talking about an imminent crash, but rather the set-up that is developing and the scenario that would cause stock (and likely bond) prices to move lower despite (or because of?) the central bank’s attempts to keep asset prices inflated. Specifically Mr. Felder is talking about the “risk parity” trade and all the institutions using “short vol” strategies to help enhance their returns.  Here’s an exert:

“So you have a massive short vol trade and vol goes up 40%. Then you have all these guys trying to cover their shorts, billions and billions of dollars of short volatility,” Felder said. “It’s going to push volatility up higher. And then you think about OK, who’s making a market in this stuff, right? Because, if all these guys are short vol, and then they try and cover their vol shorts the market makers are going to have to buy volatility. So they’re going to be essentially short with– buy volatility, so they’re going to be short stocks, and so then they’ve got to offset that trade. The volatility trade has repercussions in the stock market.”

Essentially it’s the VIX tail wagging the S&P dog and with a massive short trade pushing volatility higher, you start to get concerned about all the volatility targeting funds out there.

“Think about all of these variable annuities or whatever, and say we will reduce our exposure when volatility goes up. Risk parity, trying to do the same thing. And there’s just a massive amount of money that’s now tied to volatility targeting and risk parity. And you can just start to see OK, that’s a lot of risk structurally in the way investors are positioned in the markets that we have never seen before.”

The extreme case of endowment funds selling volatility to increase their meagre returns is happening now and Felder said even pension funds, who can’t buy enough corporate bonds have started selling credit default swaps as synthetic exposure to corporate bonds. He’s actually speechless at the thought of pension funds that were incredibly underfunded, now being your counterparty if you are buying CDS.

Putting this into the context of the business cycle, the build up of risk in this area is seen as a consequence of central bank intervention to suppress volatility and Felder said the simple lesson we should all take from these cycles that we’ve seen over the last 20 years or so is that the longer we go without a downcycle, the more risk is built up. 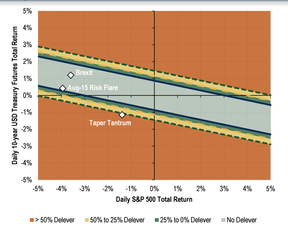 ​​This isn’t anything new, but it also is something we need to keep in mind. We discussed the “risk parity” trade back at the end of August. As Mr. Felder said, “the longer the market doesn’t go down, the more confident investors become that it won’t ever go down, which is when they start taking too many risks using false assumptions.”

I’m running out of things to say about this market. There’s been little meaningful news & everyone seems to be waiting for the election and/or Fed meeting.  Here’s a chart of the S&P 500 for the month (yawn!).

The market activity picked up a little bit on Thursday. Despite a slew of earnings reports this week, the sell-off in sovereign government bonds late Wednesday and throughout the day Thursday was the news of the day. There really wasn’t much of a catalyst for the sell-off other than market participants are getting a bit spooked that the central bank fueled government bond bubble is near an end.

Speaking of getting spooked, retail investors appear to be very worried about the election. According to Bespoke Investment Group last week saw the biggest weekly outflow from equity mutual funds since August 2011 (during the Debt Ceiling Circus). Often times this is a contrarian indicator, although recently spikes in outflows have had little impact on the market one way or the other. 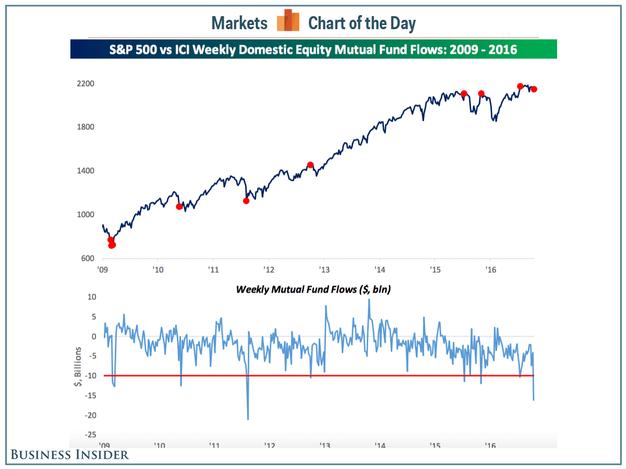 It’s not just retail investors. We’ve seen a marked increase from our clients asking if they could be placed in cash until after the election. If you click over to our last two Charts of the Week we addressed the short-term and longer-term impact on the markets. We understand the angst investors might be having, but often times the “concern” turns into a missed opportunity if the market either reacts too far one direction ahead of time or the reason for the concern does not come to fruition.

Like the retail investors that cashed out of their mutual funds last week, any clients sitting in cash could miss a sharp “relief” rally in the market. Unlike the buy & hold retail clients our systems are designed to look for trends and if the “concern” turns into a “panic” we can already see many of our systems are prepared to head to the sidelines automatically. This takes the guess work out of the investment process and helps keep us from making emotionally lead investment decisions.

Be sure to check out our Current Allocations for the latest signals from our trading systems.