No Frame of Reference

Last week we went through what I believe will be looked back at a major change in the political structure of our country. History books are always written with the benefit of hindsight, cherry-picking specific events to make it seem that the way history played out was predictable. (It’s not just history writers that do this, we do it in our every day life & we call it “hindsight bias”.) In this case any readers of this blog, subscribers to our What Really Matters Podcast, or seminar attendees the past five years have heard me discuss the major changes our country was about to go through.

The events did not always play out how I would have liked, and certainly will not play out in the future according to my idea of the “perfect scenario”, but I do know one thing — most people will struggle to understand what is happening because it has not happened in their memorable lifetimes. The way our brains work is we try to make predictions of the future based on our memories. We try to find similar situations and then make our predictions based on that. Those on the left seem to think Donald Trump is a young Adolf Hitler, while those on the right think he is the reincarnation of Ronald Reagan. 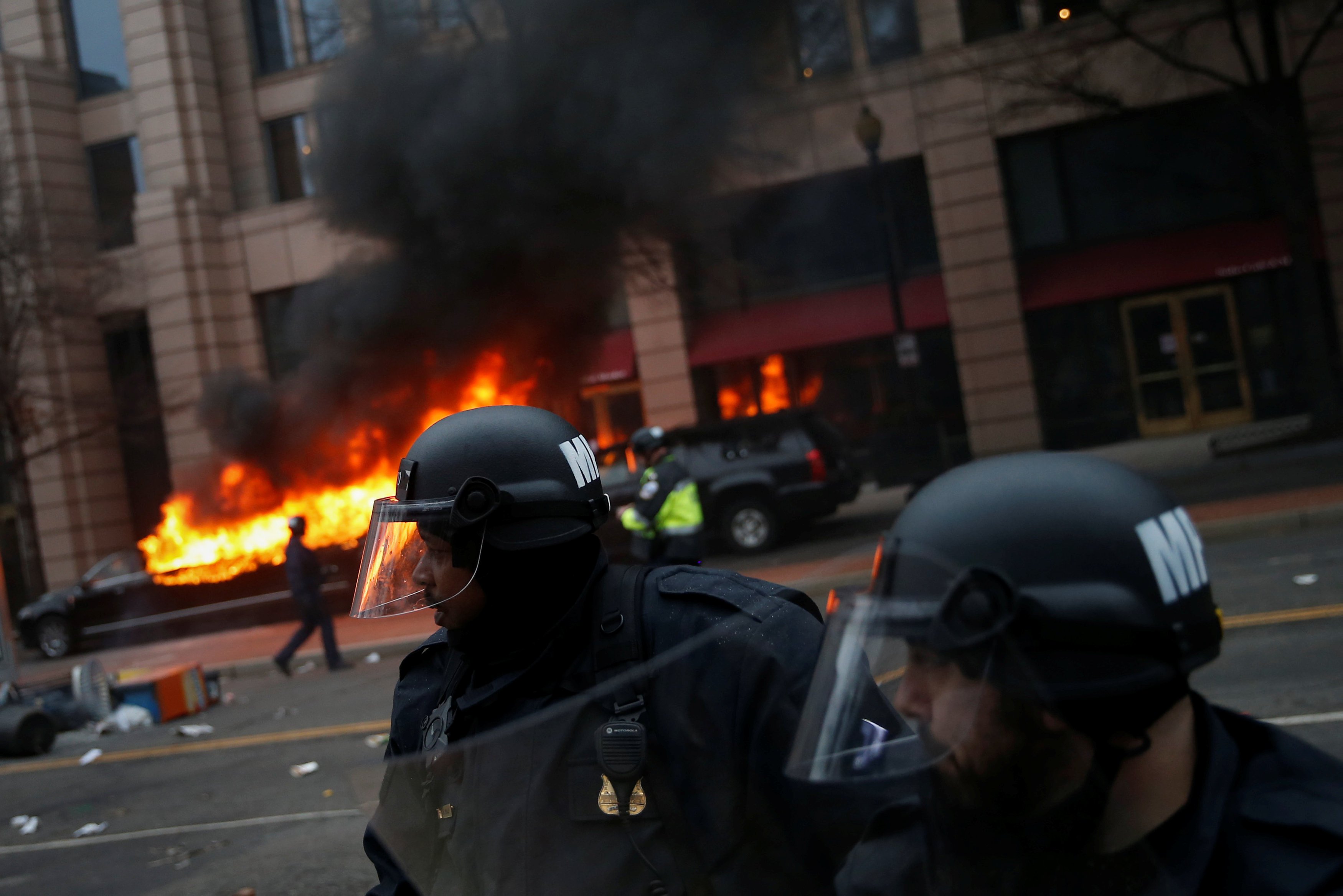 Taking a step back and looking at it objectively it is hard to find any comparison to our new President. This means as events unfold we become uncomfortable as we search for a new frame of reference. This causes our emotions to begin to run wild, which can cause severe reaction. I fear the violent protests we saw in Washington DC on Friday is just a preview of how ugly things might get. I also think those on the right that are betting on a return of the Reagan years will be deeply disappointed and are risking losing a hefty sum. I hope I’m wrong on both accounts, but the current situation warrants caution, not the overwhelming confidence so many seem to have on the outcome of the Trump Presidency.

When we deal with uncertainty, our brains do interesting things. They grasp for a frame of reference or a comparison to base their forecast on. I listened to an on-going debate all day yesterday on Bloomberg about which president Donald Trump will resemble the most.  I saw all kinds of justifications why this would be like Reagan, Bush I, or Bush II along with a few citing Hoover and a few other less kind comparisons. The “experts” with the foreign accents were the least kind as was the outgoing head of the President’s economic council.

Last week I introduced you to a book I was reading (Misbehaving by Robert Thaler) where I included some of the mind blowing research into economic (and thus stock market) theories and most importantly why the traditional theories do not work in the real world of humans. I’d encourage you to go back and learn the few concepts I introduced as they can help you whenever you are dealing with uncertainty, which in investing is a daily occurrence. I personally would encourage anybody wanting to learn more about why the economic (and traditional investment) models do not work to pick up Misbehaving, although I am now reading The Undoing Project by Michael Lewis (the author of The Big Short, Moneyball, The Blind Side, and many other fascinating non-fiction stories.) You may want to read The Undoing Project first. The subjects of Lewis’s book (Daniel Kahneman & Amos Tversky) are key players in the early story of Thaler’s Misbehaving. Plus Lewis has a knack for taking very complex topics and making them both interesting and easy to understand. I’m about 78% through the Undoing Project & Dr. Thaler is just now being introduced into the story.

Anyway, back to where I was going today, while reading Misbehaving I was re-introduced to Professor Robert Shiller and some of his earliest work on investor behavior. I’d heard of the “Shiller P/E” of course and knew of his book Irrational Exuberance, but hadn’t really studied him too much. In Misbehaving Dr. Thaler goes into great detail how Dr. Shiller played a key role in debunking the “Efficient Market Hypothesis” with his 1980 paper “Do stock prices move too much to be justified by subsequent changes in dividends?” His conclusion was based on the present value of dividends (which are predictable) compared to the actual stock prices. If the market were efficient, meaning all “known” information was priced in, he argued the stock prices would follow a seemingly normal pattern that tracked the present value of all future dividends.  This chart from his paper (courtesy of Peter Elston’s Investment Blog) shows the result: 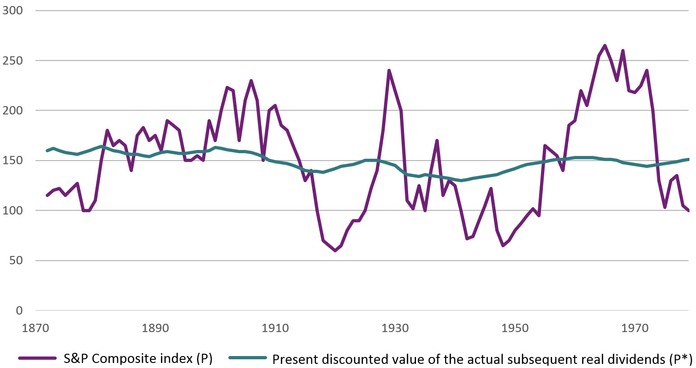 Of course as most of us have observed, stock prices can shoot way up and way down on essentially no news which flies completely in the face of an “efficient” market. The 1987 crash followed shortly after a seminal debate between Dr. Shiller & Dr. Gene Fama, one of the “fathers” of the efficient market hypothesis. To most “rational” observers that was the “mic dropping moment” for this argument. Ironically, Dr. Fama, one of the founders of Dimmensional Fund Advisors (DFA) continues to stand by his “rational, efficient” market theories despite real world events continuing to show far more irrational behavior than rational. Even more ironically, both Dr. Fama & Dr. Shiller won Nobel Prizes in Economics in 2013. You could not hold more opposite world views than these two. I’ve added Irrational Exuberance and anything else written by Dr. Shiller to my reading list. Anybody that can stand-up to Dr. Fama is a hero in my book.

Another series of executive orders came out of the White House on Tuesday, this time related to pipeline development. This sparked a big rally in materials, industrials, and small cap stocks. (My favorite sound bite from our President, “if we’re going to build pipelines in the US we’re going to use pipes made in the US.”) This sentiment is welcome given the decades of imported materials used in construction in the US, but it is not likely to play well with our trade partners. It is still early in the presidency, but it is already clear President Trump will be like no other. I’m fascinated by the completely opposite opinions of the President. While the media and most celebrities are forecasting imminent doom, the Wall Street “experts” and investors are betting on the biggest economic boom of the past 30 years. I don’t know how many ways I can say it — we don’t know how this will end up because we have no real comparison to the new administration.

Robert Shiller, the Nobel Prize winning economist for his work on investor psychology, wrote an op-ed in the Guardian last week echoing some of the same sentiments. Dr. Shiller said the market is being supported by two “illusions” that are closely tied together. The first is the illusion President Trump is a skilled business man who will be able to transfer that success as a negotiator to “Make America Great Again”. This has led to the illusion of a new bull market as the Dow has inched closer to 20,000. Round numbers like this tend to bring in even more investors from the sidelines even though they are completely meaningless (especially considering the composition of the Dow with Goldman Sachs being the primary driver of the move from 19,000 — how are they considered an “industrial” or “blue chip” is beyond me.)

This means the higher prices and executive orders combined could give investors a false sense of security and reinforce their opinion on the future of the market. This will lead to more overconfidence and even more bold predictions. Don’t get me wrong. I think the President is addressing nearly every one of the STRUCTURAL issues I’ve cited the past 10 years. The problem is I understand how economies work (as well as math) and there is no way those issues can be fixed without some pain and sacrifice. This illusion can go on for a while, but sooner or later reality will set in and we will see what happens when overconfident investors that have too much risk in their portfolios end up learning they were wrong. When that happens is anybody’s guess, but for now we will enjoy the ride knowing our well-tested systems will be ready when some risk management is necessary.

After months of anticipation the Dow closed above 20,000 on Wednesday. While from an investment stand-point it does not mean much, investors are likely to pay attention. Often milestones like this attract new money into the market as it causes those on the sidelines or in lower risk asset classes to feel like they are missing out on something.  As we mentioned yesterday this is likely to reinforce those that believe “successful businessman” Trump will bring great gains to the economy and stock market. I truly hope that is the case, but I fear we have not seen the reaction from other governments to his brash executive orders. While America has been getting the short end of the stick for too many years, we do have to realize turning the tables will cause pain in other parts of the world.

Anyway, back to the 20,000 milestone. This chart from Business Insider shows past milestones for the Dow. 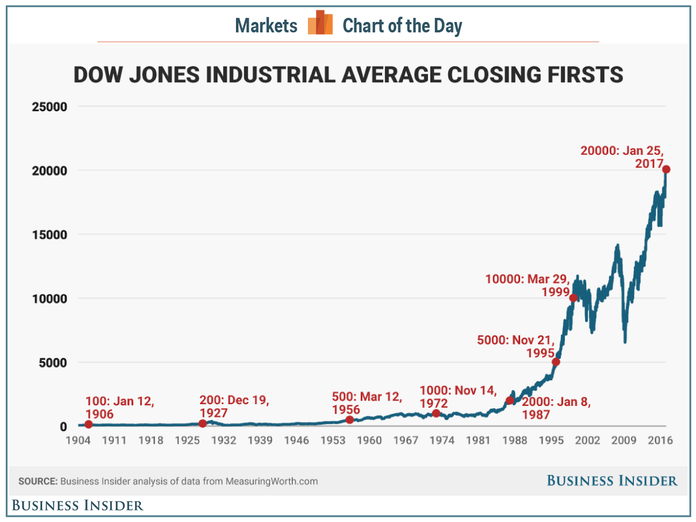 After doubling in less than for years from 1995 to 1999, it took nearly 18 years for the Dow to double from 10,000 to 20,000. Call me Mr. Sunshine (as many people do), but that should serve as a warning to anybody just now getting excited about stocks because of this milestone. The more the markets rise, the more risky they become.

As a side-note, please keep in mind this is simply my OPINION. Our trading systems have been strongly bullish since late November and enjoyed some very nice gains yesterday. The difference is they could care less about this round number for an index that is made up of 30 stocks that do not fully represent the market or US economy. What they care about is the level of risk developing inside the market. There is not anything on the horizon warning of us such risk, but it could emerge at any time. We will be ready when it is.

About Jeff Hybiak, CFA
New Kent, VA
Jeff joined SEM in October 1998. Outside of SEM, Jeff is part of the worship team at LifePointe Christian Church where he plays the keyboard and bass guitar. He also coaches a club soccer team.
Previous Post : Fundamental Support for Rally   Next Post : Why SEM?