The first quarter is in the books with the S&P 500 closing up 5.5%. Given this impressive performance for US based large cap stocks, you would think it was a quarter of good news. Unfortunately for long-term investors it was a quarter based on EXPECTATIONS of FUTURE good news. Despite overwhelming optimism that started peculating shortly after Donald Trump’s victory in November, the actual data has yet to live up to those rosy expectations. The jury is still out on how long the market will wait for real results before they start ratcheting down their expectations and stock prices along with it.

One place to look in terms of real data versus expectations is the reported earnings from the S&P 500 components. Already this year we’ve seen 2017 earnings expectations cut 1.5% (with the market gaining 5.5% this means the already overvalued P/E ratio became even more overvalued in Q1). Of course analysts being completely wrong about the direction of earnings is nothing new. This chart shows how analysts consistently predict a sharp rise in earnings each and every quarter (after being completely wrong the prior quarter). 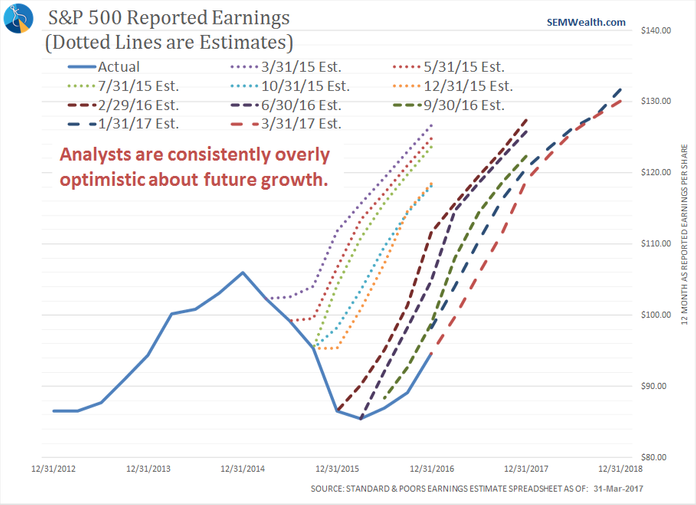 As we’ve learned in previous bull markets, this pattern can continue for quite some time. What usually sparks a bear market is a “shock” that causes investors to call into question everything they previously believed about the future. The chart above shows us analysts will be no help in keeping investors from being surprised. Daniel Kahneman in Thinking Fast & Slow tells us why investors in general tend to be wrong:

“The successful execution of a plan is specific and easy to imagine when one tries to forecast the outcome of a project. In contrast, the alternative of failure is diffuse, because there are innumerable ways for things to go wrong . Entrepreneurs and the investors who evaluate their prospects are prone both to overestimate their chances and to overweight their estimates.”

We all need to be careful in how much confidence we put in our own subjective forecasts. Remember, VERY FEW people forecast the financial crisis or the bursting of the tech bubble. Those that did were often ridiculed, black listed, and ended up out of the business before their predictions came true. Nearly everyone in the market place is CONFIDENT we will see strong economic growth simply because a Republican is in the White House and Republicans control Congress. When you combine this representatives bias with overconfidence, and mix in a little hindsight (we should have seen the last two bear markets coming, so I won’t make that mistake again) along with availability (recency) bias you have a recipe for a MAJOR shock to the market.

I don’t know when that will happen, but I am comfortable with our positioning because we focus on DATA, not our subjective interpretation of the current market prospects.

As is usually the case after a strong quarter, stocks got off to a rocky start to kick off the 2nd quarter. Not a lot can be read into one day’s action. What should be worrisome to investors is the blatant overconfidence being displayed by a wide range of sentiment measurements. One of those is the distance the S&P 500 is from it’s long-term trend.

Few people truly understand mean reversion. People understand the long-term average return for stocks is somewhere around 7-9% depending on the time frame used. What they do not understand is this average was generated by having periods well above the average and periods well below the average. Whether you go back 20, 30, 50, or 100 years the average is around the same. This means when the market generates returns ABOVE the average it is likely to have returns BELOW the average. The more above average the returns, the more below average the subsequent returns are likely to be.

This is illustrated nicely by this chart from Advisor Perspectives: 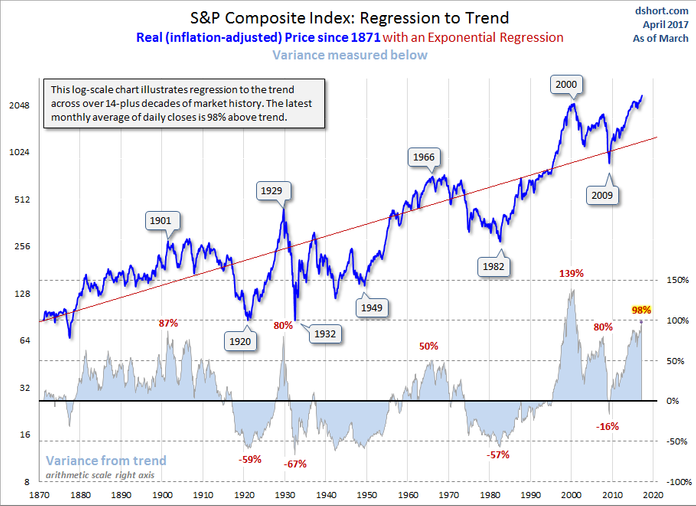 Most of us view the world as more benign than it really is, our own attributes as more favorable than they truly are, and the goals we adopt as more achievable than they are likely to be. We tend to exaggerate our ability to forecast the future, which fosters optimistic overconfidence. In terms of its consequences for decisions, the optimistic bias may well be the most significant of the cognitive biases.

Stories of how businesses rise and fall strike a chord with readers by offering what the human mind needs: a simple message of triumph and failure that identifies clear causes and ignores the determinative power of luck and the inevitability of regression. These stories induce and maintain an illusion of understanding, imparting lessons of little enduring value to readers who are all too eager to believe them.

Investors in general are overconfident in their investment ability. What’s the best way to overcome this behavioral bias? Dr. Kahneman seems to believe it is what we at SEM have known all along:

The research suggests a surprising conclusion: to maximize predictive accuracy, final decisions should be left to formulas, especially in low-validity environments (such as predicting stock market moves).

Overvalued markets can stay overvalued for longer than most managers can stay in business if they try to guess when it will end. Instead we will continue to trust our time-tested MECHANICAL formulas to tell us when it is time to expect some serious mean reversion.

Stocks are trying to gain their footing again and following the end of a positive quarter we are already seeing a stream of clients looking at the S&P 500 returns and deciding they too should have gotten those same returns. Yesterday we had 4 clients in our Tactical Bond program close their accounts citing “performance”. These clients when they opened their accounts said they had a risk tolerance of 5 -10% which left them few suitable options given the fact even a “balanced” investment could lose 20-35%. Their Tactical Bond investments have vastly outperformed nearly all other fixed income and other “low risk” investments, but at this point in the market cycle individual investors forget about their risk tolerance and move into investments that are likely to lose significantly more than they can handle. This typically leads to those same clients bailing on their high risk investments at a big loss.

The return potential in the fixed income market is somewhat limited in general, but the nice part about Tactical Bond & to a lesser extent Income Allocator is that it can still make money in this environment. We recently had another “false sell” signal, but this is something we’ve seen time and time again. We understand our system will not be perfect, but we also understand it will be CONSISTENT & most importantly UNEMOTIONAL. It will not chase returns higher and will not subjectively move to riskier assets just because we felt like we should have made more money. 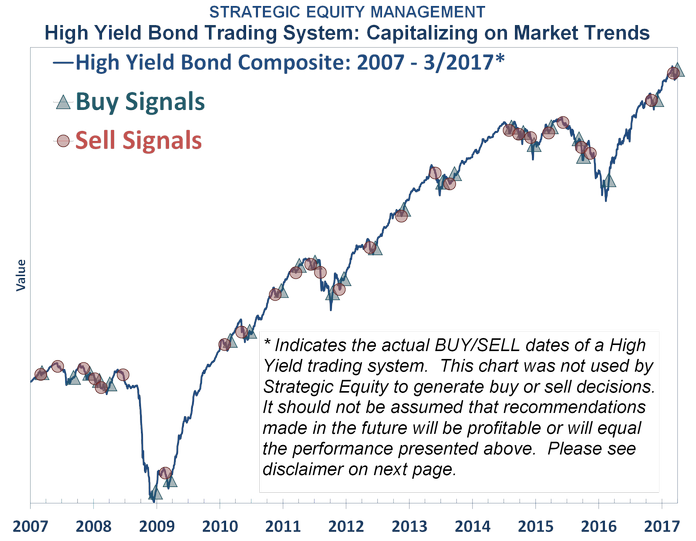 We never know when the next big loss will happen, but when it does we will be ready to move to the sidelines and keep the losses within the tolerance level of the clients inside the program. That is the key to successful investing.

About Jeff Hybiak, CFA
New Kent, VA
Jeff joined SEM in October 1998. Outside of SEM, Jeff is part of the worship team at LifePointe Christian Church where he plays the keyboard and bass guitar. He also coaches a club soccer team.
Previous Post : How 12 People Broke the Market   Next Post : 36 Years Later: A look at Reaganomics