With the Dow starting the week on an 11-day winning streak it is safe to say the animal spirits are alive and well on Wall Street. This isn’t necessarily a reason to sell stocks immediately, but it should be a reminder the potential for future gains is limited.

Robert Shiller, the person that won a Nobel Prize in economics partially for his work on investor behavior and valuations, was on CNBC warning about the ramifications of buying stocks at these levels. I’d encourage all of you to check out his interview here. One poignant quote:

[The current level of the CAPE ratio] “would suggest reducing your holdings of stocks, especially for a long-term investor. We can’t time the market accurately, but we know that when it’s this high, over the long term, it usually doesn’t do great.”

While our systems do not use these fundamental valuation metrics for trading signals, it is interesting that our Price Divergence System gave a pretty broad sell signal yesterday, taking it back to “neutral”. Essentially the system does not like the narrowness of the push into all-time high territory the past week. The Dow & S&P may be at new highs, but our internal measures show the participation from the average stock has not been as strong. This does not necessarily mean the market is destined to pull back immediately, but it is risky enough to cause our systems to take some money off the table.

If the Dow closes today up today, it will tie the longest winning streak in history. 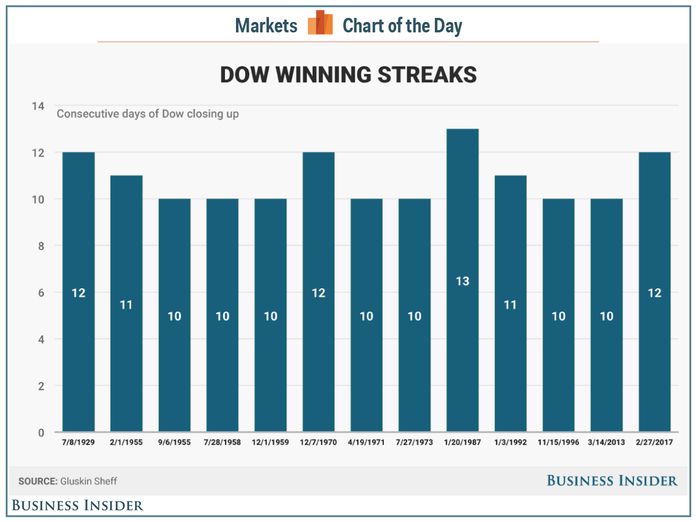 While in the whole scheme of things these 30 “industrial” stocks that supposedly represent America’s economy do not really tell us about the health of the overall economy or market, it does serve the purpose of making individual investors (and likely many advisors) believe they are missing out.

These types of rallies can go on for quite some time, although I think even the most bullish analyst will tell you stocks cannot go up every day. Those that are somewhat realistic will even warn investors the market would be better off if we could get a 5-10% sell-off to squash some of the “animal spirits”. When that happens is anybody’s guess. As is often the case, it will most likely be caused by something few at the present time are predicting. Of course with the benefit of hindsight, most market participants will tell us it was obvious.

The Dow’s winning streak is over, but based on the reaction in the futures market to President Trump’s speech before a joint session of Congress, the stampede into the large cap indexes is not over. As there has been since the election, the President’s IDEAS on economic stimulus have ignited an enthusiasm we have not seen in quite some time. Of course it was obvious he will have a fight on his hand with Congress when he received a chorus of boos even when he said he planned to find a plan that offered, “better health care, more choices, and lower costs.” Some Democrats have openly said they will oppose anything he does.

Despite that fight, you can’t fight the enthusiasm right now. The simple fact sentiment measures have hit extremes, such as the NDR Crowd Sentiment reading, is not a sell signal by itself, but it is a warning that it will not take much to spark a sell-off. 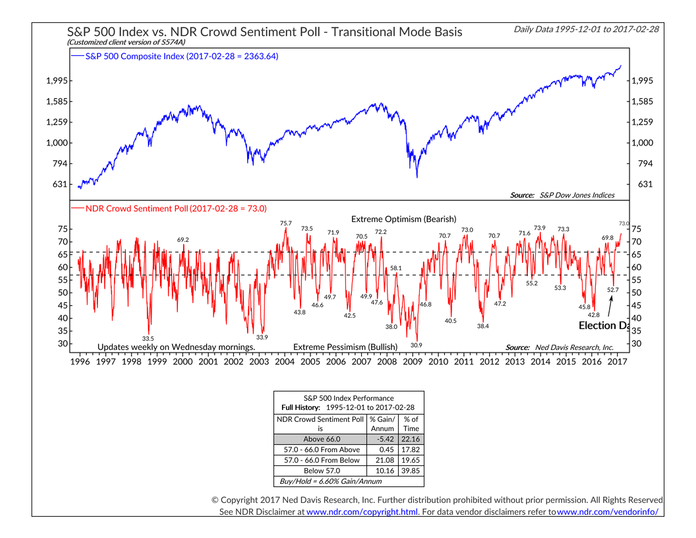 Apparently a “more presidential” Donald Trump (whatever that means) was enough to bring even higher highs for the market. The furious rally on Wednesday pushed stocks to new all-time highs once again. The Dow crossed 21,000, tying the fastest move between thousand point intervals in history. While I understand the percent changes are vastly different, but it is interesting based on my observations of investor behavior that the only other time the Dow moved this fast (24 trading days) was the move between 10,000 and 11,000 in the spring of 1999.

Yesterday the NYSE released its latest margin debt balances giving us another data point on the “animal spirits” alive in the market. When investors (or speculators in this case) are willing to borrow money to buy stocks it is a clear sign we may be approaching levels where the market participants are TOO optimistic. As usual, Advisor Perspectives does a good job of illustrating the current data relative to history. 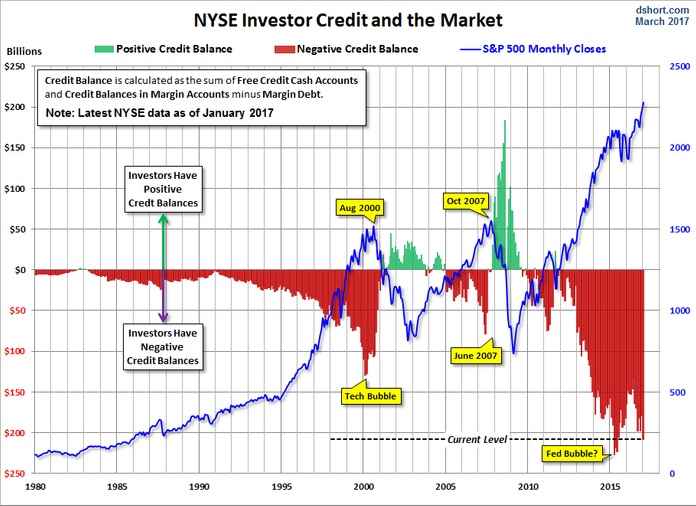 Not only is there not “cash on the sidelines” that stands ready to support stocks during a correction, this sets things up for margin calls should stocks begin to fall (stocks are collateral for the margin debt, so when their value drops the banks force them to sell stocks to pay back their loans.)

Remember, this by itself is not a “sell” signal, but it is most certainly a warning to those that are looking to put more money into the markets or have too much stock exposure relative to their risk tolerance.

While the market slipped a bit on Thursday and is looking to be a slightly lower to start the day, my conversations the past few weeks as I’ve traveled have made it obvious the strength in the market is causing investors to both change their outlook as well as their memory.

Last weekend I was continuing my reading of Thinking Fast & Slow by Daniel Kahneman and stopped on this passage.

“A general limitation of the human mind is its imperfect ability to reconstruct past states of knowledge, or beliefs that have changed. Once you adopt a new view of the world (or of any part of it), you immediately lose much of your ability to recall what you used to believe before your mind changed.”
― from “Thinking, Fast and Slow” 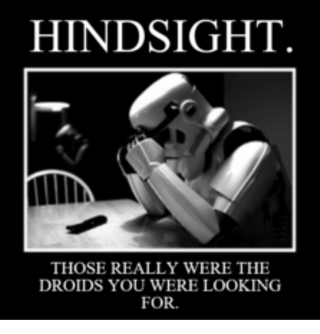 Having been with SEM for 18 years means I’ve dealt with clients and advisors during the past two market bubbles. Very few of them saw much risk in the market despite all of the DATA I provided to show them we were in a bubble. Having lived through the aftermath, they now look back and say “obviously we were in a bubble.” As Dr. Kahneman points out, once we know the RESULTS our brains reconstruct the past. This leads to predictable mistakes in the future.

Our brains have then tricked us into believing not only should we have seen it coming, but we will be able to see the signs of the NEXT bubble and thus be able to escape before it bursts. Be careful falling for that trap.

About Jeff Hybiak, CFA
New Kent, VA
Jeff joined SEM in October 1998. Outside of SEM, Jeff is part of the worship team at LifePointe Christian Church where he plays the keyboard and bass guitar. He also coaches a club soccer team.
Previous Post : Jumping the Shark   Next Post : Why are people so upset?