The Other Side of Euphoria

I can’t think of any other word to describe the stock market’s reaction to the election of Donald Trump than “euphoria”. Despite what the so-called experts predicted, the election of Donald Trump was not met with a market crash, but rather a massive inflow of excitement (and cash) into the market environment. There have been a few bumps along the road, but each time the market has picked itself back up and surpassed the previous levels. 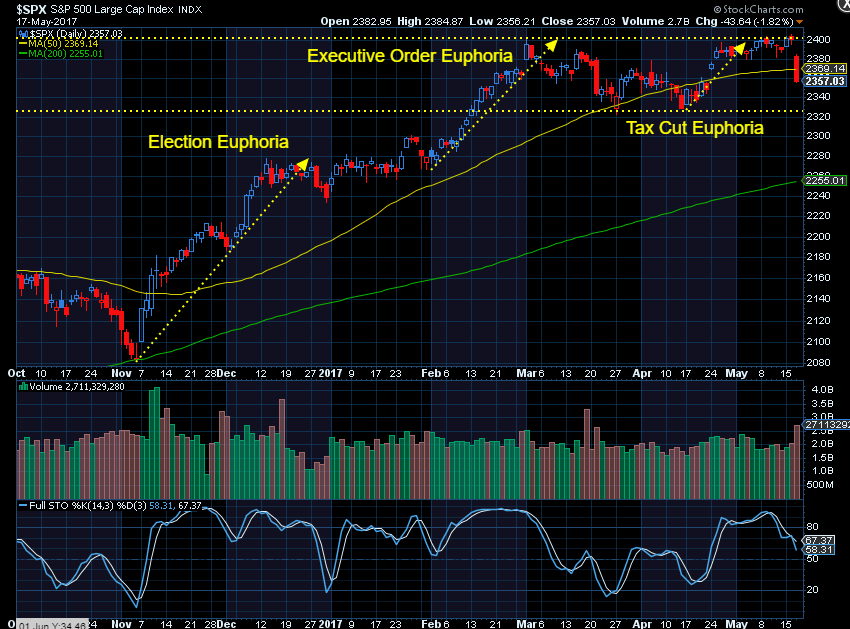 Yesterday we saw the biggest bump yet. The S&P 500 posted its biggest single day loss since last September. Unlike the last two bumps in the Trump rally (caused by the Freedom Caucus pulling their support for the 1st attempt to repeal and replace “Obamacare” & then the Federal Reserve announcing it was going to wind down its massive balance sheet), the latest concern is about the President himself. Now rather than  questioning IF/WHEN the President’s pro-stock market ideas are implemented the question facing market participants is whether or not the President will still be in office 4 years from now.

I’m not one to play into the political shenanigans going on in Washington. I have better things to do. I will say the longer this goes on the more investors/speculators in the market will begin focusing on the valuations and whether they are supported by the projected economic growth. Valuations can remain high and go even higher if strong growth is expected, but without it high valuations often turn into a bear market when the expected growth rate plummets.

As readers of this blog, listeners to our Podcast, and attendees at our client seminars will recall, my concern for 2017 has been and remains the prospect we could be facing a mirror image of 2009. Remember when President Obama took office the fear was all of his anti-market, anti-capitalism ideas that got him elected would be implemented. The market took a big leg down following his election and again after he was inaugurated. February 2009 was filled with a confident President vowing to escalate regulations, hike taxes, and throw Wall Street executives in jail. When it became apparent he would not get anywhere with that bluster, he backed down (after receiving some key advice from former President Clinton). By the beginning of March we saw a different tone from the White House. It is no coincidence (with the benefit of hindsight) as to why that marked the bottom of the bear market.

Coincidentally, despite fractionally surpassing the prior high, we could say the market (so far) peaked at the beginning of March. The market was trading on the prospect of all of the “good” Trump campaign ideas being implemented and ignoring the “bad” Trump. All the bluster from November through February has been surpassed by reality. Saying you are going to slash regulations & taxes, spend over a trillion dollars on infrastructure, create millions of American jobs, and create economic growth we haven’t experienced since the 1990s is one thing. Actually getting them done is another.

Don’t get me wrong. I fully believe the IDEAS President Trump has embraced in terms of the economy and regulation are generally good things. We have major STRUCTURAL issues that can only be fixed with massive changes in the way things are done. However, the President is running against so many obstacles the likelihood of him getting any of them done decreases by the day. I’ve warned since the election to not let your political leanings impact your investment decisions. The only way to do that is to use DATA to make the decisions, which is what we do at SEM.

I hope I’m wrong and this is simply another bump along the way, but I’m reminded often — hope is not a strategy.  This is why DATA based decisions, or in our case Scientifically Engineered Models are the only way to overcome the Behavioral Biases too many investors and their advisors exhibit — especially when you get into volatile markets like we could be entering.

About Jeff Hybiak, CFA
New Kent, VA
Jeff joined SEM in October 1998. Outside of SEM, Jeff is part of the worship team at LifePointe Christian Church where he plays the keyboard and bass guitar. He also coaches a club soccer team.
Previous Post : Not the Recovery We Wanted   Next Post : The Role of the Financial Advisor