The Problem with Predictions

Super Bowl 51 was arguably the best Super Bowl of all-time. It gave us the biggest comeback ever along with the first Super Bowl to go to overtime. At the same time we saw Tom Brady move into sole possession of several individual Super Bowl records (despite a very bad interception and even worse attempt to tackle the guy that intercepted it in the first half.)

For me it was interesting to watch from a psychological perspective. Going into the game most “experts” did not give the Falcons a chance to win. Instead they jumped out to a 21-0 and then 28-3 lead early in the 2nd half. I was watching the ESPN app and it had a nifty chart at the bottom of the page showing the probability of each team winning. From the 28-3 point until the Patriots closed to within 8 with 5 minutes to play, the “probability” was locked at 99.5% chance of the Falcons prevailing. Even after the game was 28-20 the Falcons still had an 85% chance of winning.

Throughout the game the announcers and probably many anti-Patriots fans were talking about how no team has come back from such a large deficit. A few weeks back I talked about the psychology of decision making. Yesterday we could see some of those mistakes come to the surface — Overconfidence, Extreme Forecasts (not understanding the determination of Tom Brady), the False Consensus Effect, & Present Bias are all things I witnessed during the game. It’s also something I see too many investors doing far too often.

I will have much more on this and how it relates to the current market environment in the weeks ahead.

One of my loyal readers asked me last week why it seemed I was not posting as often or in as much detail as I did in years past. My answer was more involved, but essentially my response was “I would post more in greater detail when there was something worth posting about.” I still wake up early, browse about a dozen websites and look for a “story” for the day. Since the election and especially in 2017 there just isn’t a lot of things we know. Everyone has their predictions, but as we learned watching the Super Bowl those predictions do not mean much.

While we wait patiently to see which policies President Trump will be able to push through, we continue to see far too many people placing bets on what they believe is a close to guaranteed outcome. I’ve mentioned a few times the overwhelming sentiment readings we’ve seen since the election. Yesterday I found my first sentiment reading that was not as optimistic as the others (besides the ones based on political party affiliations which are now opposite of where they were before the election….imagine that! Clearly those people have not heard my frequent warnings to not let your political positions dictate your assessment of the markets and economy.) Anyway……..

Yesterday Business Insider had a somewhat worrisome chart showing the Fed’s Senior Loan Officer Survey along with High yield Bond spreads. Unlike those that believe President Trump and the Republican Congress will do nothing except create robust growth, bank loan officers appear to be less optimistic and have been tightening their lending standards. 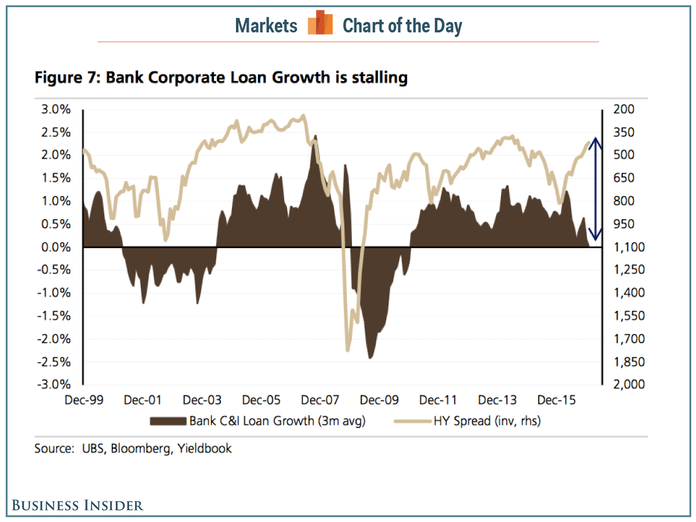 This is something that we need to watch closely as this type of tightening in lending standards typically occurs just before a recession.

There is still not a lot happening on a daily basis. We are pretty much through the bulk of earnings season giving us a better picture of how corporate America performed in the final quarter. I hope to update the analysts’ earnings estimates in our “Chart of the Week” tomorrow. After seeing a few earnings reports the last couple of days it got me wondering how this was lining up with the “Predictions” I outlined in our Winter Newsletter. Looking at where earnings are so far and how the market has performed, the bulls may be getting worried.

However, like we learned in the Super Bowl, you shouldn’t count somebody out after a lackluster quarter.

About Jeff Hybiak, CFA
New Kent, VA
Jeff joined SEM in October 1998. Outside of SEM, Jeff is part of the worship team at LifePointe Christian Church where he plays the keyboard and bass guitar. He also coaches a club soccer team.
Previous Post : Wrong Kind of Consistency   Next Post : How much is a job worth?