Will tax cuts cause job cuts?

The key talking point as Republicans attempt to accomplish one of their key campaign promises, tax cuts, has been the promise the corporate tax cuts will create strong economic growth, higher wages, and more jobs. The economic text books tell us if corporations are allowed to keep more of their profits they SHOULD be encouraged to spend more, which SHOULD create stronger economic growth. If this causes a tighter labor market or more demand for workers, corporations SHOULD hire more people and WOULD LIKELY be forced to pay higher wages.

As Nobel Prize winning economist Richard Thaler told us, economic models assume a 100% rational “economic man” that will always behave a specific way. As we all know, there is no such thing as a perfectly rational human being — that’s what makes us unique. It is also the reason most economic models do not work in the real world.

Dr. Thaler spent a great deal of time in his book Misbehaving discussing the reasons behind our behavior. For humans it is all about the INCENTIVES. We will always be looking for the best way to make our lives better. Corporate CEOs are not rational “economic men” (and women), but human beings. Therefore, we need to look at the incentives inside the tax cut bill.

John Mauldin in his Thoughts From the Frontline last week, did just that. Here’s a brief, but chilling quote for those that believe the tax cuts will create higher wages and more jobs:

As reported by the Wall Street Journal last week, CEOs say their plans for capital investment have risen to the highest level since the second quarter of 2011. That’s good news: Businesses see growth opportunities and want to add production capacity to meet them. But the same survey shows CEO hiring expectations going in the opposite direction. Hiring is not plummeting by any means, and many do plan to increase hiring over the next six months; but the majority say they will keep their headcount where it is or lower it. General Electric will cut 12,000 jobs from its power business, roughly 18% of that division’s total employment, in order to cut costs and reduce overcapacity.

How do we explain a situation in which capital spending rises but employment stay the same or falls? Automation is one answer. It lets you increase capacity without increasing headcount and expenses – you may even reduce them.

Not coincidentally, the new tax bill may remove the Obamacare individual mandate, but the employer mandate is staying in place – and healthcare costs are still rising. That too incentivizes businesses to use machines instead of people wherever possible.

Think about the INCENTIVES built in to the tax bill. Corporations can now write off equipment and other purchases immediately (rather than having to depreciate it). This will automatically lower their tax bill (on top of the reduction down to the 20% range). If they can cut costs by purchasing equipment that makes their operations more efficient they will do so. Granted, if they see demand picking up due to strong growth, they will create jobs, but investment in new equipment and having more money flowing to the bottom line does not mean we will see strong economic growth. We have have to also consider WHERE the equipment they pay to purchase is manufactured & WHERE the companies making the equipment are based. If it is not the US, how will the corporate spending create more jobs in the US?

Worse, there is a dis-incentive to adding workers relative to spending the money on new equipment. Not only do you have the typical payroll taxes, workers compensation, training, and other employer related costs, but by keeping the employer mandate of the ACA at a time where healthcare costs are skyrocketing puts workers at a significant disadvantage.

Are we to believe just because corporations have more money they will automatically give raises and hire more workers? Corporations have been flush with excess cash thanks to low interest rates, a rising stock market, and freely available capital from the Wall Street banks (compliments of the Fed’s QE program). Profits have been sitting near all-time highs, yet wages have been falling and the pace of job growth has been decelerating. 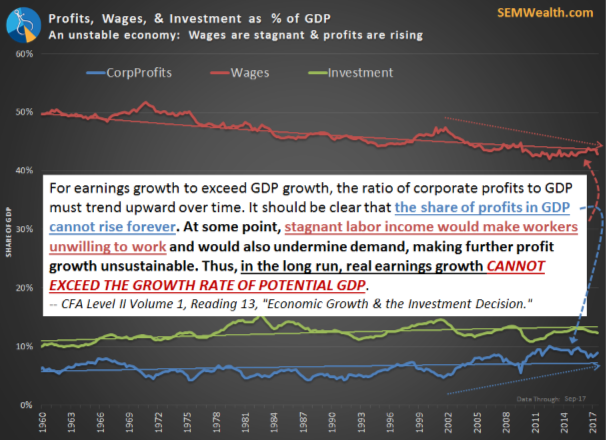 The only thing these tax cuts will do is give corporations a reprieve from the falling profit margins. If they didn’t hire workers and give raises for the last 10 years when they had record profits and plenty of excess cash, why are we to believe giving them more profits and excess cash will suddenly cause them to change what they’ve always done — maximizing the profits for their shareholders?

If Republicans truly wanted to increase wages and the number of workers, they could have written in INCENTIVES for corporations to do that. Without incentives, corporations will do whatever necessary to increase profits. It’s not their responsibility to do anything except maximize shareholder wealth. By the way, despite our President’s spin, the pace of job creation has been slowing since his election. This isn’t due to anything political, but simply a function of where we are in the economic cycle. 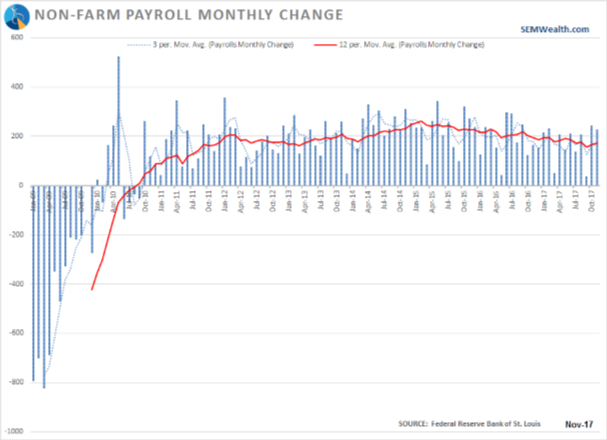 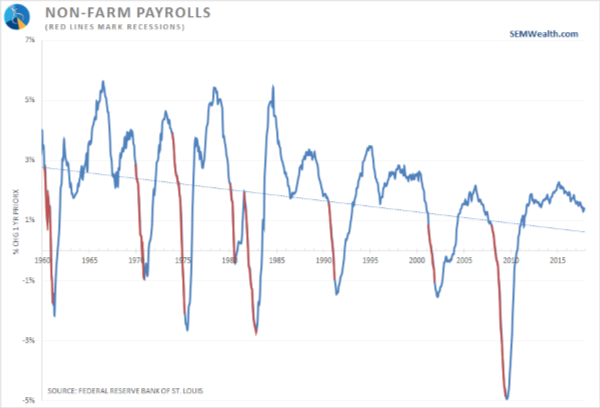 These cuts will likely be a net short-term positive for the stock market and could help push economic growth above 3% for a few quarters. However, with the incentive to purchase equipment that could replace workers we could very well look back at these cuts as the thing that pushed our country into recession. Remember, the middle class is already just scraping by, the Federal Reserve is hiking interest rates and pulling back their Quantitative Easing program, and we are 9 years into the economic recovery (far longer than most recoveries last.) As always, my subjective analysis of the economy has NOTHING to do with how we invest money. We will continue to monitor the market action and make changes to our allocation based on our pre-determined entry and exit rules. Whether the tax cuts cause short-term gains, a big sell-off, or launches a furious new phase of the bull market, we will be ready. The Republicans are spinning this as the greatest boost to economic growth in 30 years. I’m only pointing out why we need to be very wary of basing any sort of investment allocations on the economic THEORIES that tax cuts automatically create strong economic growth.

[The opinions expressed below are those of the author and not necessarily any other SEM employees or shareholders. They also have no impact on how SEM’s portfolios are managed.]

Don’t get me wrong, in my opinion, it is always good to give taxpayers more of their money to decide what to do. For years I’ve lamented the lack of business investment and short-sighted decisions by corporations to use their profits to pay dividends and buy back stock. They NEED to invest in long-term projects to create LONG-TERM growth opportunities. What I have an issue with is the way the Republicans have gone about it. The corporate tax cuts will be permanent, but the individual (minor) cuts expire in 2025. Only C-corporations will be getting a tax cut. The majority of small and mid-size businesses are S-Corporations (or other ‘pass-through’ entities) and other than a very small subset of them, their taxes will remain quite high. Some may even go higher depending on how the AMT and other deductions are handled. The biggest travesty is what they are doing to the budget deficit (even using their rosy 4% growth projections). They are pushing our country towards bankruptcy in order to pass a bill that economic theory says SHOULD work, but reality says has no chance of creating that kind of growth.

All of that said, I must say I’m by no means a socialist or even a liberal. I’m a conservative & a capitalist. I’m a registered Independent because I do not believe Republicans represent true conservatives or even capitalism any more. They’ve gone so far off the rails to protect a very small fraction of the population they have completely forgotten the middle class, small businesses, and the very people that used to be their base. They no longer care about the budget deficit and what it will do to younger generations. If you feel the same way and are still registered as a Republican, I have to ask why. Other than voting in their primary election, what else are you gaining? Do they hear your voice? Have they changed their platform? Keep in mind, most states allow Independents to choose which primary to vote in anyway. The Republican leadership has not listened to the very people they used to represent. For whatever reason, they are choosing to alienate them. The only way to get them to possibly wake up and pay attention is to see the number of registered Republicans drop dramatically. Hopefully then they would begin some self-examination and figure out they need to change or risk losing the entire country to the Democrats.

Our country is highly divided thanks to the ideological push towards the fringes by both parties. This has left a large percentage of the population on BOTH SIDES feeling like their is no party to represent them. This is an opportunity for one of the parties to attract them. As a conservative & a capitalist I clearly have my opinion as to which party I hope that is. If not, I will remain an Independent and hope we see a legitimate third party rise to take care of the middle part of our country’s political spectrum. 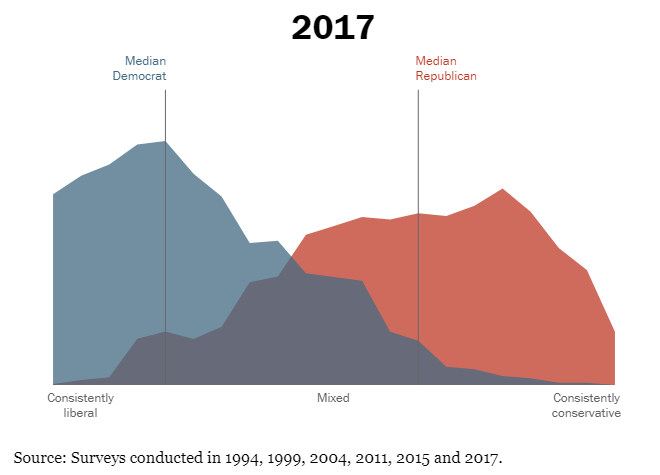 About Jeff Hybiak, CFA
New Kent, VA
Jeff joined SEM in October 1998. Outside of SEM, Jeff is part of the worship team at LifePointe Community Church where he plays the keyboard and bass guitar. He also leads a small group Bible study.
Previous Post : Corporations plan to use tax cuts on........   Next Post : What would Buffett Do?