A Dose of Reality

After celebrating the “no rate hike” announcement from the Fed Wednesday afternoon and Thursday morning, market participants seem to be shifting their attention to the REASON the Fed didn’t raise rates — economic growth is again decelerating.

While the fact remains my economic indicators still do not show signs of a recession (click here for my latest economic update).  Last week two more of my favorite indicators were released for August and like the others, we saw the economy slow significantly– enough to lower the 12 month growth forecast from 2.3-2.5% down to 2.1-2.3% in my econometric model.

I’m not sure if the market participants have yet fully grasped the bigger issue that came out of the Fed meeting (the Productivity Conundrum), but I devoted the entire “What Really Matters” Podcast on Friday to the concerns the latest Fed meeting raised for me when it comes to long-term investment in the stock market.

Whatever the market participants are focusing on, a quick look at these charts from dshort.com show on a technical basis some “gaps” may be filled this morning when the market opens.  From there we will see if buyers emerge. 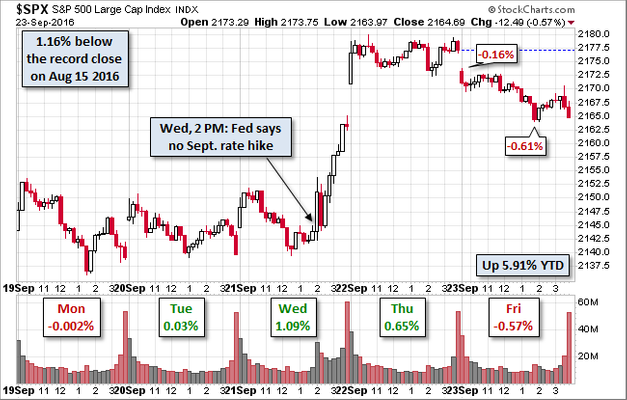 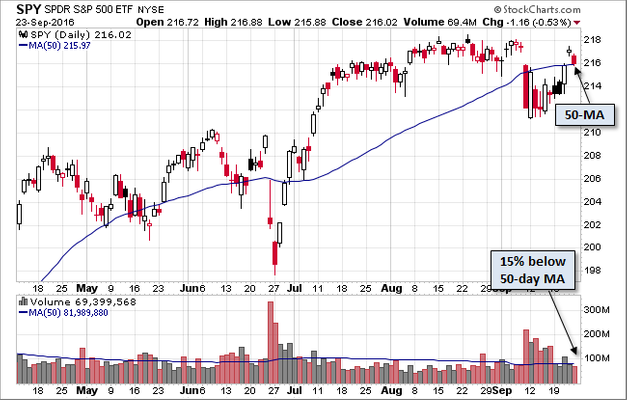 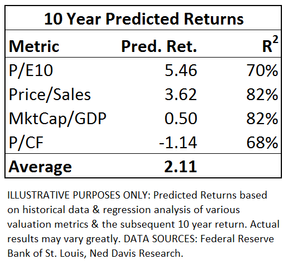 On a longer-term basis, the market continues to be at a point where buy & hold investors are likely to see returns that are far below average. Last week we looked at  a simple formula to calculate expected long-term returns (dividend yield + inflation + real earnings/GDP growth).  It gave us an expected return of 5.8%. We’ve also shown many times the high correlation between valuations and 10-year returns (most recently we looked at Price/Sales). Depending on the valuation metric used, the expected returns based on current valuation levels is somewhere between -1% and +5.5%. Based on these two completely different perspectives, it looks like a “best case scenario for long-term buy & hold investors is around 5% returns. When you factor in the volatility (risk) that will come from buying and holding stocks that return hardly seems worth it.

Last week Ned Davis Research updated a chart that looks at another way to set expectations for the market — by looking at how much of American’s Disposable Income is already invested in the market. NDR’s research confirms what we logically understand about the market — if households are underinvested there will be a strong inflow to stocks, leading to above average returns.  If they are fully or overinvested in stocks there is little money left to flow into stocks and we are likely to see lackluster returns.  Based on this research, the expected returns for stocks is now around 0%. 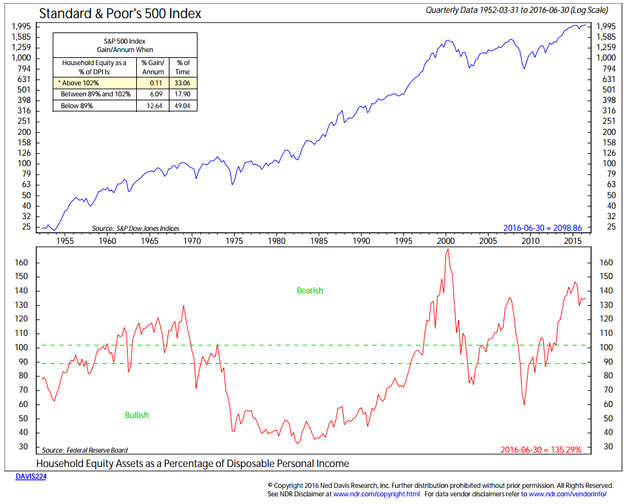 Despite this we continue to see clients moving their accounts to “lower fee, higher (recent) return” investments without paying any attention to a.) the risks involved or b.) the EXPECTED FUTURE returns based on their entry point. I get it — stocks have been doing great and appear to be the only game in town and any investment with some risk management has under-performed. However, math, logic, and economic principals tell us this cannot continue forever.  Whether it is our Income programs (Tactical Bond, Income Allocator, or Tax Advantaged Bond), which are well positioned to take advantage of SHORT-TERM disconnects in the bond market or our Dynamic Programs (especially our unique Dynamic Asset Allocator) that add alpha by over or under-weighting key sectors based on the economic cycle, we are well positioned to handle this low growth environment that is looming on the horizon. [If you haven’t done so already, check out our presentation discussing how these portfolios work.]

Stocks have given up all the post-Fed meeting gains. 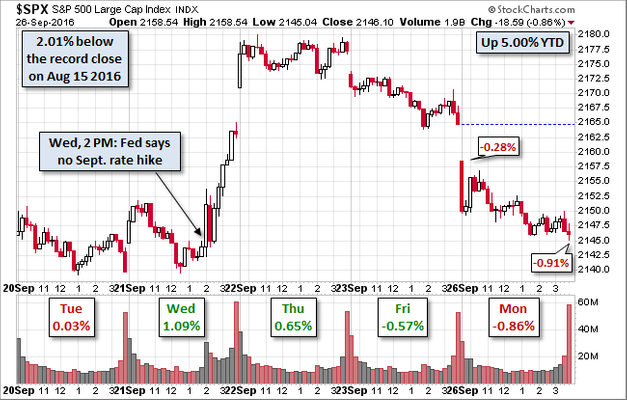 Following the first Presidential debate last night the futures market posted a strong rally after Hillary Clinton soundly defeated Donald Trump. Wall Street is overwhelmingly backing Mrs. Clinton in her bid for the Presidency, but the rally may be more the result of a sigh of relief.  Think of it as “the devil you know versus the devil nobody, including himself knows about.” Wall Street prefers certainty over uncertainty.

During the debate my phone was vibrating like crazy as friends, colleagues, and social media contacts were asking me my thoughts on the debate. For those of you that do not know, I’m a registered Independent, as I became equally frustrated with BOTH sides in their handling of the financial crisis is 2008. My comment was echoed by more than a few people — there was no winner last night, but there was a clear loser — The American people.

Hillary Clinton is trying to get elected by promising to legislate equality. She’s promising a lot of things and nobody seems to stop and ask how they will be financed. She spent her primary run against President Obama trying to convince people she is not a “Progressive” (the far left leaning party that believes it is their duty to legislate perfect equality) only to spend her entire primary this year convincing voters she is more Progressive than the Socialist Bernie Sanders.

Trump on the other-hand is the direct result of years of infighting inside the Republican Party.  When the Tea Party movement began inside the party, a direct result of the Republican led bailouts of the Wall Street banks in 2008 and continued favorable treatment in the years to follow, rather than addressing those truly conservative principals, the establishment inside the party did everything possible to eliminate any Tea Party candidates in the primaries. This led to those disenfranchised Republicans to support Trump as he showed once again last night he is clearly not a “normal” candidate.

This morning the initial rally in the futures market has faded as everyone is waking up to reality — neither candidate is offering anything that will fix our long-term problems, which means we could be in for more of the anemic economic growth that will continue to fuel the Social Uprising that is beginning to cause our country to unravel at the seams.

Deep down I’m still an optimist and believe we will get it right, but my takeaway from last night’s debate is simple — we have a lot of work to do America to get QUALIFIED candidates that actually offer SOLUTIONS.

I’ve been a bit long-winded the first two days of the week, so I’ll be brief this morning.  Despite the rebound in large cap stocks on Tuesday, the market action remains volatile and confusing.  Emerging markets did well, but US Small Caps did not.  Treasuries posted a stronger performance than high yields.  The market will likely remain volatile and on edge until it becomes clear who the next president is going to be — either due to a collapse in the polls or after the election.

Surprisingly, the market participants ignored another collapse in Deutsche Bank’s stock as the rumors persist the 11th largest bank in the world and 2nd largest in the EU will not survive without a government bailout. This despite 7 years of the ECB doing “whatever it takes” to prop up their financial system and stimulate their economy including buying non-AAA rated bonds from the EU’s banks. If the largest bank in Germany is struggling DESPITE the ECB’s unprecedented measures, how healthy can the rest of the EU banking system be?

In addition to the election & DB stock, we have a very full calendar of Fed speeches the rest of the week, including Janet Yellen heading back to Capital Hill to discuss banking regulation (another attempt by Congress to shut the barn door after the horses escaped or just election year posturing?). In addition to this appearance, there are 12 other Fed member speeches on the calendar through Friday.

In the face of a plethora of Fed speeches (and more scheduled today & tomorrow) stocks managed to rally into the close on Wednesday. Ironically the rally had nothing to do with the Fed, but rather an announced agreement by OPEC to cut production levels in December. This caused oil to rally 6% and brought stocks along with it (remember the current ‘company line’ on Wall Street is the earnings recession is the direct result of lower oil prices.) Whether or not the OPEC countries actually do what they agreed to is anybody’s guess. History tells us the chances are somewhere between slim and none this agreement lasts

I fully expect this to again be an issue in the months ahead.

Stocks continue their see-saw action as there is no shortage of worries for market participants to focus on. Yesterday’s sell-off was sparked by the on-going fears Deutsche Bank may need a bailout. This morning stocks are moving higher on unconfirmed rumors the ECB is arranging such a bailout. Confused? So am I. From a big picture perspective, this is what you get when you have high valuations & a stretched financial system that has done little to fix itself following the 2008 financial crisis. Both sides of Congress rallying together unanimously to burn Wells Fargo at the stake is not helping market sentiment either.

Turning back to Deutsche Bank, I’ve heard a few pundits describe the situation as a “potential Lehman moment”, where regulators have to decide if they are going to let a bank fail due to the illiquid, nearly worthless assets on their balance sheet. I find it hard to believe that is that severe, but their balance sheet could be deeply in the red depending on what derivative contracts they are on the wrong side of. The fear is the “cross-party” transactions they have. The problem with all these off-exchange derivative contracts is they are only as good as the other party. Like in 2008, if one bank is making the same bet over and over, a whole lot of other banks suddenly do not have a “hedge” or even a liquid position.

This concerns is starting to show up in the Euro Money Markets as shown in this chart from Bloomberg. 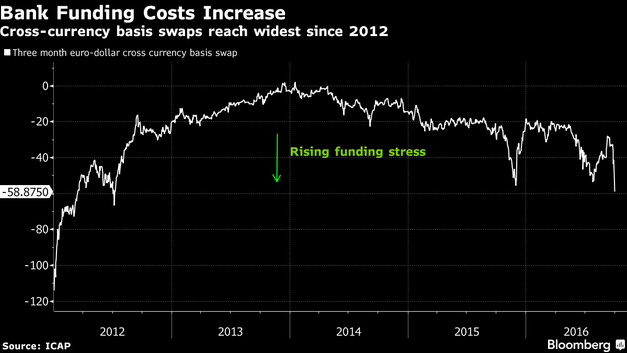 While things are not as bad as 2011 or 2008, they are near the worst levels since the scare last August (just before the ECB launched yet another round of QE.)

There is a lot to be worried about, making it dangerous to abandon any risk managed strategies in favor of investments that have higher recent returns.

Be sure to check our our Current Allocations page to see how our trading systems and programs are adapting to the market.

About Jeff Hybiak, CFA
New Kent, VA
Jeff joined SEM in October 1998. Outside of SEM, Jeff is part of the worship team at LifePointe Christian Church where he plays the keyboard and bass guitar. He also coaches a club soccer team.
Previous Post : In Fed We Trust? (part 2)   Next Post : The Productivity Conundrum