There are at least 15 candidates already lined up to compete for the 2020 Democratic Presidential nomination. The early entrants have either self-identified as Socialists or a lighter version of the economic strategy of taxing the “rich” at increasing rates to pay for new social programs for those “less fortunate.” Republicans have been blasting these candidates, citing the strength of the economic recovery as the proof their “trickle down” policies are working.

Before we go any further, let me say I am completely against Socialism. It’s never worked and it never will. What I think most people from both sides are missing is our country does need to see some structural changes or we will see the economic chasm widen even further. This week’s Chart of the Week highlights the change in Corporate Profits and Personal Income since 1980. I added lines to mark each President so we understand it is not the Republicans solely to blame for the increasing divide between corporate profit growth & lackluster personal income growth. 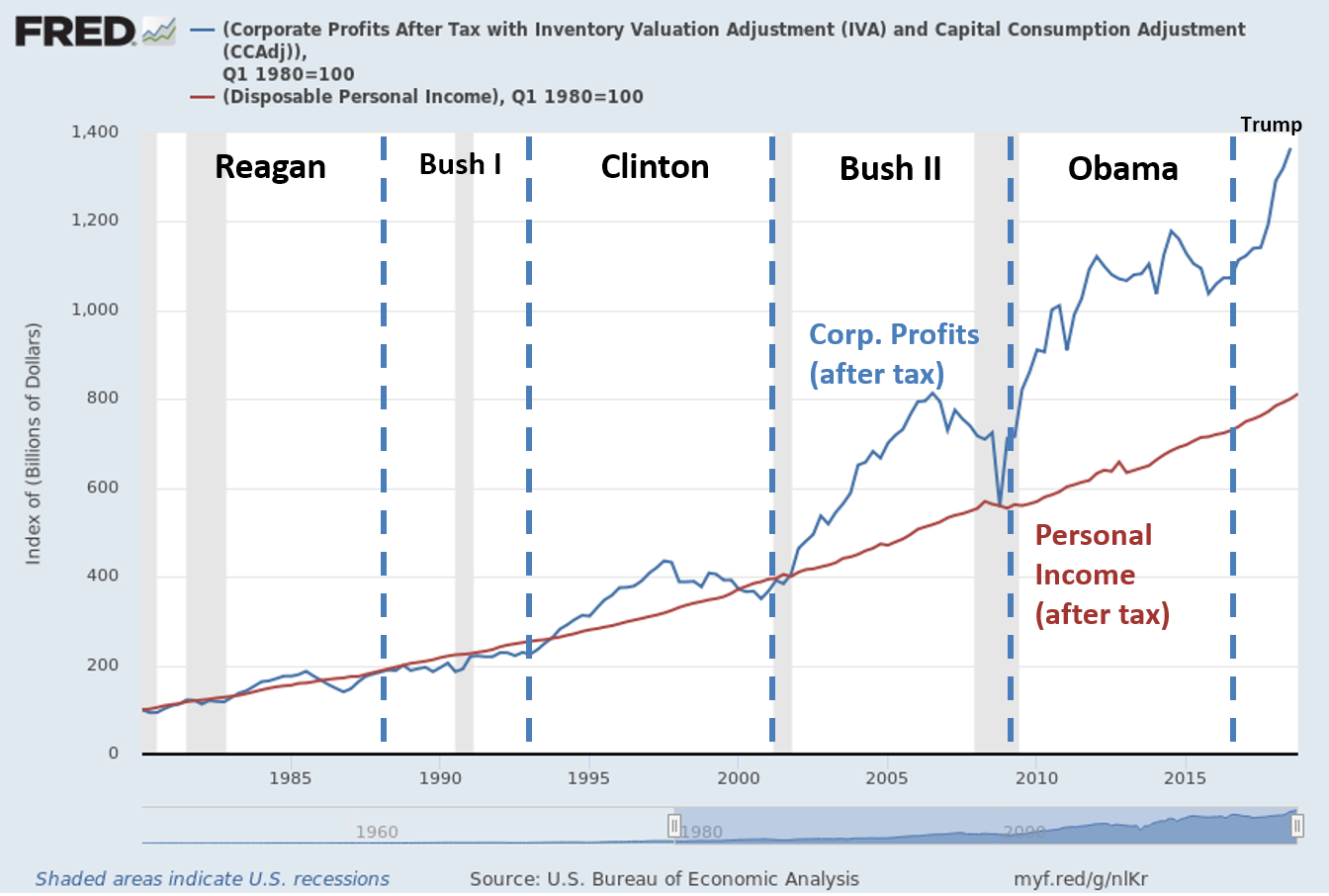 Both Presidents Clinton and Obama presided over an increasing divide where corporations convinced Congress, regulators, and the President a healthy corporate environment would lead to strong economic growth. Of course Presidents George W. Bush & Trump saw the divide grow even larger during their terms.

Again, I’m not in favor of Socialism, but I also understand economics and world history to understand something has to be done to help the citizens succeed. The current policies are certainly not doing that. The chart illustrates what I witnessed during my two stints in college. I started college in 1992, taking my first economics class. During this class the role of the corporation was defined as maximizing stakeholder value. Stakeholders were defined as shareholders, employees, suppliers, and the local community. After 3 semesters I began working at an accounting job where I thought I didn’t need college to pursue my career.

After realizing I was wrong, I returned to college in 1997. My second economics class defined the role of the corporation as maximizing shareholder value. For whatever reason, it was decided employees, suppliers, & the local community were not as important as the shareholders. Look at the chart again and notice how closely corporate profits tracked personal income during the Reagan and George H.W. Bush years. The gap began growing during Clinton’s tenure & other than crashing during the financial crisis, has continued to grow.

The reason most of the Democrats are trying to out liberal each other is because Americans are waking up to the lack of income growth at the same time government policies have favored corporations. If corporations would simply switch back to maximizing STAKEHOLDER value we wouldn’t see the Democrats lining up with their pitchforks trying to force them to do it. Obviously we wouldn’t see the impact immediately, but over time we’d have a much more stable economy.

[Another side note: At SEM we’ve always focused on stakeholder value and it has paid off nicely. I see most of the advisor firms we work with focusing on stakeholders as well. Small businesses seem to understand how important it is to take care of all stakeholders, not just the shareholders. It’s the large corporations who have been led astray the last 25 years.]

For ten years now I’ve been talking about the Social Cycle. The worst phase is the phase we are in right now — the crisis. During the first phase of the crisis we see a major catastrophe “solved” with unprecedented measures that actually make things worse beneath the surface (think about the Financial Crisis and the “solution” of bailing out all the banks that created the crisis, followed by 8 years of Quantitative Easing making the Wall Street banks even bigger and more profitable than they were to begin with.) During the last half we see the ‘disadvantaged’ rise up and tear down all the institutions they believe created the crisis.

The cycle lasts about 18-22 years. The last crisis was in the 1930s & 1940s (Great Depression & WWII). Prior to that was the 1860s & 1970s (Civil War), and before that the 1770s & 1780s (Revolutionary War). I’m not saying it has to get so bad that we see a major war, but economic imbalances often lead to military conflicts. The election of Donald Trump was the direct result of middle-class Republicans feeling so disenfranchised with the Republican establishment they rose up and elected an outsider. President Trump ran on a platform promising to help the middle class by going after China, illegal immigration, and the Wall Street banks. We shouldn’t be surprised to see the Democrats all lining up with promises to help the middle class.

Whatever the outcome, things could get ugly in the next few years and investors should be prepared. In the long-run I believe Americans will come together and find solid long-term solutions even if it means some short-term sacrifices. None of the solutions will be good for stocks (or bonds), so an active strategy designed to move money to the sidelines waiting for a better entry points is something most people should consider.