I’ve been struggling lately to get a feel for what the market participants are focusing on.  Sometimes it’s easy to see the theme, other times it’s not. 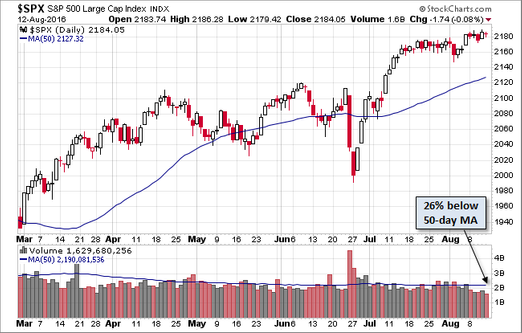 Over the weekend I went through every link on my links page (now called Nerd Links, thanks to my daughter Courtney’s recent overhaul of this site) trying to see if a “story” would develop.  As I browsed the sites it occurred to me why we’ve been stuck in this sideways, low volume trading range since mid-July (as illustrated from this chart from Advisor Perspectives) — everyone is afraid to commit. 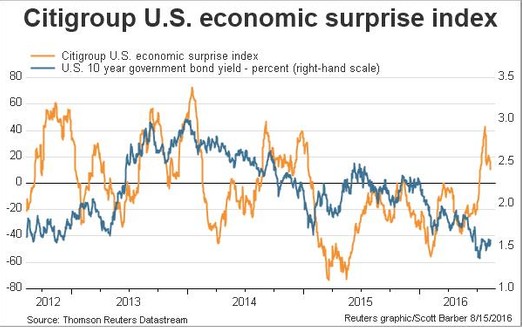 The economic data is actually been coming in stronger than expected better despite a disappointing read on 2nd Quarter GDP.  This should be leading to enthusiasm in the market (and an increase in bond yields), but that hasn’t been the case.  Our economic indicators still point to an economy that is growing around a 2.2-2.4% rate over the next 12 months (remember the “official” GDP is a single quarter compounded 4 times, not a true measure of how the economy has done over a one year period.)  The Fed’s GDP models (also available on our Links page under “Market Data”) point to an official number between 2.7-3.5% next quarter.  This should be good news for market participants that were worried about lackluster economic growth. 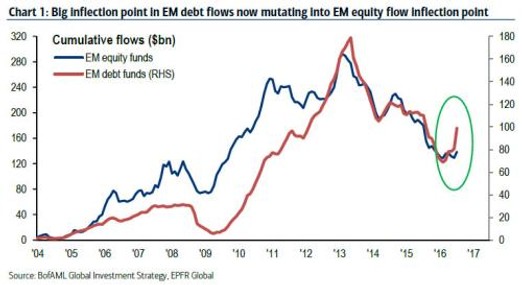 It’s not that we aren’t seeing a big jump in risk taking.  Small cap stocks have been hot, but not as hot as emerging market equities.  Last week we mentioned Bank America Merrill Lynch’s (BAML) concern about the asset flows looking like a “Final Melt-up“.  They are concerned about the sharp, sudden increase in asset flows into emerging markets being fueled by the global central banks’ drive to buy all kinds of debt (and in some cases equity) in a desperate attempt to boost economic growth.  After dumping risky assets like crazy most of the year (and thus missing most of the rally), BAML believes the rush back into stocks at all-time highs smells like the end of the bubble.  I guess time will tell. 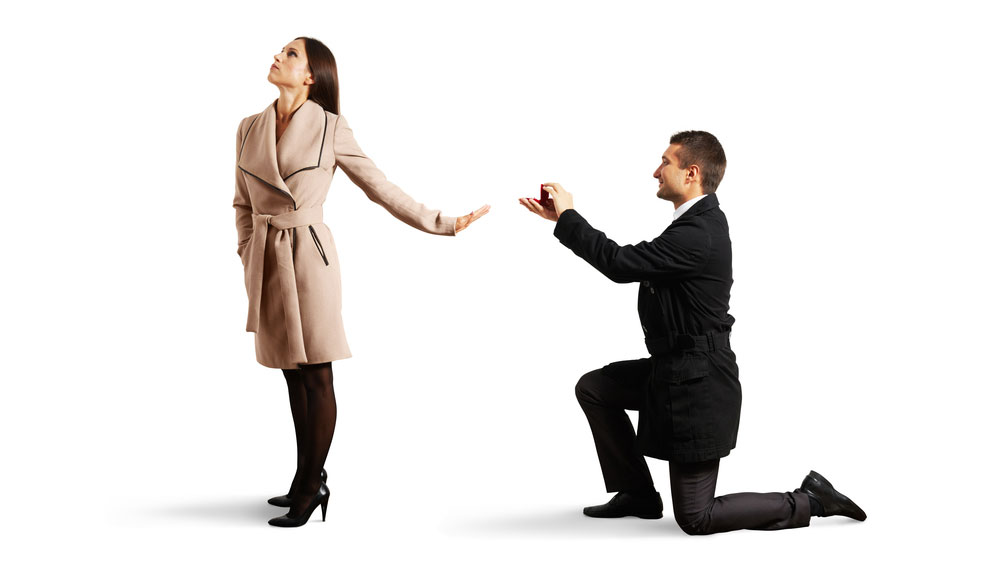 In my opinion, after reading through dozens of market outlook articles, talking to mutual fund managers, business owners, and individual clients the Fed is to blame.  Nobody wants to commit because they have no idea what the “data dependent” Fed will actually do.  If the economy grows “too quickly”, which would normally be good for investors and business owners, they are afraid the Fed will raise rates and put a fast end to the growth.  At the same time, people wonder how in the world the economy isn’t growing faster after all the stimulus the Fed & government has thrown at the market.  Even worse, the global central banks have had to resort to buying non-investment grade bonds and in some cases stocks and still have not seen much growth.  Investors with a longer-term perspective wonder what the end game is.

From our perspective we thankfully do not have to worry about that.  We are enjoying the ride in high yield bonds, emerging market bonds, and stocks in all of our programs.  This could continue for another 12-30 months before a recession emerges (yes despite what some believe recessions will still happen no matter what the Fed tries to do — often they will be the result of Fed ‘tinkering’).  Or this could end at any time.  Most of our risk exposure is in trend following type systems, so given the flat range we’ve seen for the last month, the reversal signal could come fairly quickly in our systems.

Stocks moved up a bit on Monday, but on very low volume and no real catalyst.  This morning they are looking to give back all of the gains from yesterday.  The key headline this morning is from an interview New York Fed President Bill Dudley gave where he said the markets are “underpricing” the chances of a Fed rate hike and followed by saying “we are edging closer” to a point where it would be “appropriate to raise rates.”  In other words no real commitment, just more confusion.

Even following a break-out, stock market participants cannot seem to commit.  The S&P 500 gave back all of Monday’s gains on Tuesday and is now back in the small, month long range it has been in for the past month.  That range began after the market final broke above an 18-month, 15% trading range that had been frustrating to all market participants — money managers, advisors, institutional & individual investors alike. 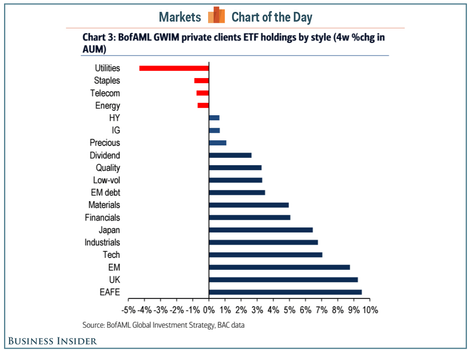 What is interesting is how we are seeing money flowing into risky assets (apparently the S&P 500 isn’t risky enough).  We mentioned on Monday how Bank America Merrill Lynch (BAML) is calling this a “melt-up”.  They define a melt-up as a rush of money out of safer assets and into riskier ones not because of fundamental improvements, but rather out of fear of “missing out.”  This chart from BAML shows the % change in assets over the past 4 weeks.

It seems so many people believe the Fed will not dare raise interest rates so they are pouring money into the riskiest assets (and abandoning more risk efficient investments like SEM’s programs).  BAML believes Fed Chair Janet Yellen’s speech at Jackson Hole later this month will put a lid on this melt-up.  For now, the market participants that are not on vacation this week will likely have a microscope out to analyze the Fed’s minutes due to be released during the trading day today.

When did the Fed become a 23 year-old man?  They can’t seem to commit to anything and only seem to care about the short-term impact of any decision.  It’s not that they don’t want to think about the long-term, they just aren’t quite sure if they are ready to grow up and think like an adult.  The release of the meeting minutes from the Fed’s July meeting confirmed this.

USA Today pointed out the use of the word “soon” in the summary of the meeting.  As in, the conditions in the market may soon warrant a rate increase.  (When do you think you’ll propose?  I don’t know……soon I guess.  That’s what people do right?)

WSJ described it better…..”The Federal Reserve may raise interest rates in September or they may not.”  (Why won’t you propose?  I don’t know……I want to leave my options open just in case.)

A WSJ article before the minutes were released used an even better word to describe the Fed……..Schizophrenic:

“We’re not just being caustic. Comments just this week from Fed officials have left long-time watchers completely vexed, unsure of what the central bank is really thinking or planning.If you listen to Fed officials this week, and it’s only Wednesday, the economy is either:

on a such a new path that the central bank needs to entirely scrap and “rethink” its policy outlook because economic reality is simply not in line with their expectations.

Nobody knows anymore which extreme, if either, actually represents Fed consensus.”

That term could also be used to describe most 23 year-old men.  Like the women (and parents) who love them, it is frustrating to see such schizophrenic, short-term, non-committal behavior.  Sooner or later everyone will say “enough” and when that happens it won’t be pretty. 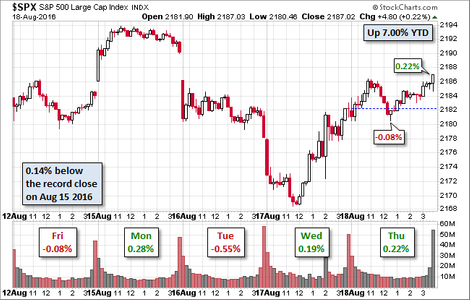 The waffling continues this week.  Stocks made small gains on Thursday on low volume.  This chart from Advisor Perspectives illustrates the back and forth battle among market participants.

The number of Fed members suggesting a rate increase is likely in the near future continues to increase.  Last night San Francisco Fed president John Williams joined his New York & Atlanta Fed president counterparts in calling for a rate hike.  He said given market conditions he’d like to see one “sooner rather than later.”

This indecision may continue into next week as the market awaits Janet Yellen’s speech at the Jackson Hole Symposium next Friday.

Check back next week for additional updates.

Be sure to check out our Allocations tab for a snapshot of where we are investing.

About Jeff Hybiak, CFA
New Kent, VA
Jeff joined SEM in October 1998. Outside of SEM, Jeff is part of the worship team at LifePointe Christian Church where he plays the keyboard and bass guitar. He also coaches a club soccer team.
Previous Post : Economic Update: 2nd Quarter 2016   Next Post : In Fed We Trust?