Tax Cuts Great for Stocks (in the short-term)

Apparently in Congress, your opinion on the deficit changes based on whether or not your party controls the White House. In 2011 Republicans were willing to die on the hill of fiscal responsibility when President Obama asked for a debt ceiling increase. Democrats argued we needed to spend the money to help stimulate the economy. Now we see the same Republicans forgetting about the ballooning Federal deficit, arguing we need to stimulate the economy via tax cuts. Those same Democrats who argued in favor of increasing the deficit in 2011 are now pointing to the increase in the Federal deficit.

Over the past year we’ve seen a wide range of projections about the impact tax cuts would have on GDP growth & our Federal deficit. Economists cannot seem to estimate next quarter’s GDP number with any accuracy using current policies and trends, but yet we are putting faith in their ability to estimate the impact of a change in tax policy over the next 10 years. Sadly, many of those estimates are not based on anything close to reality. Republicans continue to believe cutting taxes for corporations will lead to more jobs and spending. Corporations are already flush with cash, have been posting record profits, and have borrowed significantly at historically low interest rates. Are we to expect these corporations will finally begin to hire people in the US nine years into an economic recovery?

Let’s assume they do launch a massive hiring spree. Republicans are forgetting we have already thrown over $10 Trillion of excess spending at the economy since the recession ENDED. That does not include the $3 Trillion the Federal Reserve has added to the system over that time. Yet, this economic recovery has been the worst on record — averaging just 2.3% annual GDP growth. We haven’t even been able to hit the long-term average growth rate of 3.1%. (For more, see Will tax cuts create economic growth?) Some Republicans have argued their tax cuts will spur 3 to 4% GDP growth over the next 10 years. I’m not sure how that is possible, but even if they are able to hit numbers last seen in the 1990s, the federal deficit will still increase. 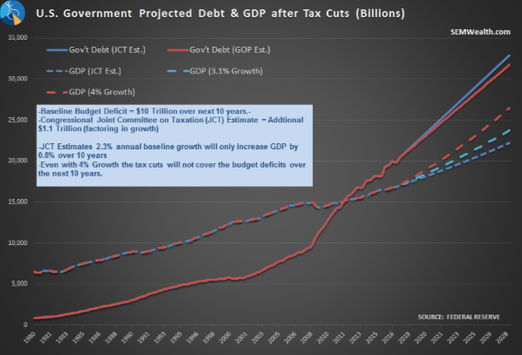 The Congressional Joint Committee on Taxation (JCT) tells us why the deficit will increase even with 3-4% GDP Growth — Social Security, Medicare, and Interest Expenses will continue to grow far faster than the economy will be able to keep up. Remember, beginning in the late 1970s, Congress began using the inflows from Social Security & Medicare to offset spending. Now instead of having money readily available to cover the increasing benefit payments to the Babyboom generation, the money has to come out of the CURRENT budget. With only 2 private employees for every 1 recipient, tax revenue will not come anywhere close to the amount of money the government needs to raise to make these “promises”.

Younger Americans are being fleeced once again. In order to get the tax cuts through under current laws, the individual tax cuts are not permanent. They will expire in 10 years. So not only will the Federal debt be $10 to $11 Trillion higher in 10 years, working Americans will be facing significant tax hikes. Before then, we are likely to see serious increases in the FICA tax to cover the unfunded liabilities in the Social Security & Medicare system.

What about those without money invested in the markets? What about those younger than 55? What about middle class Americans that will see both their income & FICA taxes raised significantly in 10 years? Once again Congress is showing they only care about the next election, not what is good for the future of our country. Until voters DEMAND representatives that actually look out for ALL Americans we will continue to see short-sighted bills like those in Congress right now.

About Jeff Hybiak, CFA
New Kent, VA
Jeff joined SEM in October 1998. Outside of SEM, Jeff is part of the worship team at LifePointe Christian Church where he plays the keyboard and bass guitar. He also coaches a club soccer team.
Previous Post : What would Buffett Do?   Next Post : How to Avoid Being &#39;Amazoned&#39;