Focus on the Positive

After stumbling for 8 weeks, market participants seem to be turning their focus on the positive news. Late last week President Trump announced intentions to release “significant” (yuuge) tax reforms this week. The market immediately shot higher, apparently forgetting the fact saying you are going to do something in Washington and actually doing it are two completely different things. Over the weekend, fears of the cratering of the EU were relieved somewhat when ultra-far-right candidate Marine Le Pen fell to second in the first round of France’s election. The second round is scheduled for May 7.

Despite being given the nickname “Mr. Sunshine”, I’m all for focusing on the positive in life. When it comes to investing, however we need to focus on ALL the data. I’m not saying all the data is bad — it really depends on your time horizon, risk tolerance (both willingness and ability), and overall objectives. The weakness the past few months was a good opportunity for those with a very long time horizon to put money to work. Now as we shift into a mode where investors are probably getting a little too optimistic, it could be a good time to shift OUT of investments that are too risky for their portfolio. The market moves in cycles. Enjoy the positive focus, but do not get emotionally attached to it.

Since we are focusing on the positive this week and I spent a great deal of time last week talking about the danger of current valuation levels, I wanted to bring up something that could  justify higher valuations — strong economic growth. This chart of my economic prediction model shows the acceleration in GDP growth potential since the election. 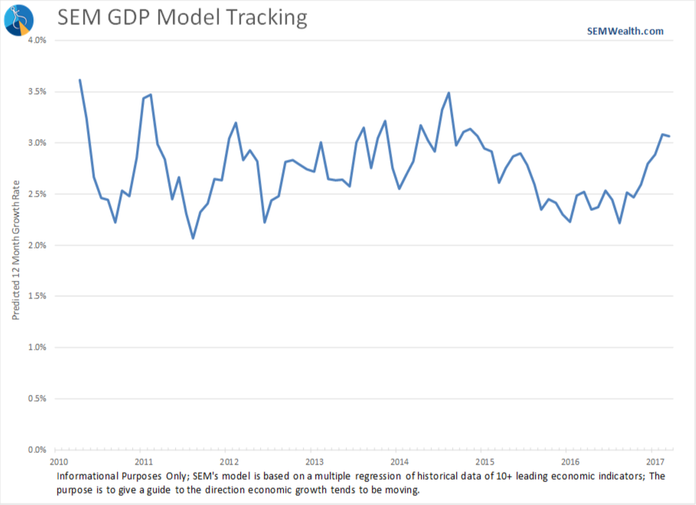 If (and I think this is a big if) we start to see the “soft” data that tends to lead this model turn into strong spending (“hard” data), then earnings would go up, which would then lead to lower P/Es (so long as prices did not go up faster than earnings.)

The uncertainty behind any of President Trump’s policies creates a big * on this forecast. So far the market has shrugged at his tariff on Canadian lumber, but more actions like this could hurt the US if it devolves into a trade war with other large countries. I’d be careful reading too much into the short-term reaction of the market. This is something we need to watch closely.

The market shrugged after getting a glimpse of the “bad” Trump policies that could create some serious long-term issues (tariffs that tick off major trade partners.) I’m not saying something doesn’t need to be done to make “fair trade” actually fair to the US, but a trade war could create significant bumps in the road for an economy that is still very fragile.

Today we are expected to hear a “good” Trump idea — tax cuts (reform?) that will likely ignite a feverish renewal for those that have been buying stocks since he won the election last November. Whatever the idea that he releases today, like health care reform an idea is one thing; an actual change in policy is another. It will probably be the “biggest”, “greatest”, “most significant” change in tax policy our country has ever seen — at least according to the announcement I’m sure — it will probably be “yuuge” as well. From what I’ve seen the market will focus more on the idea than the implementation of it for the short-term.

The other thing I’ve seen the enthusiasts lose focus on is the impact his tax plan will have on the country. We continue to hear people compare his economic policies to President Reagan’s. This has led them to jump to the conclusion the economic growth rates will be similar and thus the stock market returns. However, we have to remember this is a vastly different economic environment than we saw when Reagan took office. The tax rates alone show how different things are now versus then. 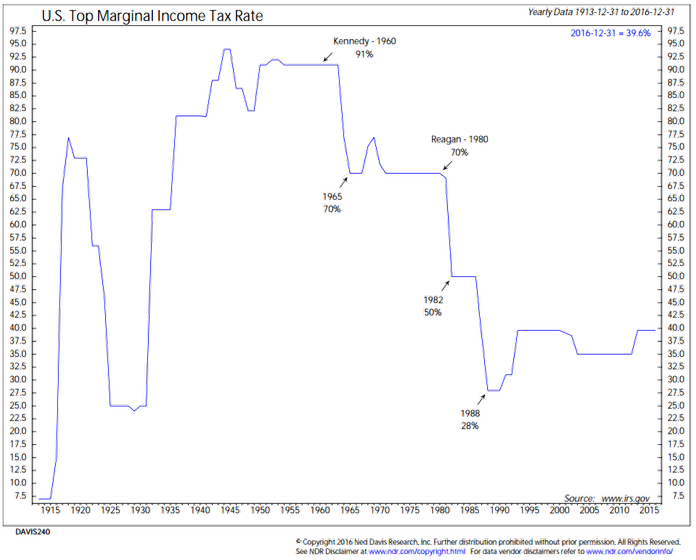 When you analyze the plan released today (or anything coming from Washington), please be careful to not let your representativeness bias cloud your judgement.

“Huh?” This was a summary of the reaction by the market participants when the much awaited tax plan was released by the Trump administration. Earlier in the day stocks had gotten a boost when the Freedom Caucus (the remnants of the Tea Party) announced they would support the revised health care reform legislation. It was thought this was a sign they might also support the soon to be released tax cuts everyone has been pricing in since the day after the election.

My initial take was the same as the market’s. I was going to spend some time trying to figure it out and offer my summary here, but fifteen minutes in I decided it would be a waste of time. Even the White House said this is a “road map” that is “subject to changes”. I think this list of headlines from RealClearMarkets.com summarizes how little we learned yesterday and how many opinions there are about HOW taxes should be cut.

The market continues to trade on the IDEA of some pro-growth government policies, but the problem is nobody really knows how to implement these ideas or even get them into coherent legislation that will be passed by Congress. When the market starts focusing on the actual implementation is any body’s guess, but when it does you best be ready.

About Jeff Hybiak, CFA
New Kent, VA
Jeff joined SEM in October 1998. Outside of SEM, Jeff is part of the worship team at LifePointe Christian Church where he plays the keyboard and bass guitar. He also coaches a club soccer team.
Previous Post : About that &quot;weak&quot; GDP   Next Post : Some Perspective on Bonds