It&#39;s all about perspective

Stocks are at all-time highs despite the non-stop assault on President Trump in the media. For the past few months I’ve been discussing behavioral biases and how they can cause us to sometimes make bad decisions. Since the election (you know the one where all the “experts” said a Trump victory would cause a market crash) investors/speculators have been positioning their portfolios for runaway growth. Over the same time the media has tried to tell everyone why they were right and warning that the worst is still to come.

As I’ve said all along, it all will depend on how many “good” policies are pushed through to offset the “bad” policies he pushes through.  Over the weekend I saw an interesting chart on A Dash of Insight. It really sums up the wide-ranging perspectives on what lies ahead. 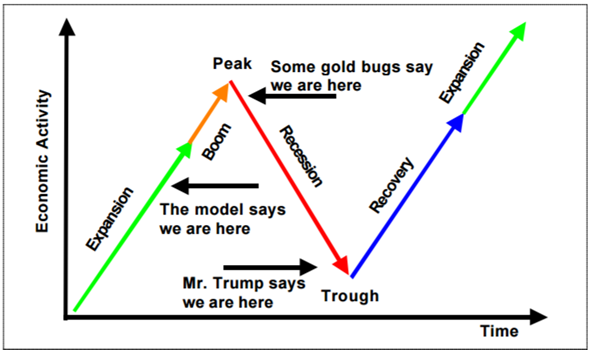 Subjectively positioning a portfolio at this point is literally guess work. My models also say we are still expanding & could see a big boom. Our Dynamic Portfolios, which are based on the economic models are positioned accordingly. Our tactical programs, which focus on trends are also heavily invested. However, the major risk in my economic models is something could easily come along and throw us into a major shock. The tactical models would likely retreat back to lower risk assets rather quickly. Even looking at the Dynamic models, if the “shock” is big, those models too could be in a more defensive mode.

That’s the beauty of how we manage money at SEM — no guesswork, no opinions, just a focus on the data.

As the march into all-time high territory continues, Goldman Sachs is warning that investors have reached “maximum optimism”.  They are warning that a “day of reckoning” will emerge for investors as they realize tax reforms and many of the reasons they have been buying stocks is a long way off and may not be as large as expected.

This chart from Ned Davis Research is one of many “sentiment” charts that shows how big the “animal spirits” have gotten since the election. 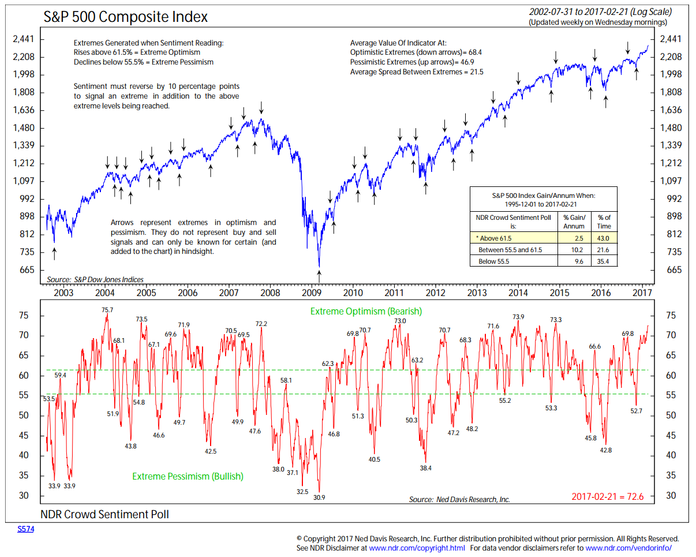 Of course the problem is extreme sentiment readings are not sell signals by themselves. This rally could continue for quite some time — until some “surprise” event hits that causes the sentiment to reverse. When that happens is anybody’s guess, which is why our tactical strategies are so heavily focused on the uptrend, which remains intact.

Will the market ever go down? That is the thought going through most market participants’ minds right now. Logically I think we all understand it will go down. We can all imagine scenarios that can cause it to go down even though often times the thing that causes a rally to end and a large sell-off to begin is unexplainable in the early days. Sure in hindsight our brains will explain why it goes down and then trick us into believing we should have saw it coming all along. This then causes us to stay far too long in a rally (investors in general, not SEM).

We know the market will go down at some point, but we have convinced ourselves (again investors in general, not SEM) that we will see the sell-off coming and be able to get out in time.  Josh Brown at the Reformed Broker picked up on this thought and carried it further.

But this is an abstract concept [Idea of the market rally reversing]. People are willing to entertain the thought of it in their minds for a few moments, but then the market makes a new high for the 3rd, 4th, 5th, 6th day in a row and the only thought that gets through is “why aren’t I making more?”

This goes doubly for professionals, who are judged in environments like these not based on whether or not they caught the move – but based on how much of it they caught for their shareholders or clients. “Yes, we’re up, but you left money on the table” go the phone calls and emails.

During market rallies like this our brains play tricks on us. We look at things that are not going up as much as the market and entertain the thought of dumping those holdings (or managers) and only holding onto the things that are rallying. Nearly every behavioral bias comes into play at this point which makes this a very dangerous point in the market cycle.

Our models and investment programs are all nearly fully invested as much as it would allow, but that is still causing some clients and advisors to call into question why they would hold on to anything not making as much or more than the market. The reason of course is markets often go down as quickly as they go down — often without any explainable reason.

About Jeff Hybiak, CFA
New Kent, VA
Jeff joined SEM in October 1998. Outside of SEM, Jeff is part of the worship team at LifePointe Community Church where he plays the keyboard and bass guitar. He also leads a small group Bible study.
Previous Post : Why are people so upset?   Next Post : $20 Trillion+