We continue to see a market that is afraid of commitment.  A growing number of institutional investors are openly questioning the Fed’s ability to stimulate the economy.  The Fed’s inability to forecast the last crisis, even after it had already started has led some to fear another forest fire.

Last week we saw two formerly “dovish” (focus more on economic growth than inflation) Fed members (Williams of San Francisco & Dudley of New York) suggest a Fed rate hike could come “sooner rather than later.”  This morning the markets are greeted with comments from Fed Vice Chairman Stanley Fischer mentioning the Fed is close to its targets; hinting a rate hike may be the next step for the Fed.  Former Federal Reserve Chairman Alan Greenspan added his two cents saying interest rates will soon have to increase and indicated they may have to rise rapidly to fight pent up inflation pressures.

This will all put a heavy focus on Fed Chair Janet Yellen’s speech on Friday at the Jackson Hole Symposium for Monetary Policy.  These speeches are often highly anticipated but tend to be more theoretical than practical.  They can set the tone for a new direction from the Fed (Bernanke’s 2010 introduction of Quantitative Easing comes to mind).  We also know Chair Yellen is highly sensitive to the financial markets and likes to “test the waters” by throwing ideas out there and seeing how the market might react.  With valuations at levels only experienced in past bubbles and the markets back near all-time highs Dr. Yellen may want to see how markets would handle the thought of one or two rate hikes.

One thing I’ve mentioned since 2008 as the Fed and now other central banks began using “unprecedented measures” to fight the financial crisis is the unwinding of those measures is unprecedented.  This means the Fed has no road map on a.) how to unwind them and return to ‘normal’ and b.) how the markets might react.  As the sign above says, “good luck”.

The market continues its see-saw action, uncertain of what the NEXT big move might be.  Last week we mentioned BAML’s assessment of the market based on their interpretation of asset flows — that we are entering a “final melt-up” as previously pessimistic investors who sat out the entire 2016 rally are now pouring money into the riskiest asset classes.  I’ve also read several articles over the past week that discussed the biggest risk investors have right now is missing out on the melt-up.

This is indeed a risk.  Remember, one of the reasons I decided to launch our Dynamic Aggressive Growth (DAG) program now rather than in the depths of the next bear market, is I can see a scenario where we see a continuation of the bull market for another 12-30 months.  The worst bear markets tend to occur during a recession or some other type of shock.  The worrisome thing to me is seeing so many people EXPECTING another strong bull move.

Given the overwhelmingly bullish sentiment and the growing swell of clients and advisors leaving SEM and other risk managed investments for “lower fee, higher recent return” investments, I think it is important to ask “what could go wrong”.  Briefing.com, which is an aggregation service of the broad range of research reports from the large institutions, put together a list of what could spark a large market sell-off. Here’s their list with a few comments from me:

There is very little, if anything the Fed could do to PREVENT any of the above from happening, although they can make most of them happen if they are not careful.  This creates significant risk for investors just now shifting their risk profile in pursuit of higher returns (or lower fees).  If any of the above happens, investors will be happy to pay somebody with experience and a PLAN to migrate what is certain to be a highly volatile, somewhat scary market environment.

Unlike the Fed, we do have a roadmap.  We’ve been here before and will be ready to implement our defensive measures again when they are needed.

It has now been 32 straight days without a 1% move in either direction by the S&P 500.  Early last summer we worried about the increase in 1% moves as it usually precedes some even bigger trend changes for the market.  Those moves turned into sharp corrections in August, again in the fall, and again to start 2016.  So does that mean the opposite is true given the nearly unprecedented calm in the market? 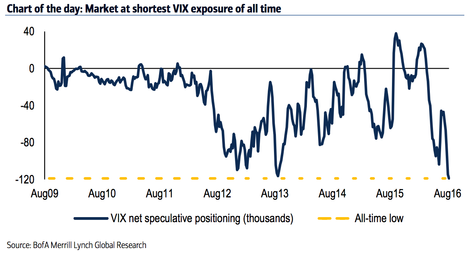 Unfortunately the calm may be creating even bigger risks than we saw last summer.  Bank America Merrill Lynch (BAML) was out with a note yesterday mentioning the risks being created by this low volatility environment.  In the desperate stretch for yield, institutional investors are now selling volatility (puts on the VIX) with the assumption the central banks will continue their stimulus push and the markets will remain relatively calm.

With so many people betting for even lower volatility a sudden shift in risk attitudes could lead to a spike in volatility, causing all those betting against an increase in risk to cover their positions.  A spike in the VIX makes it more expensive to insure long positions, which then often leads to lower market prices as institutions decide to reduce their exposure by selling their core positions.

It seems everyone is cautiously awaiting to hear what Fed Chair Janet Yellen has to say on Friday.  Whatever it is, my experience tells me in the big scheme of things this will likely be a forgotten event.  The Fed is literally making it up as they go along.

This reminds me a bit of Game of Thrones.  Please don’t spoil it for me as Brandi and I are very late joining this cult-favorite series.  I’ve read book 1 and we are on season 4, but what I’ve been told is the HBO series pretty much followed the story line of the books…….until this last season when the TV series passed the books.  Now the writers of the TV show are left making up where they thing the author of the books is going.  This leaves even those super-fans that read all the books shocked, surprised, and wondering what may happen next. 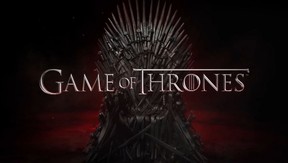 There are a lot of other parallels that can be drawn between Game of Thrones and the market, but having been in the group of Americans that hadn’t watched this series until recently, I know how it feels to have no idea what others are talking about.  Even those unfamiliar with the series can see the internal power struggle that is going on inside the “kingdoms”.  Those struggling to gain control and believing they can keep it have spent so much time focusing on their own kingdom, they cannot see the growing threat “beyond the wall” that can completely destroy all the kingdoms.

We can thank Ben Bernanke for a lot of things (not all of them good).  One of those things is the focus on this week’s Kansas City Fed Monetary Policy Symposium and the speech at 10 am ET from Fed Chair Janet Yellen.  Back in 2010, it was at this symposium Dr. Bernanke essentially announced the idea of an expanded Quantitative Easing program.  He followed in later years with speeches that discussed “new” ideas such as “Operation Twist” and “Open Ended” QE.  Last year Chair Yellen skipped the symposium.  The market participants are cautiously waiting to see what she may have to say about any “new” policies they are considering.

Regardless of what she says, we have to keep in mind they are making it up as they go along.  Despite a lifetime of studying the causes of the Japanese Depression and the problems with their monetary solutions, Ben Bernanke completely missed seeing our own financial collapse.  Making matters worse, the Fed has constantly been wrong about the direction of the economy, inflation, and the impact of their monetary policies during this entire 7 year economic “recovery”.

People are beginning to notice and that is not a good thing given how much the Fed has propped up the market.  Yesterday I was surprised to see an article in the Wall Street Journal titled, “The Great Unraveling:  How Years of Fed Missteps Fueled Disillusion with the Economy & Washington.  The Fed has gone from one of the highest ranked Federal agencies to now being ranked below the IRS in terms of public opinion of the job they are doing. 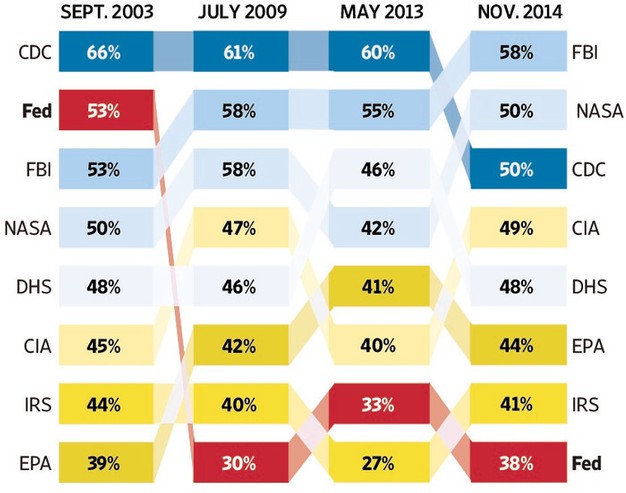 The entire article is well worth the read, especially when you consider it is written by the “Fed Whisperer” Jon Hilsenrath, who earned his nickname as the reporter with the most inside access to the Fed.

The entire piece is well worth the read as it includes a surprisingly honest assessment of the Fed from its own members.  Here’s one example:

“There are a lot of things that we thought we knew that haven’t turned out quite as we expected,” said Eric Rosengren, president of the Federal Reserve Bank of Boston. “The economy and financial markets are not as stable as we previously assumed.”

A lot of the concepts discussed are included in our “Most Popular” articles including the concept of “Potential GDP” and even the “Social Uprising“.  Keep this article in mind no matter what Chair Yellen has to say today.

Check back next week as we expand on this discussion……

Be sure to check out our Allocations page for our current exposure and how our various trading systems are positioned.

About Jeff Hybiak, CFA
New Kent, VA
Jeff joined SEM in October 1998. Outside of SEM, Jeff is part of the worship team at LifePointe Christian Church where he plays the keyboard and bass guitar. He also coaches a club soccer team.
Previous Post : Can the Fed Control Interest Rates?   Next Post : Below Average or New Normal?