85% of Wall Street Banks expect the S&P 500 to end higher in 2018. The S&P 500 was up every month in 2017 (first time ever). It has been up 14 consecutive months (also the first time ever). It has not had a 3% correction in 302 days (again a record). In less than 2 weeks the S&P 500 will likely set a record for the longest streak without a 5% correction. Market participants have gotten used to the market always going up. I would not be known as Mr. Sunshine if I didn’t point out the danger in being lulled into complacency simply because the market has not gone down even a small amount in over a year. We haven’t experienced a bear market in nearly a decade.

We were at a similar point about 10 years ago when the first cracks began appearing in what nearly everyone thought was an indestructible foundation of growth. In 18 months we saw tens of trillions of dollars of paper wealth evaporate. The S&P 500 lost over 50% of its value as did homes in many parts of the country. When dealing with our money, it is important to remove as many behavioral biases as possible. One of the most important ways to do this is to take a bigger picture approach to our net worth and looking at it from a very long time horizon.

As humans we see a value on an investment statement (or on Zillow) and we immediately remember that value in our brains. As markets go up, the thrill of seeing those values rising is addicting. There have been numerous studies about the chemical reactions our brains feel when we experience these paper gains in value. Conversely, there are serious negative, chemical reactions when we see those values declining. Greed & Fear, Fear & Greed. That is what has moved markets since the beginning of time. It might FEEL different this time, but with humans involved it is never different. (For more, see Behavioral Finance 101)

One of the best ways to overcome our emotional reactions is to always use data. Looking back through time we can see the cycles of greed & fear and the subsequent results for those who fell into their emotional trap. Readers of this blog are no stranger to the correlation between valuations and long-term investment results. Most recently I took a look at the “Buffett Indicator” (see What would Buffett Do?) I like the Buffett indicator because it removes subjective measurements that can fluctuate greatly and focuses on economic fundamentals and logic (the total value of the market cannot exceed the total output of the underlying economy for long periods of time — it always reverts back (and usually below) the mean.)

Recently I read an article from Dr. John Hussman that really played to my nerdy, accounting roots. Dr. Hussman walked through in great detail how the price of securities in the public market does not equal true economic wealth. Here is a summary of the logic:

2) For every investor who calls some security an “asset” there’s an issuer that calls that same security a “liability”;

3) The net acquisition of all securities in the economy is always precisely zero, even though the gross issuance of securities can be many times the amount of underlying saving;

4) When one nets out all the assets and liabilities in the economy, the only thing that is left – the true basis of a society’s net worth – is the stock of real investment that it has accumulated as a result of prior saving, and its unused endowment of resources. Everything else cancels out because every security represents an asset of the holder and a liability of the issuer. Securities are not net wealth.

Conceptualizing the “stock of real investment” as broadly as possible, the wealth of a nation consists of its stock of real private investment (e.g. housing, capital goods, factories), real public investment (e.g. infrastructure), intangible intellectual capital (e.g. education, knowledge, inventions, organizations, and systems), and its endowment of basic resources such as land, energy, and water. In an open economy, one would include the net claims on foreigners (negative, in the U.S. case). A nation that expands and defends its stock of real, productive investment is a nation that has the capacity to generate a higher long-term stream of value-added production, and to sustain a higher long-term standard of living.

Understand that securities are not net economic wealth. They are a claim of one party in the economy – by virtue of past saving – on the future output produced by others. When paper “wealth” becomes extremely elevated or depressed relative to the value-added produced by an economy, it’s the paper “wealth” that adjusts to eliminate the gap.

Using that logic, Dr. Hussman plotted the ratio of total market capitalization to “Gross Value Added (GVA)”. In the long run, the market is only worth what the companies inside the market actually produce. Just like the Buffett Indicator, the longer the market is above the GVA the further it has to fall to hit the mean. Dr. Hussman’s chart showing the Market Cap to GVA ratio (on an inverted scale) to the subsequent 12 year returns tells the same story as all the other valuation indicators I’ve looked at — investors should EXPECT NEGATIVE RETURNS over the next 10-12 years. 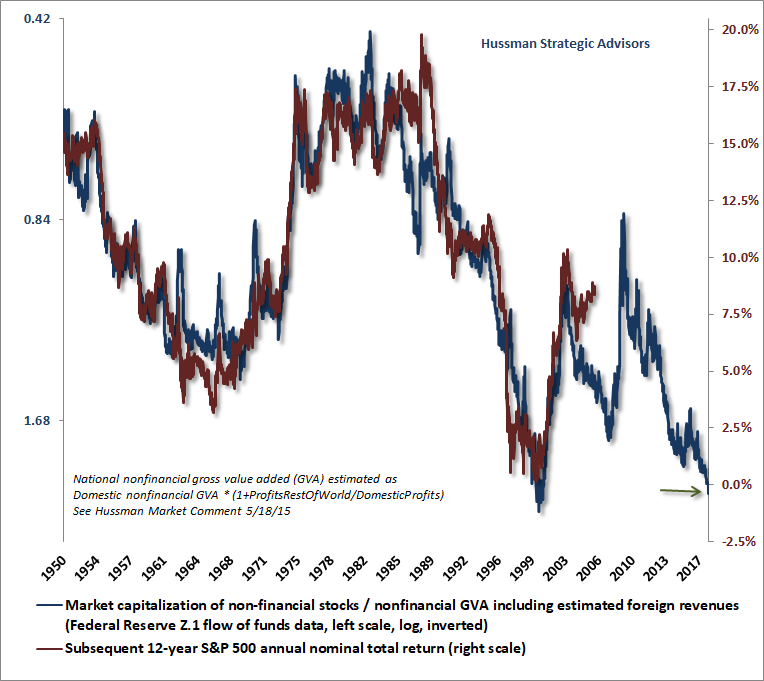 In 1999 with hindsight we all know how stupid it was for all these ‘.com’ companies having astronomical values. While there isn’t a single case (other than bitcoin) where we can clearly point to the same idiocy, what is more concerning is the TOTAL market is so far above what the companies inside the market are adding to the actual economy. We have the Fed and their unprecedented policies to prop up the markets to blame.

Now that we are entering the phase where the Fed is not only raising interest rates, but finally pulling out some of the money they created under the various QE programs we could be much closer to seeing the inevitable correction in market prices to better represent what the companies are actually producing.

As I have said any time I mention valuation indicators — they are terrible short-term timing indicators. They are, however valuable in setting expectations, especially for those sitting in a buy & hold portfolio. Over the past few months we’ve looked at a few dozen accounts managed by big name Wall Street banks. In all of them, these investors who were over 60 years old, retired (or partially retired) has SIGNIFICANT levels of risk. For those people valuations do matter because they will be taking money out of the accounts and do not have time on their side like a 30 year old investor does.

I thought this quote from Dr. Hussman’s article was especially relevant given SEM’s Behavioral Approach to Investing.

“Faced with extreme valuations, the first impulse of investors should not be to try to justify those valuation extremes, but to recognize the impact of their own speculative behavior in producing and sustaining those extremes. It then becomes essential to monitor market conditions for the hostile combination of extreme valuations and deteriorating market internals.”

If you are concerned with valuations & would like to have SEM do a free portfolio review, please contact me.

About Jeff Hybiak, CFA
New Kent, VA
Jeff joined SEM in October 1998. Outside of SEM, Jeff is part of the worship team at LifePointe Christian Church where he plays the keyboard and bass guitar. He also coaches a club soccer team.
Previous Post : Bending the curve   Next Post : 4th Quarter 2017 - Winter Newsletter