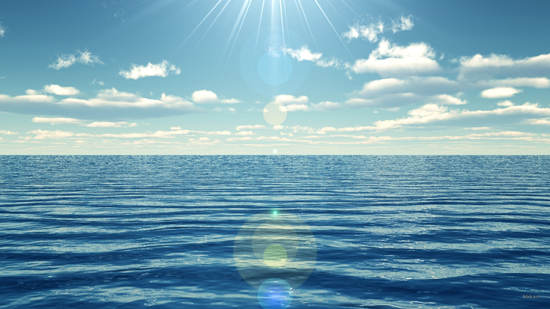 Like we warned in May when the “sell in May” advice was going around, making investment decisions solely based on the calendar can be detrimental to your success.  Those that did move to the sidelines in May missed a volatile start and end to the summer as well as a record low volatility streak in the middle.

Despite a surprising “Brexit” vote, a divisive primary election, an even more divisive presidential campaign, widespread violence in protest of officer involved shootings, a schizophrenic Federal Reserve, disappointing corporate earnings, and a sharp slowdown in economic growth, those selling in May missed a 4.1% gain in the S&P 500 index.  Now as we turn the calendar to the best part of the year historically, investors are hoping to add to those gains. 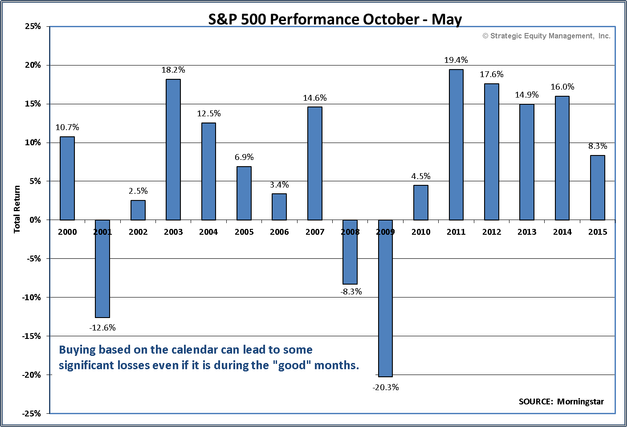 The Fed is likely on hold until after the election, Wall Street’s favorite candidate Hillary Clinton is beginning to extend her lead in the polls, corporate earnings are expected to improve along with economic growth, and the rest of the global central banks continue to hint at more ways to stimulate their financial system. This could be a great quarter.

Of course, I wouldn’t have earned the nickname “Mr. Sunshine” if I failed to point out that it is often when most people expect smooth sailing that we see bigger losses in the market. Just as easily as all the “bearish” items last quarter disappeared, all the “bullish” items listed in the preceding paragraph could be reversed or replaced with more significant concerns.

Whatever happens this quarter we are positioned nicely to handle it. Our “tactical” programs from Income Allocator and Tactical Bond to Enhanced Portfolio & Enhanced Growth are heavily invested right now, but are also close to seeing some sell signals emerge if needed. Our Dynamic programs are more neutral, but still providing exposure to the markets given their higher “normal” allocation. From both a logical and psychological perspective, a blend of our Tactical & Dynamic programs offers clients the opportunity to participate in an on-going bull market while still having some portion of their money that can be moved to the sidelines if problems develop (Click here to learn more about our Dynamic Portfolios.).

Investing is never as easy as it seems and I tend to be more worried when it looks like we have smooth sailing ahead.  You would be wise to do the same.

Monday’s performance was not the smooth ride most investors were hoping for, but some late day buying cut the losses nearly in half. The focus on the day was the ISM Manufacturing surveys which showed the big drop in manufacturing in August was likely just a temporary bump in the road. However, the internal indicators did not improve as much as anybody hoping fundamental economic growth will lead to higher stock prices. 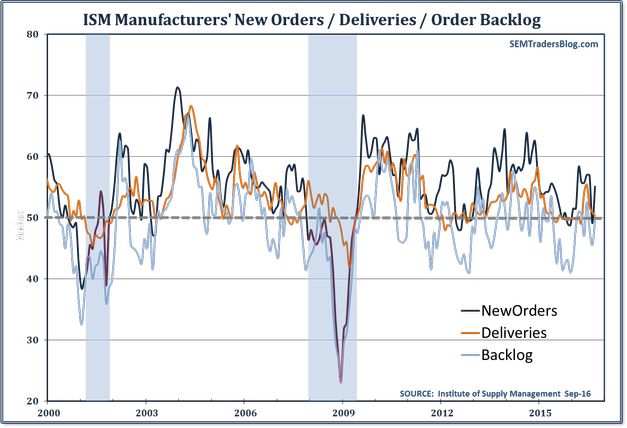 The takeaway from yesterday’s data is the economy probably isn’t strong enough to lead to a Fed rate hike in December, but it is also not strong enough to close your eyes and buy risky assets. Today there is little in the way of economic data, but we do have a couple of Fed speeches that could move the markets.

The markets continue to be on edge as concerns over Brexit, a possible ECB tapering of their QE program, and the prospect of a Fed rate hike in December are moving the currency and bond markets.

On Tuesday, the financial media tried to blame some “hawkish” (in favor of rate hikes to fight possible inflation) comments from some Fed members for the sell-off in stocks. However, watching the markets all day what I saw was a Bloomberg report discussing a “consensus building inside the ECB” in favor of tapering their QE purchases before it is set to expire in March of next year sparked a sell-off in both stocks and bonds.

When you add this concern with the angst of currency & bond traders over Brexit following the announcement by the UK Prime Minister on their planned date of evoking “Article 50” (which starts a hard 2 year time table to exit the EU) the appetite for any sort of risk taking quickly diminishes. Most experts had thought the UK would hold the “Article 50” card as long as possible to help with negotiations and now fear some hard-line negotiating from the rest of the EU.

On top of all that we do have concern over the Fed and a possible rate hike before year end. The Bloomberg Rate Hike Odds have climbed significantly just in the past few days. 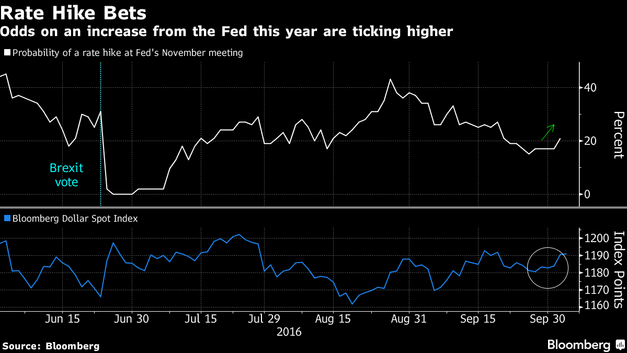 As we’ve seen far too often the past 7 years, these “reports” may simply be the ECB & Fed’s way of “testing” the market reaction to an idea. Last Friday’s “Chart of the Week” showed the pathetic track record of the Fed in predicting the direction of interest rates. It’s even more pathetic when you realize they are the ones setting those interest rates.

2016 has been the year where you can throw out the textbooks. Things you think should help the market hurt and things that should hurt the market spark rallies. The start to the final and what should be the most bullish quarter of the year has been off to a rocky start. Yesterday’s rally was sparked by a weaker than expected ADP employment report.  The 5-day chart from Advisor Perspectives is always a good place to start when looking at the recent action. 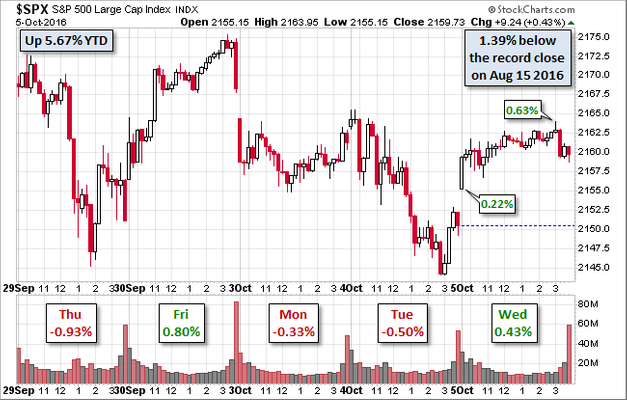 It’s hard to determine what the market wants to see from the economy. The initial reaction to the “weaker than expected” September Payrolls report was a sharp rally. The enthusiasm of the “bad” data was quickly diminished and the futures market is now showing a flat opening as I write. It is still higher than before the report was released.

The report was a pretty solid one. The year over year growth rate held steady at 1.7%, essentially where it has been for the past 5 months.  The 3 month and 12 month average monthly change is a solid 192K & 204K respectively. 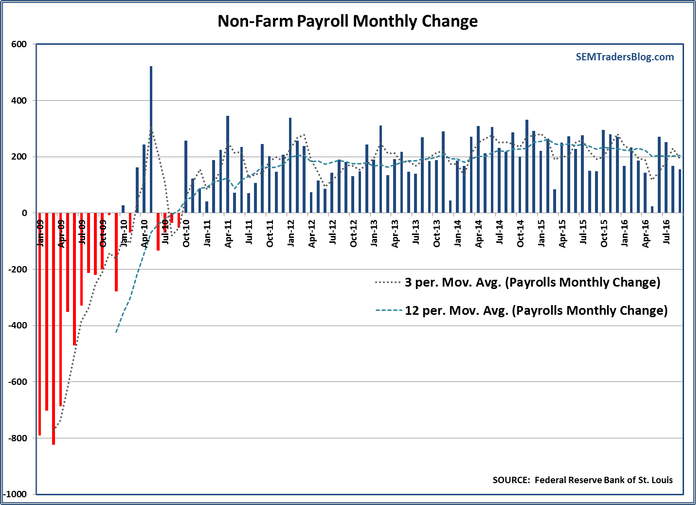 The current pace of jobs gains is indicative of an economy growing at a 3.2% annual pace. That by itself should be enough to cause the Fed to raise rates. Wages were again up 2.3%, above their 2% inflation target. Today’s report matches some very solid economic reports this week — all from September. Here are the indications from the September reports for annual GDP growth:

This brings my economic model up to a 2.3% – 2.7% annualized growth rate over the next 12 months, which is the highest reading since April & July. If the rest of the September data is as solid as the preliminary reports it will be hard for the Fed to justify not raising rates.

Be sure to check out our Current Allocations page for our latest signals.

About Jeff Hybiak, CFA
New Kent, VA
Jeff joined SEM in October 1998. Outside of SEM, Jeff is part of the worship team at LifePointe Christian Church where he plays the keyboard and bass guitar. He also coaches a club soccer team.
Previous Post : The Tortoise vs. the Hare   Next Post : In Fed We Trust? (part 2)