Five years ago we wrote about the anger behind the Occupy Wall Street movement.  With growing violence in our country, it’s time we take a closer look at what is behind this anger.

NOTE:  This article was originally posted on October 11, 2011.  The charts & discussion of the economic environment were updated July 19, 2016.

For years I’ve been talking about the social cycle and how it will impact the market over the long-term.  It’s easy to look back at history and identify when trends change, but it is much more difficult to see them when you are living through it.

during the “Arab Spring” and the first near collapse by Greece.  The strikes, protests, and occasional riots in Europe show what happens when you try and use taxpayer money to interfere with the free market.  You get a large gap between the “haves” and the “have nots”.  Many people believe that this was a European problem and that the United States was above this type of unrest.

I disagree.  I’ve discussed this at seminars for years, but rarely in this blog.  The reason being is that the blog is designed to show our readers what is moving the market over the near-term, while the seminars are more big picture type discussions.  I have touched on the topic several times.

On November 30 I wrote, “It seems like the entire world is in a “bad mood” and looking for somebody to bring down. ” Probably the deepest I’ve delved into the social cycle on the blog was back in January following the shooting of Congresswoman Gabrielle Giffords.

“The 4th period of the cycle is also marked by violence and upheaval, but it is typically much worse than the awakening period 40 years earlier because the problems that built up over the prior portions of the cycle are coming to a head.  There is a tremendous gap between the wealthy and the middle class.  The aging ideological generation is trying to get some last minute things accomplished, which creates a large divide politically.  The generation next in line to run the country is trying to figure out how to fix the mess.  So many people are upset about the situation our country is in and the lack of progress towards fixing the problems.  The country becomes very polarized and it results in outbreaks of violence that we thought were not possible in our life times.”

I followed that up on January 31 as we discussed the uprising in Egypt.

“I am often asked if I think the United States could see riots like we are seeing in the Middle East or that occurred last year in Europe.  I typically answer, “No, I think American’s are better off and more civilized than all of those countries.”

Over the weekend it did get me thinking about adding an asterisk to that answer.  If real inflation continues rising, if real unemployment remains high, if the Fed continues committing fraud with the American people’s money, if the gap between the “haves” (Wall Street banks) and the “have-nots” (real Americans) continues to grow, and if interest rates are forced to climb due to the rising inflation, then things could get pretty ugly here in America. If the demand for our bonds declines, or the ability of the Fed to electronically create money diminishes serious cut backs in government spending will be required.

On February 23 as violence was breaking out in Lybia, I wrote:

“The problem is that rather than addressing the root cause of the 2008 financial crisis — too much debt — central banks across the world have decided to solve the debt problem by adding even more debt.  That has further expanded the gap between the “haves” and the “have nots” and has also sparked a sharp rise in food and energy prices.  The global economy, including the United States remains a giant house of cards.  It doesn’t take much to cause it to topple.

The 17% market drop last spring and early summer started with problems in Greece — a country that economically doesn’t really matter.  The 2008 financial crisis actually started in 2007 when a few unknown subprime lenders failed.  While these smaller problems may seem minor they are warnings to the rest of us that the problems have not been solved by 3 years of money printing across the world.

I’ve spent years talking about social cycles and how they will help us to understand what is happening around the world.  The younger/poor/repressed citizens have had enough of the older/rich/ruling citizens.  The way they see it is that the older/rich/ruling citizens have achieved their status by using the younger/poor/repressed citizens.  Right or wrong, that is what is happening around the world.”

“The people in Washington and on Wall Street may not see it, but these decisions — to punish the borrowers and reward the lenders is creating a situation where the differences between the haves and the have nots will continue to grow.  We are seeing how that ultimately plays out in both the Middle East and in Europe.  At some point the “have nots” reach a breaking point and revolt against the “haves”, creating chaos for all.”

That puts us to where we are at today. The people on Wall Street continue to ignore the “Occupy Wall Street” protests that are growing in size and spreading across the country.  While initially the protests lacked focus, as the weeks have gone by the overall theme seems to be, “we are tired of the gap between the haves and the have nots.”  This has the potential to swell to levels that could do severe damage in the years to come.

While I do not agree with some of the people’s demands that they are the ones that should get the hand outs, I do not agree with how the government’s policies have helped a select few corporations that failed so miserably they would have gone out of business without any government assistance.  At the same time the rest of America has been left to suffer.  It is hypocritical to hear Jamie Dimon, the CEO of JP Morgan-Chase say it is “unAmerican” to impose the strict regulations we are seeing come out following the near collapse of our banking system.  It is equally “unAmerican” to bail out failed businesses and allow the same managers that caused the failure to keep their jobs (or not go to jail for the fraud that was committed.)

[Side note — JP Morgan was probably the best run Wall Street bank out there, but they still needed TARP money and over $70B in secret loans from the Fed in order to stay in business.]

So why are the Occupy Wall Street, Tea Party, & other groups so angry?  Let’s put aside our political beliefs and look simply at the DATA.  (The following discussion was updated July 18, 2016):

The official unemployment rate does not tell the whole story.  The “U-6”, which is the official name for what most call the “real” unemployment rate includes those “frustrated” workers that have given up looking for work as well as those that are working part-time, but wish to have full-time jobs.  While this rate has improved, it still remains near the WORST of the previous economic cycle. 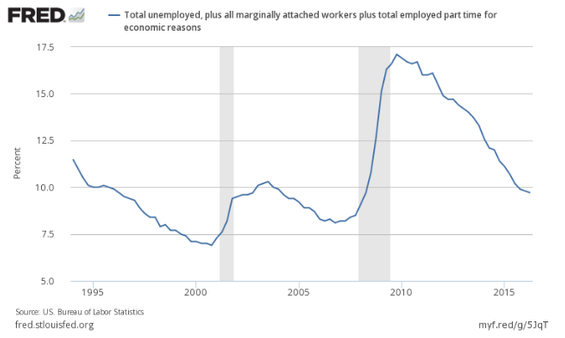 The bigger issue is the income generated by those jobs.  The higher paying jobs of the previous expansion have been replaced by lower paying jobs.  This has led to a decline in household income. 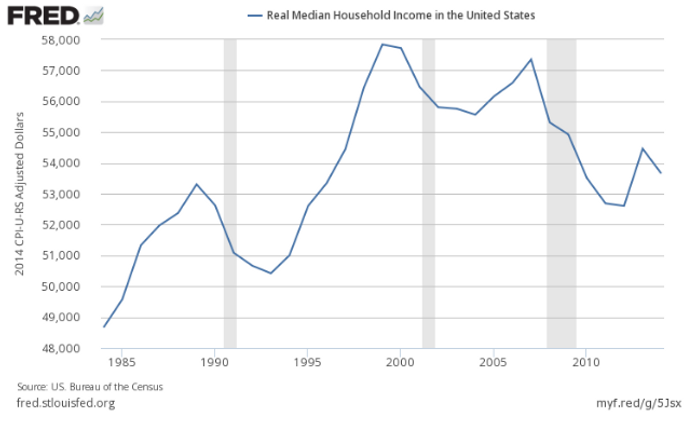 And compare that to after tax corporate profits: 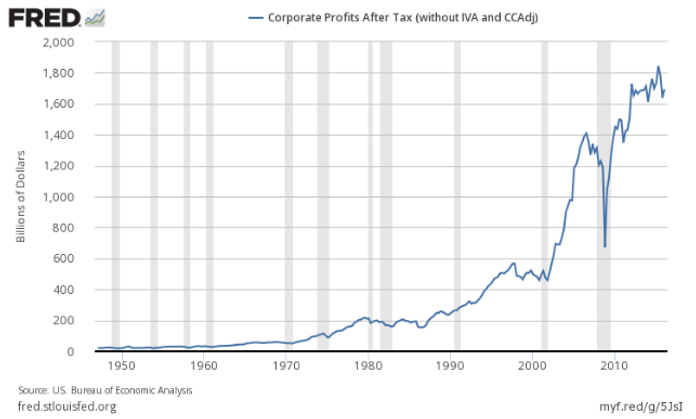 This is really the issue that is causing so much anger — in the eyes of too many Americans the large corporations have gotten richer at the expense of everyone else.  The rise in popularity of Bernie Sanders (which has caused Hillary Clinton to shift far to the progressive left in her campaign) as well as Donald Trump (who has been called the candidate for the “unprotected”) is the direct result of this large divide.  I’ve posted this chart in the past illustrating wages & corporate profits as a percentage of GDP along with a quote from the CFA Institute as to why the shift we have seen over the past 10+ years is not sustainable (wages declining & profits rising as a percentage of GDP).  The quote probably does not go far enough in saying stagnant labor income would cause ANGER in the workers and create a tumultuous economic environment. 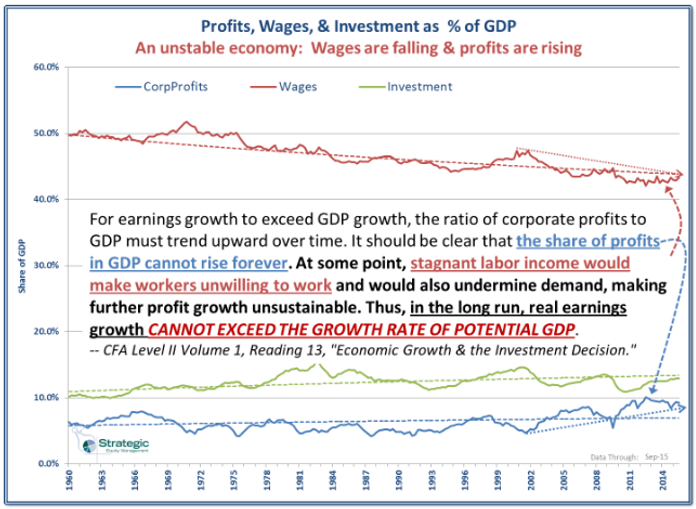 The bailout money is not “trickling down:

Corporations are simply not investing for future growth.  They have spent so much time focusing on increasing shorter-term profits to shareholders via dividends & share buybacks, they have forgotten to include the interest of other stakeholders (employees, suppliers, community, etc.)  In addition, Americans bailed out the Wall Street banks who instead of forgiving or renegotiation loans, used the money given to them via the bailouts and Quantitative Easing to make their shareholders richer.  Most of the money generated by the Federal Reserve via Quantitative Easing remains in the reserve accounts of the Wall Street banks, available as “tier 1 capital” to be used for collateral in their risk taking activities.  While the Reserve Account balances have begun to decline recently, it may be too little to change the growing swell of people demanding major reforms to Wall Street. 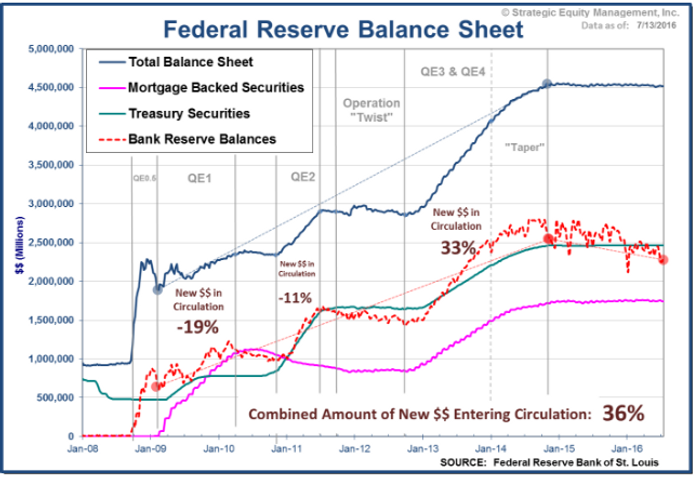 This is another indicator that has improved slightly, but remains a cause of social unrest, especially as the stock market hits all-time highs. 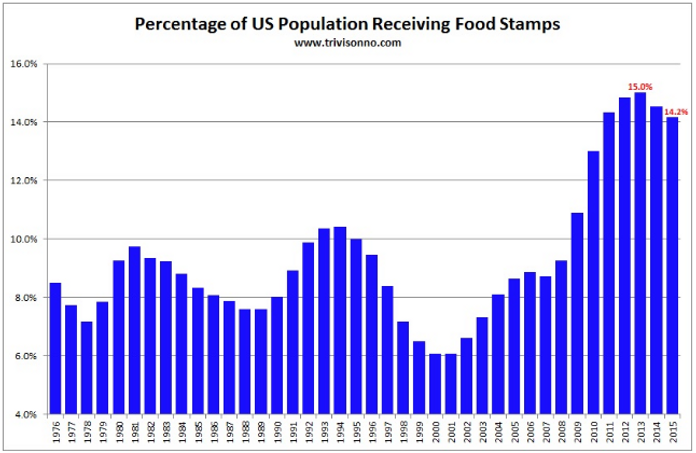 The percentage of our population living below poverty remains high:

Before arguing the jump in Food Stamp recipients is the result of a “socialist” (or progressive) administration the past 8 years, look at the following chart.  The percentage of Americans living in poverty has increased significantly during this century. 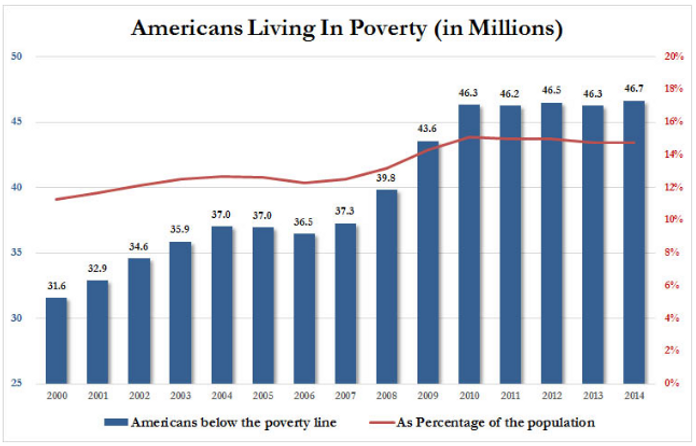 ORIGINAL CONCLUSION (10/12/11): This is something that cannot be taken lightly.  The market may be able to rally on the backs of yet another bailout, but all it will do is continue to widen the gap between the “haves” and the “have nots”.  Whether or not the countries around the world can come up with policies that prevent economic chaos, the solution to these problems will not be easy, which is why we continue to recommend Active Money Management for any investments that you may need to tap into over the next 10-15 years.

ADDITIONAL CONCLUSION (7/18/16): We’ve watched the socioeconomic divide cause widespread violence overseas for years.  We’ve seen it happen in emerging countries, third world countries, and even the developed countries in the EU.  Many people thought Americans were too civilized to resort to that kind of violence.  Five years after I originally wrote this, that violence has come to our country and it is likely to get worse the more both political parties dig into their ideological positions.  I fully believe Americans can overcome this, but it will require setting aside our personal ideological beliefs and working to identify the root cause of the problem.  We have major STRUCTURAL issues that must be addressed.  Those solutions will take communication and sacrifices from ALL sides.  Placing the blame on one side or dictating solutions will only serve to make the violence worse.  The Social Cycle I’ve discussed all these years predicts both the increased violence, but it also predicts the tremendous opportunities that will emerge on the other side of this.  The goal will be to survive and have capital ready to deploy when it arrives.