I find it interesting despite all the letters behind their names, including PhD, how many Fed officials and other economic leaders fail to realize the value of allowing cycles to occur. The purpose of a recession or market correction is to wipe out the excesses that are inevitably created whenever we have a prolonged period of expansion. The way our brains are programmed, the longer something remains on one trajectory, the more we believe that trend will continue. This leads to increasing risk-seeking behavior. The longer the trend remains the greater the risk for a major correction (despite the best efforts of those PhD’s to stop it from occurring.)

Worse, when something unexpected happens our brains suddenly find themselves in panic mode attempting to adjust to this new reality. When this happens we then are faced with making snap projections about what the future may hold. When our brains are put in that position, we often see extreme forecasts leading to a sharp over-reaction in the opposite direction. Stability breeds instability.

We have witnessed this many times throughout our history. From the bombing of Pearl Harbor to the terrorist attacks on 9/11 we saw our country shocked out of our protective bubble and then jump into war with both feet. Those attacks were used as justification to expand the retaliation beyond those responsible for the direct attack. With so many Americans shocked by the attacks, the leaders had a strong consensus to destroy anybody that might possibly do something like that again.

When it comes to investing, just this century we’ve experienced two major shocks to the system where assets that were considered “low risk” simply because they had been going up so much for such a long period of time nearly wiped out. Yes those assets were tremendously over-valued, but at the same time we saw investors over-react and throw out any assets that might possibly resemble the “bad” assets.  Stability breeds instability.

This week I saw a chart from Societe Generale illustrating how stable investors expect the market to be in the future. Expected volatility, which can be calculated based on prices of futures contracts is at the low end of the range for most asset classes. According to the SG research team, this is extremely rare and last occurred in February of 2007. 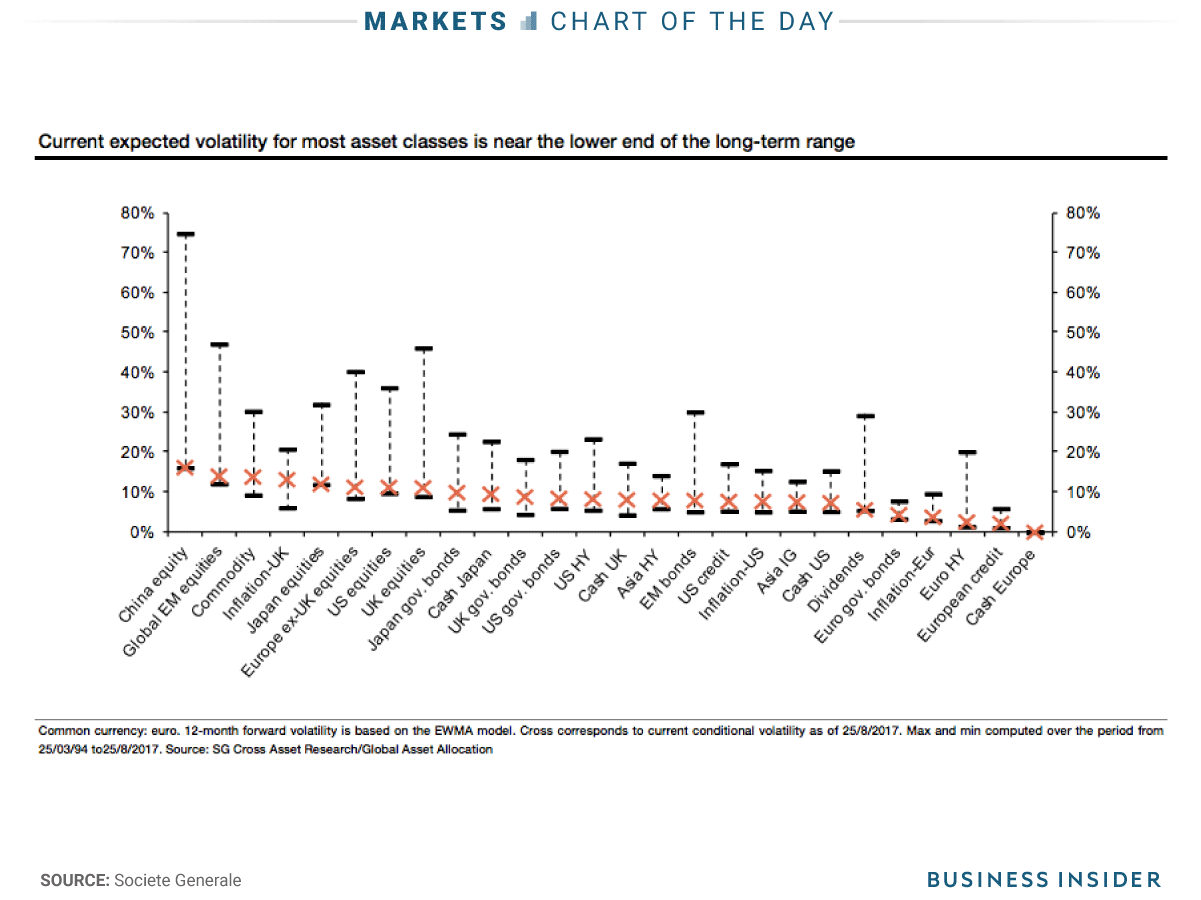 Market participants simply see no risk in the market which has caused far too many portfolios to take on significant risk. The longer this remains stable, the more investors will pour money into these risky assets. This can go on for quite some time, but one thing my experience along with my study of market history tells me is a shock is coming and once again we will see a massive over-reaction to the downside. The Fed and other economic leaders will be defenseless to prevent this shock, often because few will see it coming.

When that occurs is anybody’s guess. Even going back to the last time expected volatility was this low, note the market did not peak for 8 more months. At SEM we will not try to guess when the peak occurs, but will simply continue to monitor our time-tested trading systems for signs we are entering the other side of the market cycle.

I urge you to not fall into this trap. Always keep this in the back of your mind — stability breeds instability.

About Jeff Hybiak, CFA
New Kent, VA
Jeff joined SEM in October 1998. Outside of SEM, Jeff is part of the worship team at LifePointe Christian Church where he plays the keyboard and bass guitar. He also coaches a club soccer team.
Previous Post : The Coming Storm   Next Post : No Follow-Through