Still all about the Fed?

The Federal Reserve raised interest rates this week for the first time in a year. Unlike previous expectations of the Fed pulling back their “stimulus”, the market has not only shrugged its shoulders, but rallied in the face of these rate hikes. This is a welcome development as fundamentals are supposed to drive the long-term direction of the market. This could also allow the Fed to “normalize” its balance sheet (or at least being the process) more quickly than previously thought. One fear most market participants had was the prospect of a recession while the Fed was still in a “stimulus” or “easing” mode.

It would not be a Fed week without me pointing out the failure of the Fed’s policies to do what they were supposed to do. Remember, the entire purpose of the “Zero Interest Rate Policy (ZIRP)” and the various versions of Quantitative Easing (QE) was supposed to be to encourage the banks to lend money. This chart shows the Fed’s Balance Sheet (the blue line) and some of their largest holdings (the green & magenta lines). What I pay particular attention to is the dashed red line which represents the Reserve Balances held at the Fed. 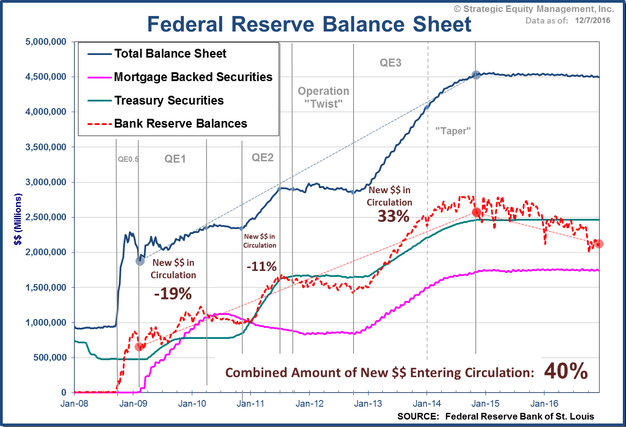 From late 2012 until QE ended in late 2015 the Reserve Balances held at the Fed surged by $800 BILLION. Since QE ended we’ve seen banks put to work $162 BILLION. That still leaves a whole lot of money that could flow into the economy. On the one hand that is a positive as it could hopefully lead to businesses able to invest in large projects. On the other hand that could be HIGHLY inflationary if the money is put to work too soon. The frustrating part is the evidence shows had the Fed simply gotten out of the way and allowed the market to function freely banks could have been doing this the past 3 years and we would all be much better off.

Stocks took a breather on Monday. The action was a mirror image of Friday with Small Caps & financials getting hammered & the large-cap issues holding up relatively well. The futures market indicates a reversal of Monday’s trading to start the day as the Fed begins their 2-day meeting this morning.

Since the election it appears the market has finally broken its correlation to the Fed & their policies. The market has priced in a 100% chance of a Fed rate hike tomorrow and the market has continued to march higher. 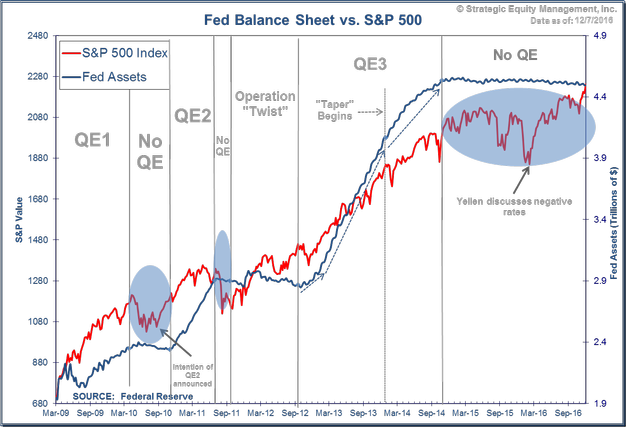 This is a welcome sign, but I’m not sure everyone has fully factored how things have changed. We are seeing fear turn into greed for the market participants (see last week’s “Chart of the Week” for the implications of this shift). In addition, the landscape has clearly changed for the economy with the “shock” of the election and Republicans having full control of the government. Most people are wondering if the Fed will address that “elephant” in the room (pun intended). This could change a lot of things & the Fed risks letting inflation run out of control if they are not careful.

Stocks were back in rally mode on Tuesday as they continue to look past the impact of a Fed rate hike and more at the prospects of strong economic growth due to fiscal stimulus. There are few examples of a market/economy where we see fiscal stimulus at the same time as monetary tightening (1993-1994 is one possible example, but I need to do more digging and research.)

Focusing just on the monetary side of things (what the Fed controls), I feel the need to again remind our readers the fact the Fed only has control of SHORT-TERM interest rates. They may set the tone for the direction of interest rates in general, but the market still controls what happens with interest rates over the longer-term. When the Fed launched their various QE programs, one of the stated goals was to lower long-term rates. What actually happened during their QE periods was the exact opposite of what they wanted to happen — long-term interest rates went UP. It wasn’t until they ended a program for a few short months that rates actually went down. Of course as we expected all along and illustrated with our charts the last few days, the Fed seemed to care more about what the S&P 500 was doing in reaction to their policies than what banks were doing with the money or what was happening with interest rates. 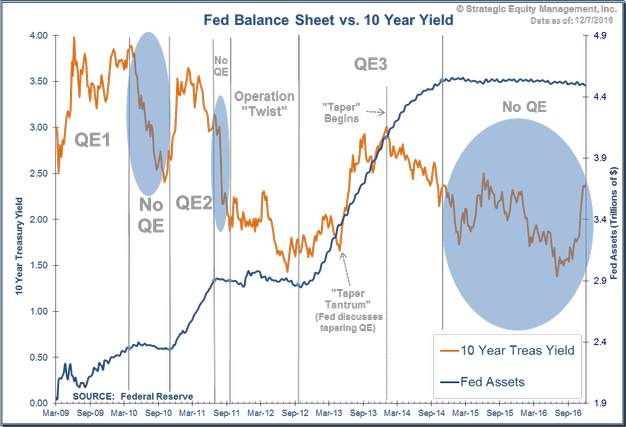 It has only been since the election that we have seen long-term interest rates go up. The market is well ahead of the Fed in getting concerned about the inflationary impact of Trump’s fiscal stimulus ideas. Remember, inflation erodes the value of interest payments, which makes bonds less valuable.

Unfortunately we will not know until it is too late whether the Fed’s snail-like interest rate hikes or the market’s panic was the right reaction to the Trump victory. What we do know from experience is the Fed has almost always been way too late and way too slow to react to changes. Keep that in mind as you read the economic projections  and listen to the press conference today.

The “Trump Rally” was briefly halted on Wednesday after the Federal Reserve raised interest rates. The hike in rates was not a surprise. What did surprise market participants was the Fed’s “dot plots” which shows their economic & interest rate projections. 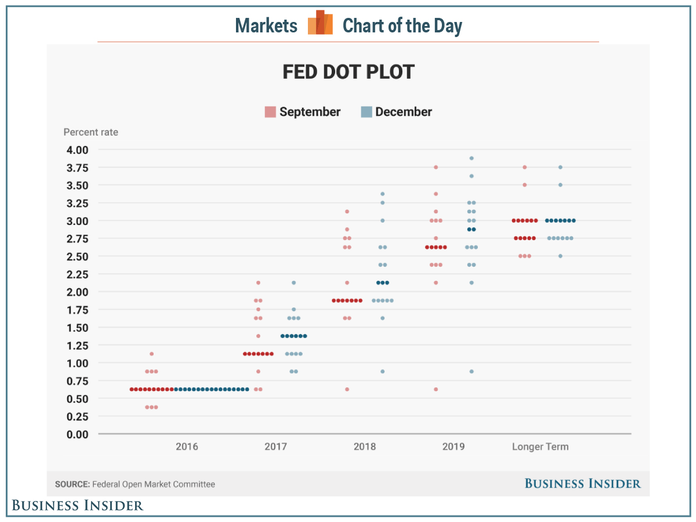 Goldman Sachs provided a better graph of the data in the interest rate projections from the Fed members. It clearly shows a quicker path to higher rates from the September projections. 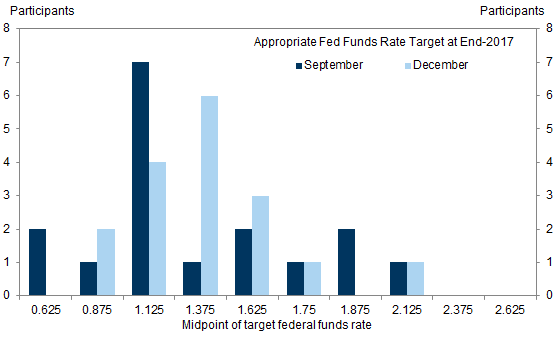 As Rick & I discussed the (over) reaction by the market [stocks selling off and 10 year Treasury yields moving 10 basis points higher from where they were at before the announcement] I reminded him a year ago when the Fed raised rates for the first time since 2006 their projection was for 4 rate hikes in 2016. We got 1. Again & again & again the Fed is completely wrong with their projections and yet the market somehow reacts to them like they are guaranteed.

One thing that might have gotten the market more concerned came about during the press conference. Chair Yellen was pressed on her comments earlier this year about running a “high pressure” economy. Beginning in February when she first discussed the Fed’s research into negative interest rates she has been talking mostly in “theory” to give the markets confidence they still had tools available to fight a recession if one came about. This morphed into the “high pressure” economy theory where the Fed lets inflation overheat to see if it generates “above trend” economic growth. She reminded the audience this was merely one of many theories the Fed discusses and not something they were considering imminently.

This along with the potential for higher rates throughout 2017 threw a bit of cold water on the prospects of easy monetary policy and sizable fiscal spending sparking GDP growth of 4% or more.

Stocks stabilized on Thursday following a bit of a tantrum after the Fed voted to raise interest rates on Wednesday. Treasury bonds were again hammered and the dollar continued to march higher. Both could put pressure on earnings in 2017. The increase in bond yields relative to stock yields could also put some pressure on stock prices if this continues. Remember the argument for the better part of two years was the attractiveness of stocks vs. bonds due to higher stock yield (which ignores the RISK differences between the two.) Now we have the low risk (if held to maturity) Treasury bonds giving you higher coupon payments than high risk stocks.

In addition to that, SocGen is arguing the increase in Treasury yields puts stocks in a “danger” zone. I don’t fully understand the way they are calculating this, but it has to do with the risk premium of stocks relative to bond yields. According to their data, a Treasury yield above 2.6% makes bonds more attractive on a risk adjusted basis than stocks.

What did we learn this week?

All of the above tells me we need to be cautious when setting our expectations for 2017 and not fall into the trap of increasing stock exposure simply because 2016 was a strong year for stocks and a weak one for (buy & hold) bonds [SEM’s bond/income programs have had a very nice year despite the weakness in the overall bond market.]

About Jeff Hybiak, CFA
New Kent, VA
Jeff joined SEM in October 1998. Outside of SEM, Jeff is part of the worship team at LifePointe Christian Church where he plays the keyboard and bass guitar. He also coaches a club soccer team.
Previous Post : Odds not in Trump&#39;s favor   Next Post : The Investor Behavior Cycle