The stock market has rallied since the election of Donald Trump in an unprecedented fashion. It has broken records for most consecutive positive months, the first calendar year on record to not have a losing month, the longest streak without a 3% or 5% correction, the lowest daily standard deviation, and the lowest drawdown in a calendar year. All of this was based on one premise — a Republican president and Republican Congress would cause a strong uptick in economic growth. Granted, it takes time for economic policies to take hold, but we’ve seen little in the way in an acceleration of economic growth over the past year.

2017 was a “nice” year for the economy, but the growth trend actually started in early 2016 following slowing growth in 2015. This was obviously well before the election and isn’t an endorsement of any political party. It is simply a function of the economic cycle. As I’ve said for the past 9 years, the Fed was actually causing economic growth to stagnate. Once they stopped their final quantitative easing program, banks began releasing their excess reserves into the economy. The easy money game of buying Treasuries and flipping them back to the Fed for a guaranteed profit gave the banks little incentive to lend money or invest in longer-term projects.

On Friday, the 1st estimate of 4th Quarter GDP was released. The “official” reading was +2.6%, but as my long-time readers know this is misleading. The “official” estimates measure the change from the prior quarter, adjusts it for “seasonal” factors using some sort of ever-changing formula, and then annualizes it (essentially multiplying one quarter’s worth of growth times 4). To remove seasonal adjustment formulas and misleading compounding, I have found using the year-over-year change in GDP gives us a much cleaner read on the economy. This week’s Chart of the Week shows the official GDP and the year-over-year number. 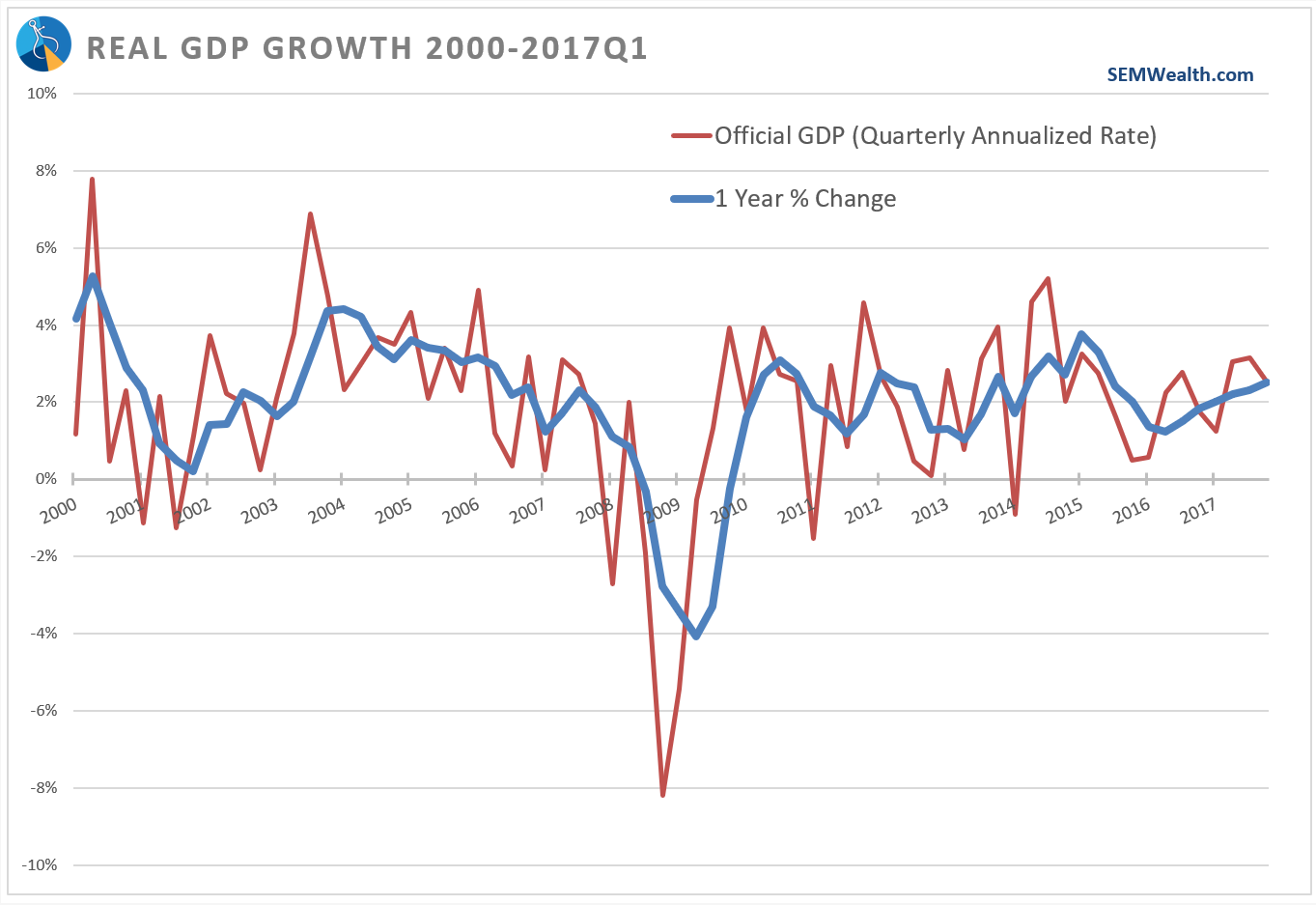 A 2.5% growth rate is respectable, but it is still significantly below average.  If we use non-partisan estimates of the impact of tax cuts, we should see growth pick-up to around 2.8 to 3%, which is STILL BELOW AVERAGE. (The long-term average is 3.1%) Of course the President’s advisors are predicting 4-5% annual GDP growth due to the tax cuts. I hope the economy can smoke whatever these advisors are smoking. I’d love to see that for a few years!

As it is, at SEM we base our analysis on actual data, not WAG’s based on ideological policy positions. Growth has picked-up some, but the tax cuts better start showing an impact soon or you may hear something you haven’t heard from me since 2007 — talk about a pending recession. Since the Chart of the Week is 3 days late, here’s a bonus Chart of the Week — SEM’s Economic Model (which is part of our Dynamic Models’ allocation decision). 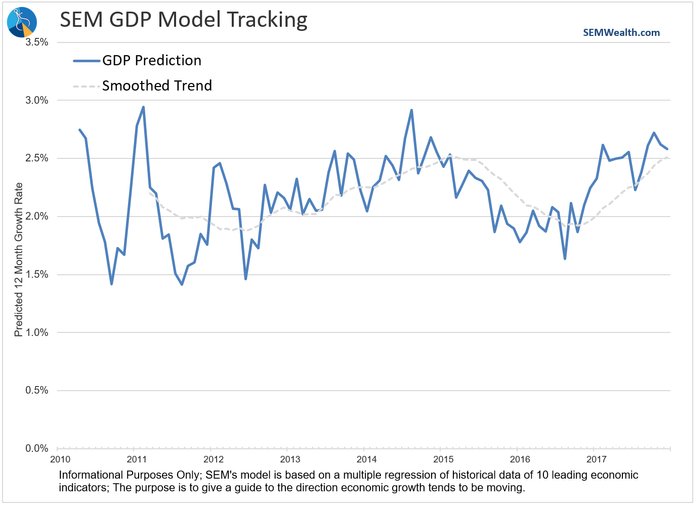 While our model uses a smoothed trend we will be watching it closely for signs of a reversal. Already housing starts and building permits are showing signs of weakness (higher rates aren’t helping). Employment has also slowed in recent months as has consumer sentiment. The tax cuts SHOULD help, but if it doesn’t we could see a massive sell-off in a market that has already priced in well above average economic growth.

I was at a CFA annual forecast dinner on Thursday night in Richmond. The guest speaker was Blackrock Chief Fixed Income Strategist Jeffrey Rosenberg. He asked the over 350 CFAs in attendance how many people thought the economy would go into a recession this year and nobody was brave enough to raise their hands. Only a handful thought the market would go down. During his presentation Mr. Rosenberg cited this sentiment as one of his worries — everyone thinks things are going up, which could cause both the economy and markets to overheat.

One of the things Mr. Roseberg said that stuck with me — “be careful what you wish for.” For 8 years the Fed urged Congress to implement some fiscal stimulus (massive spending programs and/or tax cuts). There are many flaws in the way these tax cuts are structured, so if they don’t lead to a permanent uptick in “potential” GDP growth (I don’t believe they will) the only thing the tax cuts will do is give us a temporary, inflationary boost to the economy, an extra $10Trillion in debt (nearly a 50% increase in 10 years), and force the Fed into raising interest rates faster than the market has priced in.

About Jeff Hybiak, CFA
New Kent, VA
Jeff joined SEM in October 1998. Outside of SEM, Jeff is part of the worship team at LifePointe Christian Church where he plays the keyboard and bass guitar. He also coaches a club soccer team.
Previous Post : The Value of a Coach   Next Post : A Myopic View