The aftermath of a parabolic move

2017 was a record breaking year for the stock market in terms of volatility (or lack thereof). This led to money flooding into stocks to start 2018 as the expectation for more calm ahead drew money away from other lower risk asset classes. The massive influx of cash sparked a nearly parabolic move for stocks in January. In February & March investors learned a hard lesson — when stocks experience abnormal returns they could quickly reverse the other direction. This continued into the current quarter with the largest drop to start the 2nd quarter since 1929. 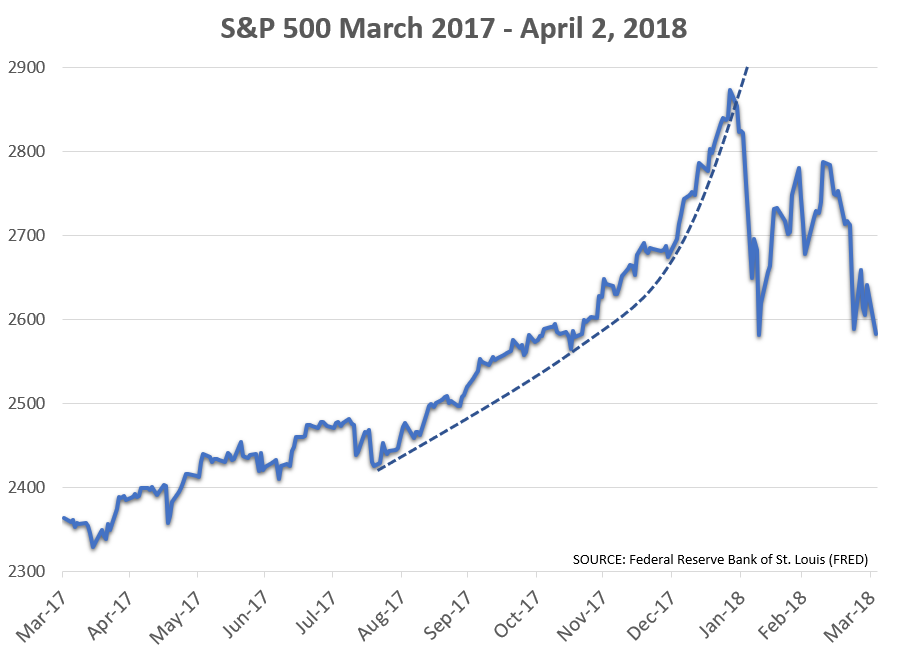 Despite the large losses, the market rallied back enough to embolden more investors to believe the worst was over. The back and forth swings may lead to even bigger swings in the months ahead as investors question the stability of the stock market.

The larger the moves (up & down) the more emotional we tend to become. Remember this as we deal with terrain most investors have forgotten after a 9 year bull market.

After a one-day snap-back the market is heading lower once again. The culprit today is once again the fears of a full blown trade war with China. While this may resolve itself without too much damage, this is something we should not take lightly. For more read:

We will see what the rest of the month and quarter brings, but our Dynamic & AmeriGuard models are not optimistic. The Dynamic portfolios, while still technically neutral sold an additional 10% of their positions on the close Tuesday. AmeriGuard portfolios also received a sell signal that was implemented on Tuesday. The Growth & Aggressive portfolios are fully “bearish”. The Balanced & Moderate portfolios still have the “trend indicator” on a buy signal. This indicator is the only component that could trade intra-quarter. A sell there would reduce equity exposure by 10% & 20% respectively.

Our tactically managed bond programs (INA & TB) continue to be bearish as they have been since mid-February. EGA had retreated back to around 65% invested to close the quarter, but jumped back in to around 90% following the big loss on Monday. This increase is likely going to be temporary unless there is solid buying off the lows.

Last night I read a quote from Hyman Mynsky that said, “The longer something is stable, the more instability it creates.” Essentially, stability breeds instability. After the lowest volatility on record in 2017 the stability investors expected lulled could result in irrational actions if the market moves much lower.

Stocks staged an impressive comeback on Wednesday, bouncing off the lows of the day to close positive. Traders cited a growing sense the Trump tariff talk is just that following comments by newly appointed economic advisor Larry Kudlow that this tough talk is just the start of negotiations. I guess time will tell.

Either way, this type of volatility can be dangerous. Having a well thought out, pre-defined strategy is the only way to survive environments with so many unknown events looming. 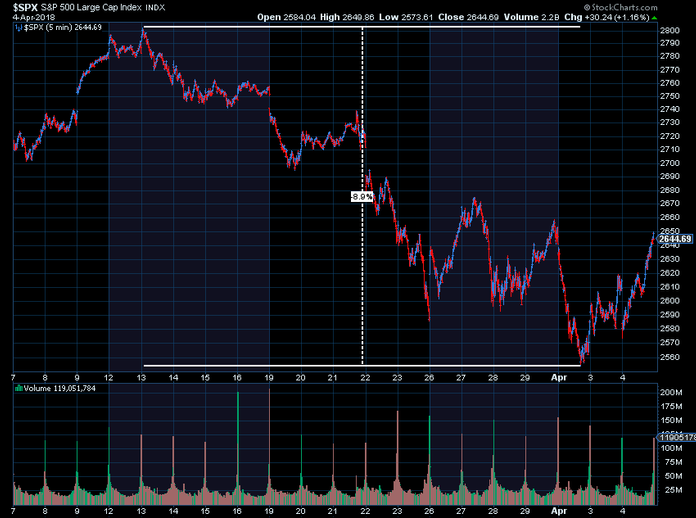 Having such a strategy is the only way we’ve survived the last 26 years and why we are confident we will be ready for whatever the market throws our way.