“Nobody wants to pay a fee for something they can do themselves.”

Those are just a sampling of the comments I’ve heard the past few years as the current bull market has become the third longest in history. What people seem to forget is I heard the same thing in 1999/2000 and 2006/2007. This week’s chart of the week illustrates the rise (and subsequent fall) of passive investments over the past 25 years. 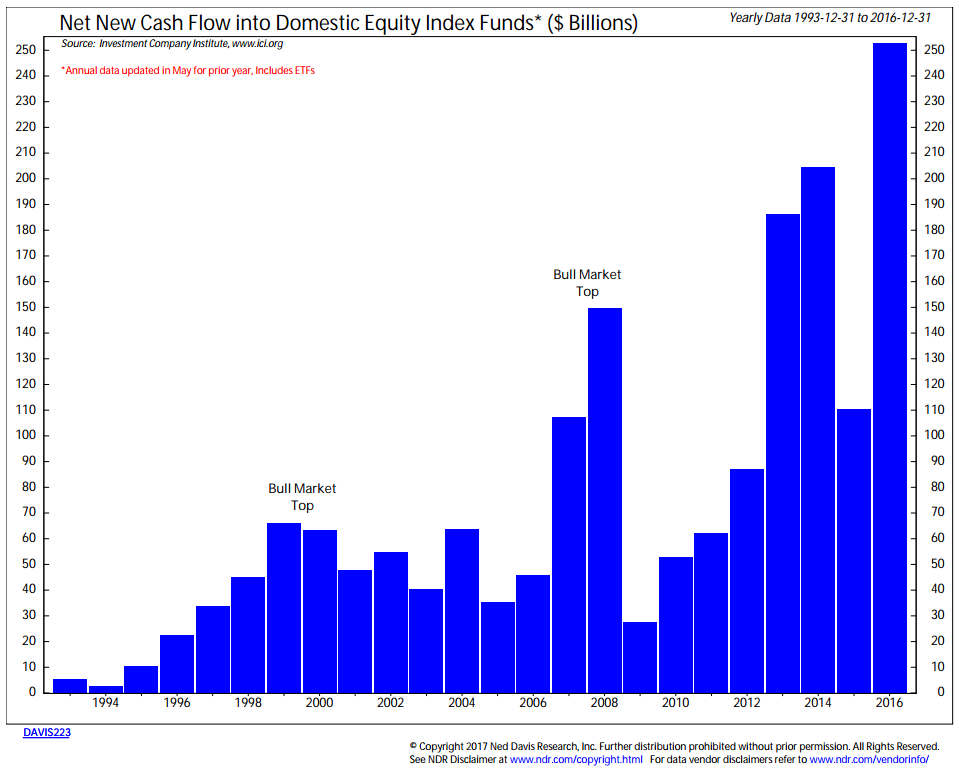 One thing to note is the chart is not indexed for inflation, increases in wealth, etc. The annualized growth rate of the current level is about 8% — about the long-term rate of return for the market. Don’t get me wrong — I think there is a place for passive investments in most portfolios. However, it depends on many factors and is certainly not suitable for all. The massive drop in cash flow illustrates the primary reason active management — especially active RISK management such as that deployed by SEM is so important.  If passive management was so great we wouldn’t see a big drop of asset flows during bear markets. Instead, investors react emotionally and sell their passively managed funds, locking in the losses and not climbing back in until it is too late. They may say right now they can handle the downside and will be ready to buy more when it drops, but this isn’t my first rodeo (or bull market bubble.)

One thing I don’t think most people understand is the fact that if EVERYONE followed a passive strategy price discovery, the very thing that makes the market’s semi-efficient would disappear. The only thing that would drive prices would be cash flows into our out of the market, which would lead to market swings more volatile and magnified and subject to the emotions of the market participants. If everyone was “passive” value investors would not exist, which means there would be nobody standing ready to scoop up bargains during a bear market.

Look at the chart again and realize the more passively managed investments in the market place there are, the more likely the market is at risk for significant declines.

About Jeff Hybiak, CFA
New Kent, VA
Jeff joined SEM in October 1998. Outside of SEM, Jeff is part of the worship team at LifePointe Community Church where he plays the keyboard and bass guitar. He also leads a small group Bible study.
Previous Post : The Role of the Financial Advisor   Next Post : Status Quo Bias