The Year of Trump

While President-elect Donald Trump may have been voted “Man of the Year” by Time Magazine for 2016, for investors it is tough to see any one thing “Trumping” the primary focus in 2017 other than the man himself. 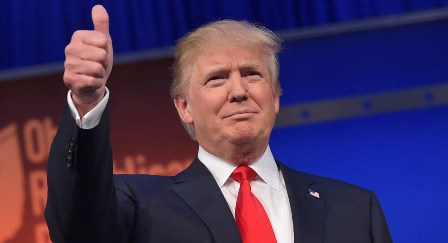 Since the election the market has rallied in anticipation of some pro-growth, pro-business polices that are expected to prevail in 2017 and beyond. While I hope that is the case, the more the market rallies, the higher the hurdle for President Trump’s policies. There is a reason the old adage “buy the rumor, sell the news” continues to hold today. Often times the market gets far too ahead of itself in anticipating a big event, which leads to disappointment when it finally happens.

Over the past few weeks I provided Ned Davis Research’s comparison of the current environment to the one inherited by Ronald Reagan, I showed the statistics of what is often a difficult first year for the market when a Republican takes over for a Democrat, we posted a Podcast discussing these expectations, and I ended my latest economic update & outlook by highlighting what may actually happen in 2017 (beginning at the 16:23 mark).

The market started 2017 with the underlying high growth, low regulation theme taking the lead on the first trading day. Regardless of your political beliefs or feelings on Donald Trump’s policies, it is hard to ignore the change in attitude we’ve seen in investors and many Americans. They wanted changes in Washington and they certainly may get them. This seems to have ignited some pent-up animal spirits.

One particular area this has been apparent is in Consumer Sentiment. It had been declining fairly rapidly in the fall, but the last two months we’ve seen a strong spike in the reading. In December it eclipsed the high of the recovery set in January of 2015 and is now at the highest level since 2004. 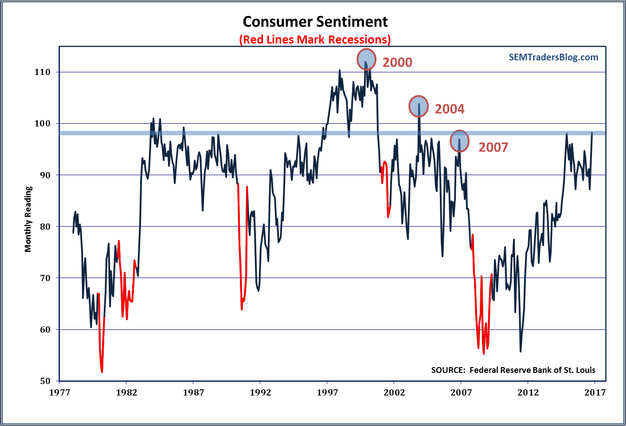 If this continues those strong growth expectations could be realized in 2017, which could make a very nice year for the market.

Yesterday we learned even the Federal Reserve is spending a great deal of time wondering what impact President Trump will have on the economy. “Uncertainty” seemed to be the theme inside the latest Federal Reserve meeting according to the minutes released yesterday. They did acknowledge the prospects for stronger growth if Trump’s initiatives are fully implemented.

“In their discussion of their economic forecasts, participants emphasized their considerable uncertainty about the timing, size, and composition of any future fiscal and other economic policy initiatives as well as about how those polices might affect aggregate demand and supply.

“Several participants pointed out that, depending on the mix of tax, spending, regulatory, and other possible policy changes, economic growth might turn out to be faster or slower than they currently anticipated. However, almost all also indicated that the upside risks to their forecasts for economic growth had increased as a result of prospects for more expansionary fiscal policies in coming years.”

However, they also cited concerns over inflation, which would mean having to move faster than expected on interest rates and that it will be difficult to communicate what they are seeing.

“Moreover, uncertainty regarding fiscal and other economic policies had increased. Participants agreed that it was too early to know what changes in these policies would be implemented and how such changes might alter the economic outlook. It was also noted that fiscal and other policies were only some of the many factors that could influence the economic outlook and thus the appropriate course of monetary policy. Moreover, many participants emphasized that the greater uncertainty about these policies made it more challenging to communicate to the public about the likely path of the federal funds rate.”

My take continues to be what I’ve said all along — we could have “yuge” growth in 2017 and the years beyond that justifies not only the current stock prices but significant gains for years to come. However, nothing in Washington ever goes smoothly and based on a comment from Vice-President-elect Mike Pence saying the first priority was to repeal and replace “Obamacare”, the administration could quickly go off the rails and run into serious roadblocks in Washington and on Main Street. This could make the chances of any form of fiscal stimulus shrink and the prospects of a sharp stock market correction highly likely.

In my discussions with advisors the past several weeks there seems to be one common theme — uncertainty. Most do not seem to be as confident as the stock market participants in President Trump’s ability to spark the strongest economic growth of the 7+ year recovery. Stock analysts are also confident we will see strong growth, with current earnings estimates calling for a 20% jump in corporate earnings.

With the market entering the year already “overvalued” based on the historic average price/earnings ratio there is a high bar for the new president & US corporations. A few weeks back in our “Chart of the Week” we illustrated the possible path the S&P 500 might take in 2017. If corporations hit their estimates AND stocks remain overvalued (or get even more overvalued) it could be a banner year for the market. Stocks could still post gains even if earnings disappoint, but that would require stocks to remain overvalued. Typically if earnings slow or disappoint, the market quickly reduces the valuations, which would then mean potentially large losses for the market.

This simple projection shows why it is dangerous to be overly confident in Trump being able to spark strong growth. 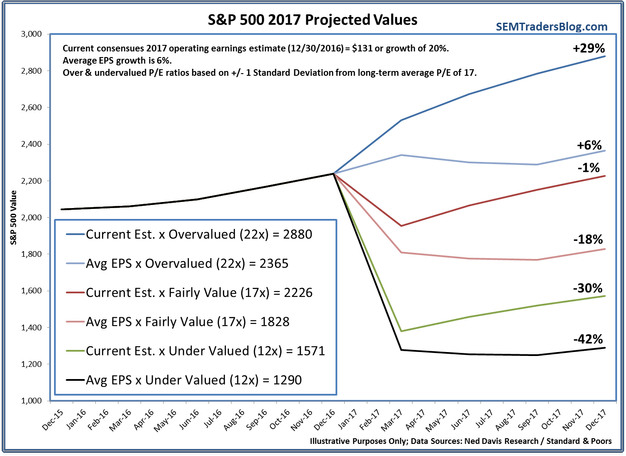 We are currently heavily invested in all of our programs and thus can take advantage of a strong growth / overvalued market. However, we are not stuck to that allocation and can quickly adjust our exposure if necessarry.

About Jeff Hybiak, CFA
New Kent, VA
Jeff joined SEM in October 1998. Outside of SEM, Jeff is part of the worship team at LifePointe Christian Church where he plays the keyboard and bass guitar. He also coaches a club soccer team.
Previous Post : The most important indicator of 2017   Next Post : 2017 Projections