It’s the time of year where portfolio managers and investors alike are in a festive mood, which typically leads to a nice rise in the market. The so-called “Santa Claus” rally typically begins the week before Christmas and then carries into the new year. Whether it is due to more money coming into the market ahead of year end, a shift by managers to buy what has done well this year to make their portfolio look better, or simply due to rosier sentiment surrounding the holiday season, the last two weeks tend to be positive ones with little news to sway them (exceptions tend to be years when the market was already negative for the year such as 2000 & 2008.)

To help get in the holiday spirit this week, I thought I’d take a look at some famous Christmas movie lines and how they relate to the current market.

“Look, Charlie, let’s face it. We all know that Christmas is a big commercial racket. It’s run by a big Eastern syndicate, you know.” — Lucy Van Pelt 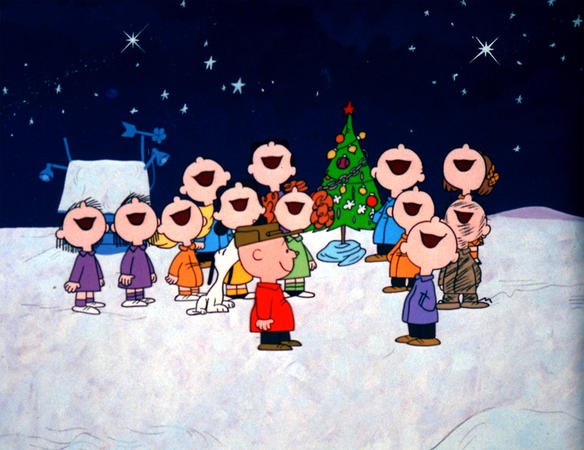 All last week we discussed the “Eastern syndicate” that has been running the show for the past 8 years — the Federal Reserve.  Unlike Lucy’s conspiracy theory on Christmas there is a great deal of evidence the Fed has put a micro focus on the reaction of the market to their policies. The data also supports this theory, although they have had little impact on longer-term interest rates. It finally appears they have lost the grasp on the stock market and the bond market is well ahead of the Fed in terms of raising interest rates. I’m not sure if everyone will sing “Hark the Herald, Angels Sing” as this story comes to an end….possibly as early as next year.

“If you can’t believe, if you can’t accept anything on faith, then you’re doomed for a life dominated by doubt.” – Kris Kringle 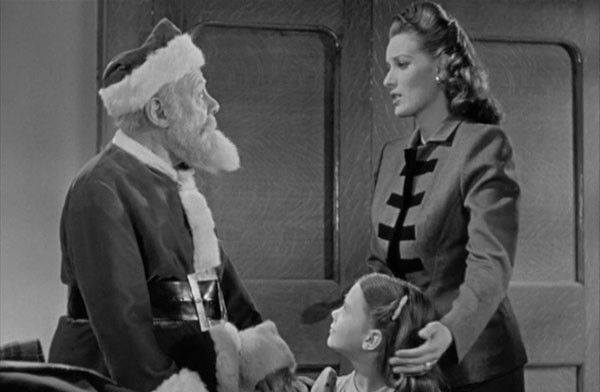 While I have certainly earned the nickname “Mr. Sunshine”, I am an optimist at heart. Miracle on 34th Street is one of my favorite Christmas stories because it focuses on child-like faith in something many stopped believing in because “life” simply didn’t work out like they expected.. However, I earned my nickname by also knowing when there is sometimes unwarranted faith in something. Since the election we have seen an impressive market rally as market participants suddenly woke up to the prospect the government might actually do something to help our economy grow…….something we have not really seen this century.

While I share Ned Davis Research’s concerns that President-elect Trump is facing a difficult battle ahead (click here for the NDR Report), I think more than anything this rally is about hope. For years I’ve been saying we need to see a major STRUCTURAL shift in our economy, but to do so we have to “tear down” the institutions and structures that have pushed our economy into this lackluster death spin. I called Donald Trump the “tear it all down” candidate from the beginning and his victory is a sign Americans are waking up to the fact that something is broken.

This of course does not mean it will be smooth sailing for President Trump the next 4 years, but it does mean we can start believing our country can be “great” again. It will take time and many of the solutions will be painful, but if America is finally ready to acknowledge we must change, we have started down the right path. 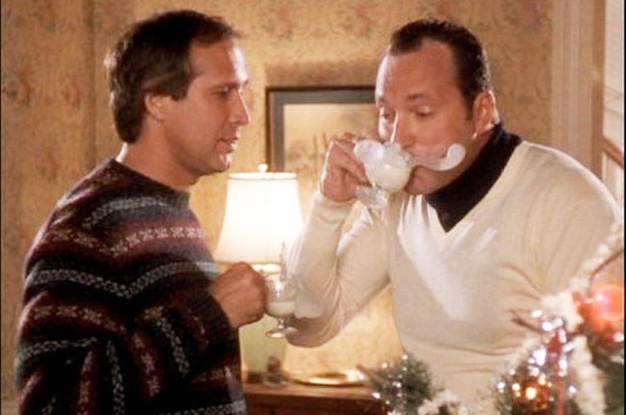 This is easily my second favorite Christmas movie. We always start and end the Christmas season with this movie at our house (with many more viewings in between.) There are a lot of quotes & analogies I could use from this one. I chose this quote for a couple of reasons. First, I can not get over how “shocked” so many people were that Donald Trump won the election. Those not understanding WHY the IDEA of Donald Trump was so appealing to so many Americans have failed to see the unraveling that has happened in our economy.

Too many people have dismissed Trump’s victory as being driven by the “Cousin Eddies” of our country in the midwest. While there were certainly many “red neck” supporters of Trump, the reason he won is because for too long the left has focused on legislating “equality”. The problem with that is the definition of “poor” has meant those barely scraping by are “too rich” to get any help from the government, which means paying more INTO the government.

On the other side the right has focused too much on legislating “morality”, which is a turn off to many moderate voters. The irony is the Republicans on the right say they believe in small government yet do not mind pushing laws that tell Americans how to live their life. At the same time you have the Democrats on the left telling us what we can and cannot say. In walks a “Cousin Eddie” candidate that says whatever is on his mind that threatens to throw the entire system into chaos. After feeling like their voice was not being heard for so long, those “stuck in the middle” voted for chaos.

For some reason, I can’t stop worrying the clip below might be the scene next year as President Trump begins to implement some of his campaign ideas. It may be peaceful right now, but we certainly have a lot of “stuff” to clean out. (Warning — there is some PG-13 language in this clip.) 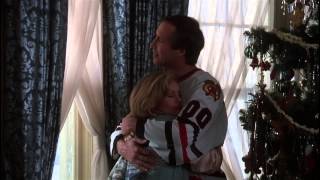 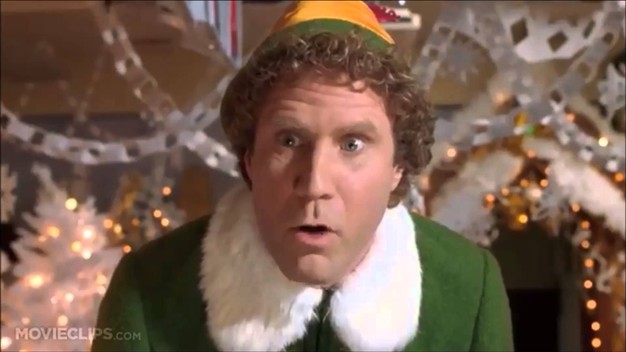 This movie has moved into a close tie for second favorite in our house. The innocence of Buddy as he learns he is not really an elf and discovers the real world is some light-hearted fun at a time of year where everyone takes things far too seriously.

Unfortunately for investors, I feel like they have been a little too much like Buddy lately in their assessment of the economy and stock market. They have a child-like disposition on Santa Trump believing he will fix everything that has been wrong with the economy this century.  While from my perspective I am glad to have somebody that is not only pro-business, but also understand the importance of investment by the government, I’m not sure he’ll be able to deliver on many of his promises. The market is pricing in a perfect execution of his positive plans and ignoring any possible negative outcomes despite his inconsistent behavior.

Bespoke threw a little cold water on investors yesterday when they posted on Twitter a table showing the market reaction before and after the election based on the outcome (check out our Chart of the Week for the details.)

Granted there have only been four occasions since 1928 when a Republican challenger took over from a Democrat, but all 4 have had negative outcomes the following year. In 3 of the 4  the market rallied nicely after the election. The only year it did not was in 2000 when the election was not officially decided until December. The more growth the market prices in, the more likely it will be disappointed when “Santa” smells like ‘beef and cheese.’

It’s something to think about as you make plans for 2017. If I’ve sapped too much of your Christmas cheer, here’s some clips of Buddy to bring it all back. 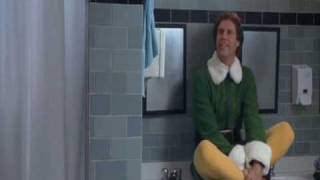 “Do you know how long it takes a working man to save five thousand dollars? Just remember this, Mr. Potter, that this rabble you’re talking about…they do most of the working and paying and living and dying in this community. Well, is it too much to have them work and pay and live and die in a couple of decent rooms and a bath? Anyway, my father didn’t think so. People were human beings to him, but to you, a warped frustrated old man, they’re cattle. Well, in my book he died a much richer man than you’ll ever be! “- George Bailey 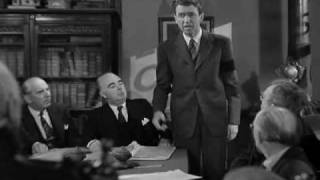 This is by far my favorite Christmas movie. My oldest daughter and I have watched this movie together every Christmas Eve for as long as I can remember (and our youngest daughter has joined us the last two years.) There is so much from this movie that is still applicable today. One of the themes of the movie is the “David vs. Goliath” that plays out between the Baileys and Mr. Potter. Keeping in mind this movie was set during the last major uprising in our country, the scene above certainly could be played out today.

Our country is going through a Social Uprising because for too long the rich have gotten significantly richer, the poor have received more and more benefits and taxpayers from the middle class have gone nowhere. The “surprise” of the election is the direct result of those stuck in the middle saying “enough!” It could certainly get worse before it gets better despite the rosy outlook the market participants have for the year ahead. Ironically enough it appears the “Potters” (the Wall Street bankers) are not only going to not be punished for their actions, several of their own are going to be on the new president’s cabinet.

How this plays out between now and then is anybody’s guess. For me, I’ll continue to be the “dreamer” George Bailey, always looking out for the little guy & holding out hope that those that do the right thing for the right reasons will eventually win in the end. This will take patience, discipline, strength, and a whole lot of character to not waver. This is the scene I picture whenever I grow frustrated that the big guys seem to only be getting bigger at the expense of the little guys. I hold out hope that eventually the “right” thing will happen and those that do the right thing will be rewarded. This is the reason I always tear up during this scene. 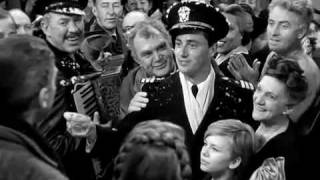 From all of us at SEM to all of our loyal readers, we hope you have a very Merry Christmas!

About Jeff Hybiak, CFA
New Kent, VA
Jeff joined SEM in October 1998. Outside of SEM, Jeff is part of the worship team at LifePointe Christian Church where he plays the keyboard and bass guitar. He also coaches a club soccer team.
Previous Post : Economic Update & 2017 Outlook   Next Post : Odds not in Trump&#39;s favor