This week we learned the Median Household Income of Americans finally surpassed the 2007 peak. Inside the report released by the Census Bureau was a long discussion of the “lost decade” for most Americans. Masked by the overall income level is the fact average earnings are down, but employment is up. This means Americans are working MORE to earn the same amount of money they earned a decade earlier.

As we’ve seen in the political rhetoric, the last decade has not been bad for a small percentage of the population. I do not want to fan any flames because I am a true believer in capitalism, but this week’s chart of the week is a major problem with our economy going forward. The average American household has gone sideways for TWENTY YEARS! Meanwhile, Corporate Profits are up a whopping 246% in the 21st Century. I’ve indexed both data points to the beginning of the financial crisis so we can better compare the more recent numbers. What is interesting is to look how far corporate profits have climbed since 1999. 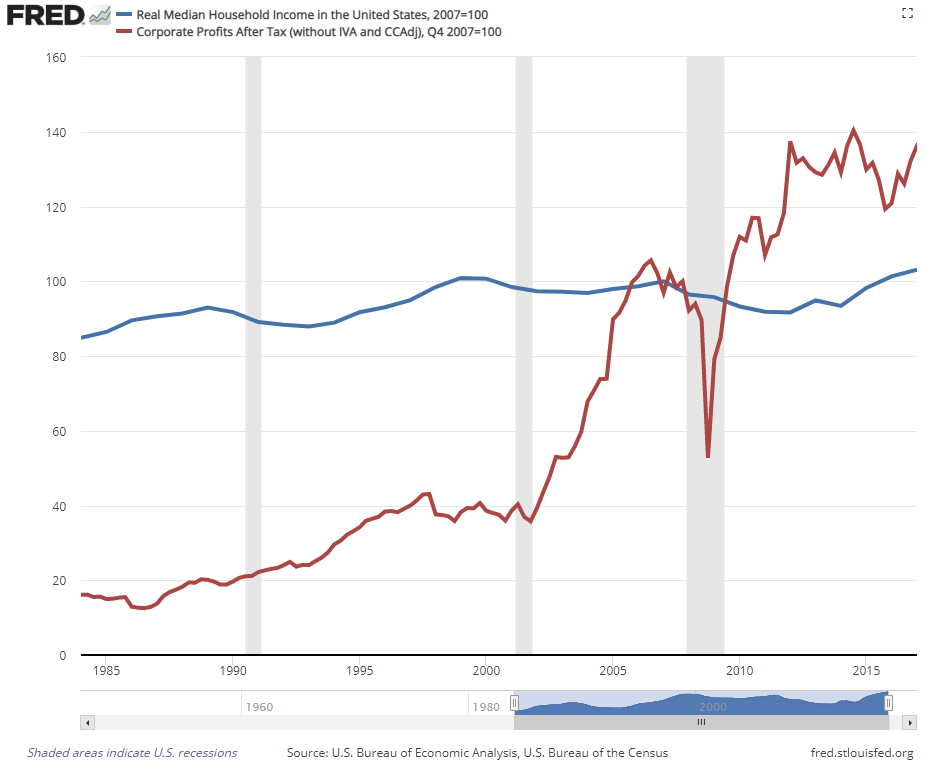 If you look closely, you will see the trend in the 1980s and most of the 1990s in both income plots follows the same trends. As corporations made more, the average American Household made more money. This has not been discussed by very many people, but it is a huge problem that is fueling the move towards socialism from the far left, which is further entrenching the far right into their belief in “trickle down economics.”

I know EXACTLY what happened due to my unique college experience. I left my small town right out of high school to go to a 4-year University. I was not ready for the tedious general education credits and when I found a job in accounting (my original major) that paid four times what I’d ever made at other jobs, I decided to quit school 3 semesters in. As my earnings peaked out given my lack of a college education and the boredom of accounting set in, I decided to go back to school in 1997. (For those of you doing the math, I graduated in 2 1/2 years. I finished my general education credits at the community college while simultaneously working on the business degree at the university. I wouldn’t recommend back-to-back semesters of 36 credit hours (each school limited students to 18 hours), but it did get me to where I wanted to be.)

Anyway, in my one and only finance class I took in my first college stint in 1993, I heard what I’d learned in high school economics — the role of a corporation was to maximize value for all STAKEHOLDERS. The stakeholders in a corporation were defined as shareholders, employees, suppliers, and the community it resides in. When I got back to school in 1997 somehow the role of the corporation had shifted to maximizing the value for SHAREHOLDERS. Employees, suppliers, and the community were afterthoughts. I spoke to several of my finance professors about this and had many long arguments about the long-term effects this would have on society overall. Obviously during the 1990s when seemingly everyone was getting rich thanks to the rising stock market, this was not a big deal.

Well it is now. I cannot say enough times I am not promoting socialism, but merely warning about what this focus only on shareholders is doing to our country. Even the CFA study materials understands this. I’m not sure why the academics that trained the CEOs and CFOs of today cannot grasp this concept.

“It should be clear that the share of profits in GDP cannot rise forever. At some point, stagnant labor income would make workers unwilling to work and would also undermine demand, making further profit growth unsustainable. Thus, in the long run, real corporate earnings growth cannot exceed the growth rate of potential GDP.

This plays right into the Social Cycle I’ve discussed on and off for the last 15 years. If more corporations do not wake up and start focusing on their STAKEHOLDERS the “workers” will revolt. The stock market has been rallying nearly non-stop with President Trump’s “business first” agenda, but he seems to have forgotten the people that elected him are those middle class workers that have tread water now for 20 years. As we learned two years ago, the populist movement can swing dramatically in other directions.

I truly hope it is not too late because I fear what will happen to our economy and the stock market should American workers and voters decide they’ve had enough and want to force corporations to give back more.

About Jeff Hybiak, CFA
New Kent, VA
Jeff joined SEM in October 1998. Outside of SEM, Jeff is part of the worship team at LifePointe Christian Church where he plays the keyboard and bass guitar. He also coaches a club soccer team.
Previous Post : Hurricanes & Our Investments - Ask the Expert Radio Show   Next Post : Client Portfolio Update