Why debt is a problem

It’s not like it is a new phenomenon. With the exception of a brief period in the late 1990s every year of my life has seen Americans go deeper into debt. From the federal government, to state & local governments, to corporations, to individual Americans, debt has been used to increase our “quality” of life. Last week I highlighted the serious concerns I have for the investment grade bond market. I included the staggering amount of money the federal government and corporations are going to have to borrow over the next few years to avoid a serious financial crisis. This week I want to turn my attention to those that all of this debt will hurt the most — younger Americans.

An article in Bloomberg this week discussed the sad milestone debt levels have hit for younger Americans (classified as 19 to 29 year olds.) It was reported this week that this age group now has $1 Trillion of debt, hitting the level the same group (now in the older age bracket) hit at the very peak of the housing crisis. 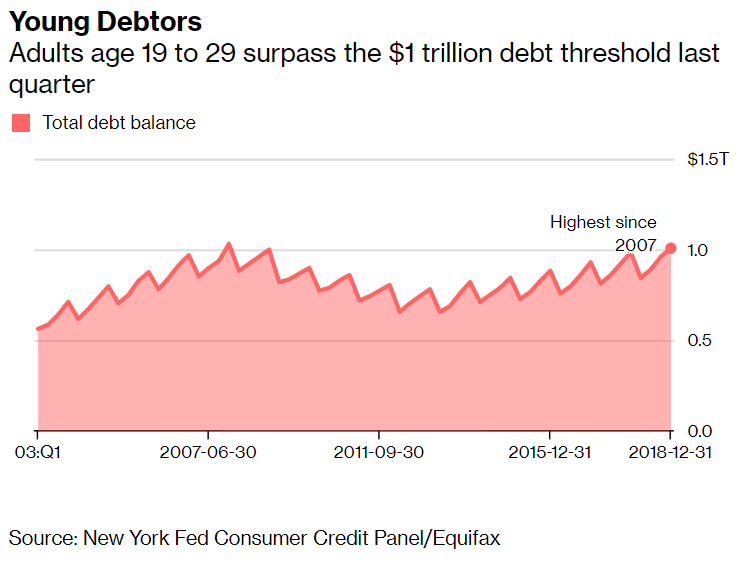 Unlike their older peers, the current group of young Americans is saddled with no collateral backing it. In 2007 the majority of the debt was backed by housing. Even with the large hit to prices at least there was SOMETHING that could be sold (or lived in). For far too many Americans saddled with student loan debt either didn’t finish college or have degrees with little hope of providing the income needed to pay back the loans. This is setting back their generation years if not decades in moving towards financial independence.

It is also going to cause a long-term drag on the economy as household formation and spending patters are stunted. Fewer people buying homes, means less economic activity. 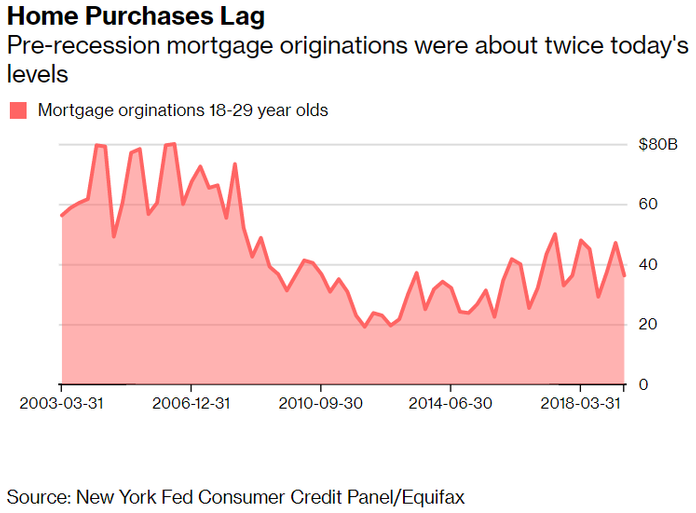 The Millennial generation outnumbers the retired or nearly retired Babyboomer generation by a wide margin. Unfortunately, the drag of student loan debt along with lackluster economic growth, and jobs that do not align with their skill set, Millennials will not be able to support their Boomer parents economically in a way that will allow the Boomers to enjoy the retirements they were planning on.

All the economic models assumed Millennials would follow the same earning and spending patterns of their parents. They assumed the economy would truck along at a 3.1% annual rate. The models assumed inflation would remain low and advances in technology would keep medical costs low. None of those things have happened and now we have a large group of retired or nearly-retired Americans still running Congress and still outnumbering the other two generations in voter turn-out trying to decide what to do.

Ok, the next section is probably going to offend people. It is not meant to. It is not a political statement. I’m not a Democrat or a Republican. I’m an American. I follow the numbers and let the data (and my study of history) to be my guide.

I can already see the strategy to buy voters in 2020 paying off. The far left has decided they will promise Social Security EXPANSION. They plan on taxing the “rich” as well as hiking taxes for those not yet retired. This is reminiscent of the lat time anything was done with Social Security — doubling the FICA tax in the early 1980s. This hurt Generation X more than any other generation as they’ve paid more as a percentage of their income than any other generation. It now looks like they will pay even more before they can hit retirement age. The Millennials already saddled with $1 Trillion of debt will find it even harder to save as more of their paychecks will go to support those already retired.

The other end of the far left strategy will be proposals to pay off student loan debt. I’m not sure how they will pay for this (probably via the “rich”) or what they will do about the people that partied for 4 years with no degree to show for it being rewarded instead of those who worked full-time to earn a degree, but the “how” doesn’t matter. If they can promise to provide benefits to the two largest generations without anybody providing any evidence that this will not work over the long-run, we may be running our own Socialist experiment in just a few years.

I don’t know the way out of this. Socialism works until you run out of other people’s money. No matter how much they tax the “rich” there won’t be enough to pay for their schemes. This means having to borrow money from other people at the same time most developed countries are facing the exact same (but bigger) demographic challenges. Sooner or later it’s going to break and we will have a MAJOR financial crisis on our hands.

My study of American market, social, and economic history tells me we won’t have a valid solution until we see the crisis. For our investments that means staying nimble and doing everything possible to conserve capital. There will be tremendous generational buying opportunities on the other side for those that survive what is sure to be an ugly realization that we cannot borrow increasing amounts of money forever.

About Jeff Hybiak, CFA
New Kent, VA
Jeff joined SEM in October 1998. Outside of SEM, Jeff is part of the worship team at LifePointe Christian Church where he plays the keyboard and bass guitar. He also coaches a club soccer team.
Previous Post : A Business Major’s take on SEM’s recent blogs   Next Post : Fixing a broken RSS reader in SharePoint Online