The stock market is again on shaky ground as the Trump Administration is escalating the potential for a heated trade war with China. They announced the initial shots in March, which was matched by China with their own tariffs (even though China already charges heavy tariffs on US goods). Wall Street is again hitting the airwaves to warn about the dire consequences of a trade war. While short-term they are correct, the question is whether or not this is necessary for the future of our country.

For years I’ve talked about why the Fed’s models and other economic theories have seemingly stopped working. We’ve gone through the worst economic recovery in the history of our country where GDP growth only surpassed the long-term average a couple of quarters. The reason is simple — the US economy is not a closed system. We are spending far more than we make and we are importing far more than we export. We have essentially borrowed money from others to finance our lifestyle and willingly allowed cheap foreign products to be sold in our country.

I’m not advocating closed borders and mass protectionist policies, but we all need to remember the entire platform Donald Trump was elected on. Wall Street loved the idea of slashing regulations and massive tax cuts, but forgot the fact wages in the US when adjusted for inflation have been essentially stagnant for 20+ years. One critical reason behind this is our trade deficit. The higher paying manufacturing jobs have been replaced by low paying service jobs. The middle class had enough and they elected the only candidate willing to stand up and demand “fair trade”.

Looking at the Current Account Balance for several countries we can see it is not just China contributing to our deficit. [The Current Account Balance is the net of all payments received and sent to other countries for their products. A negative balance shows the net outflows.] Japan for years was allowed to import cheap products to the US at the expense of our workers. As the chart shows, Japan (the purple line) had a strong correlation to the US’s trade imbalance. Germany (the green dashed line) has enjoyed their own surplus. Keep this in mind the next time their is another EU debt crisis — Germany has gotten wealthy at the expense of all the EU countries that buy their products. 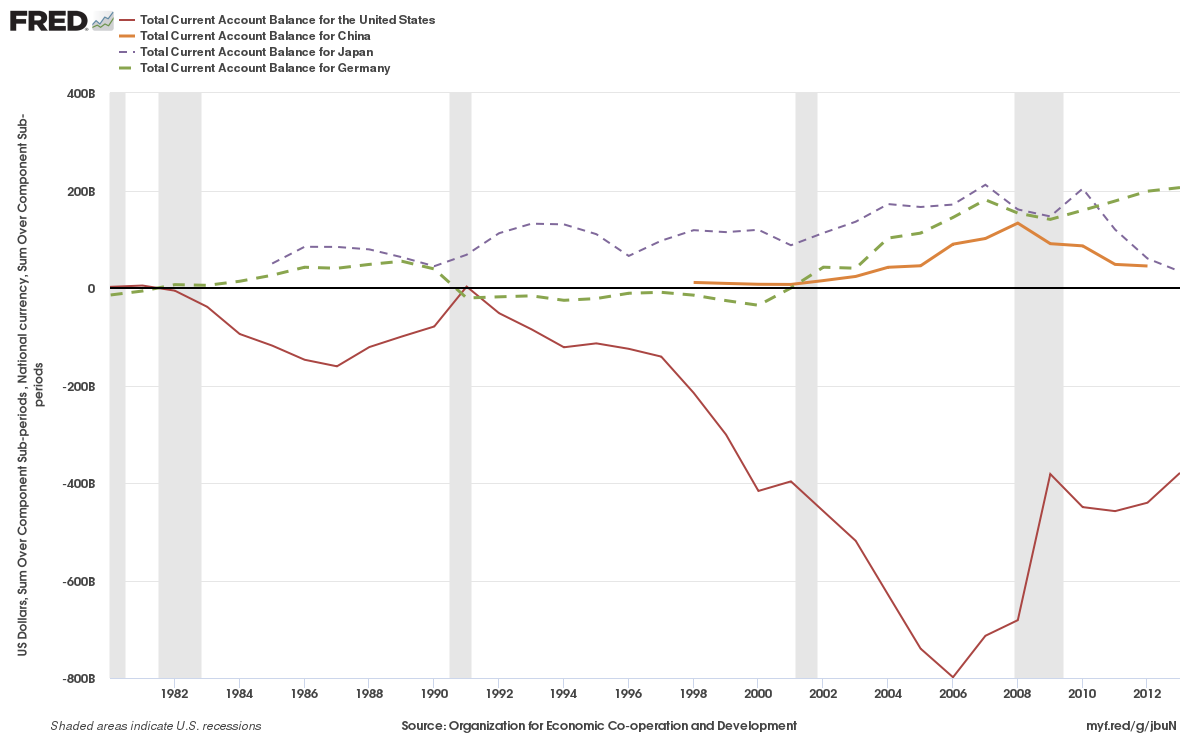 Clearly, China is the primary culprit for the US trade balance and as the President said a few months ago when the tariffs were announced, “fair trade means equal trade. If China has a tariff of 25% on certain products, the US will do the same.” This snapshot from USDebtClock.org shows the problem — China represents 47% of the US trade deficit. If we continue down the present route, where does it end? Yes it is bad for stocks over the short-term, but over the long-term Wall Street should demand the US gain a stronger footing in global trade.

The problem is much bigger than trade. For the last decade I’ve discussed the social cycle. The election of Donald Trump along with the emerging interest in politics by the younger generations is part of the “crisis” stage. They are tired of short-term measures that ease any pain while making the long-term situation much more dire. Just yesterday Congress passed another “can-kicking” budget to spend $1.3 Trillion of money that will not be paid for. The bill had candy for both sides to gain wide-spread approval.

This spring one of our 11-year old twins came home and said, “did you know the US has over $21 Trillion in debt?” I asked how he knew this and he said his teacher pointed that out when one of the kids said something about how “rich” the US was. This 25-year old teacher pointed to this statistic and asked, “are you really rich when you are borrowing money to buy stuff? Remember somebody has to pay it back and it’s going to be you and me.”

To take the lesson further, we showed our twins USDebtClock.org. This is something I did about 8 years ago with one of their older brothers when he came home talking about the deficit. Let’s look at just the top portion. 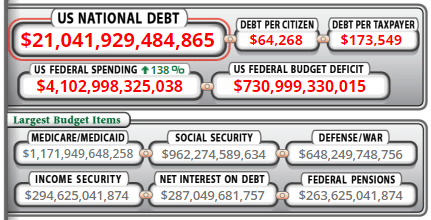 The debt per citizen is staggering by itself. The Republican ideas are centered around cutting taxes and eliminating “wasteful” spending. Five of the 6 largest budget categories are “sacred cows” neither party will dare cut. The other is the interest on our debt, which is continuing to grow. Those top 6 categories add to $3.6 Trillion, or 88% of the TOTAL spending of our country. Notice the budget deficit is currently $730 Billion (growing to over $1 Trillion by 2020 under current budget projections, which include a “boost” from tax cuts). We could cut every single other category and would still have a budget deficit of $256 Billion. The last time the budget deficit was that low was in 2007.

Put another way — it is mathematically impossible to do anything about the deficit unless people are willing to cut spending in those 5 categories, the largest of which are social security & medicare. Most Americans believe the money withheld from their paychecks is locked away in a fund waiting for them. Since the 1970s Congress has spent that money and filled the trust funds with IOUs. This helped to keep budget deficits low, but now that the Babyboom generation is retiring the funds are taking in significantly less than they are paying out, so they become current budget items that have to be paid out of the general fund. Even had they left the money alone, the government has done little to change the structure of the benefits over the last 40 years. People are living significantly longer and the cost of health care has sky-rocketed. This leaves most people 60 and over receiving 3-4 times what was paid into the plan over their working careers.

Here’s the problem and why younger generations will continue to voice concerns over the deficit. The median household income is currently $59,039. For somebody working 40 years and adjusting for 3% inflation it would take payments of $40,000 per year to payoff their portion of the deficit. Put another way, if we taxed every American taxpayer at a 68% rate we could pay off the deficit —— if the government ran a balanced budget from now until 2058. This of course would not leave those workers any money to pay into their own social security or medicare fund, let alone a retirement fund for themselves.

Our trade deficit is a symptom of a much larger problem, one that cannot be solved with the policies that please Wall Street or bills that get widespread support from both sides. The solutions will be difficult & painful. The only way for them to work will be if the majority of Americans understand the problem. The longer it takes the more painful the solutions will be.

About Jeff Hybiak, CFA
New Kent, VA
Jeff joined SEM in October 1998. Outside of SEM, Jeff is part of the worship team at LifePointe Christian Church where he plays the keyboard and bass guitar. He also coaches a club soccer team.
Previous Post : Trade Wars   Next Post : The Impact of Interest Rate Increases