At best, they can re-inflate the bubble

This week the Federal Reserve gave every indication they are ready to cut interest rates as soon as July to fight a slowdown in economic growth (or at least that’s how the stock market participants took it.) Despite the celebration there are really only two outcomes for the market and economy based on economic fundamentals, logic, and history:

Remember, it takes 9-12 months for one change in rates to cycle through the economy. This means we still have 3-6 months of overhang from the December 2018 interest rate hike. More importantly, the more the Fed cuts rates now, the fewer tools they will have to fight an actual recession. With rates already low the impact of a change in rates is much smaller. The more the Fed cuts now, the worse it will be when the economy is actually near a recession.

Nobody is bothering to ask, but why is nobody at the Federal Reserve concerned that despite their unprecedented measures the past 12 years they haven’t been able to come close to sparking inflation. I’ve been talking about this for over a decade. Our economy is broken. Using the same monetary tools to generate stock market growth with the hopes it trickles down to economic growth for the 80% of Americans that do not have a meaningful investment in the market simply doesn’t work. For more check out some articles in our archives (found on the Most Popular tab at the top.)

I think this is the most important chart to understand. In pretty much every recession (including the last 3), the Fed has been cutting rates BEFORE the recession started & continued to cut rates during the recession. Eventually it worked, but not before investors lost 30-50% of their investment value in the stock market. 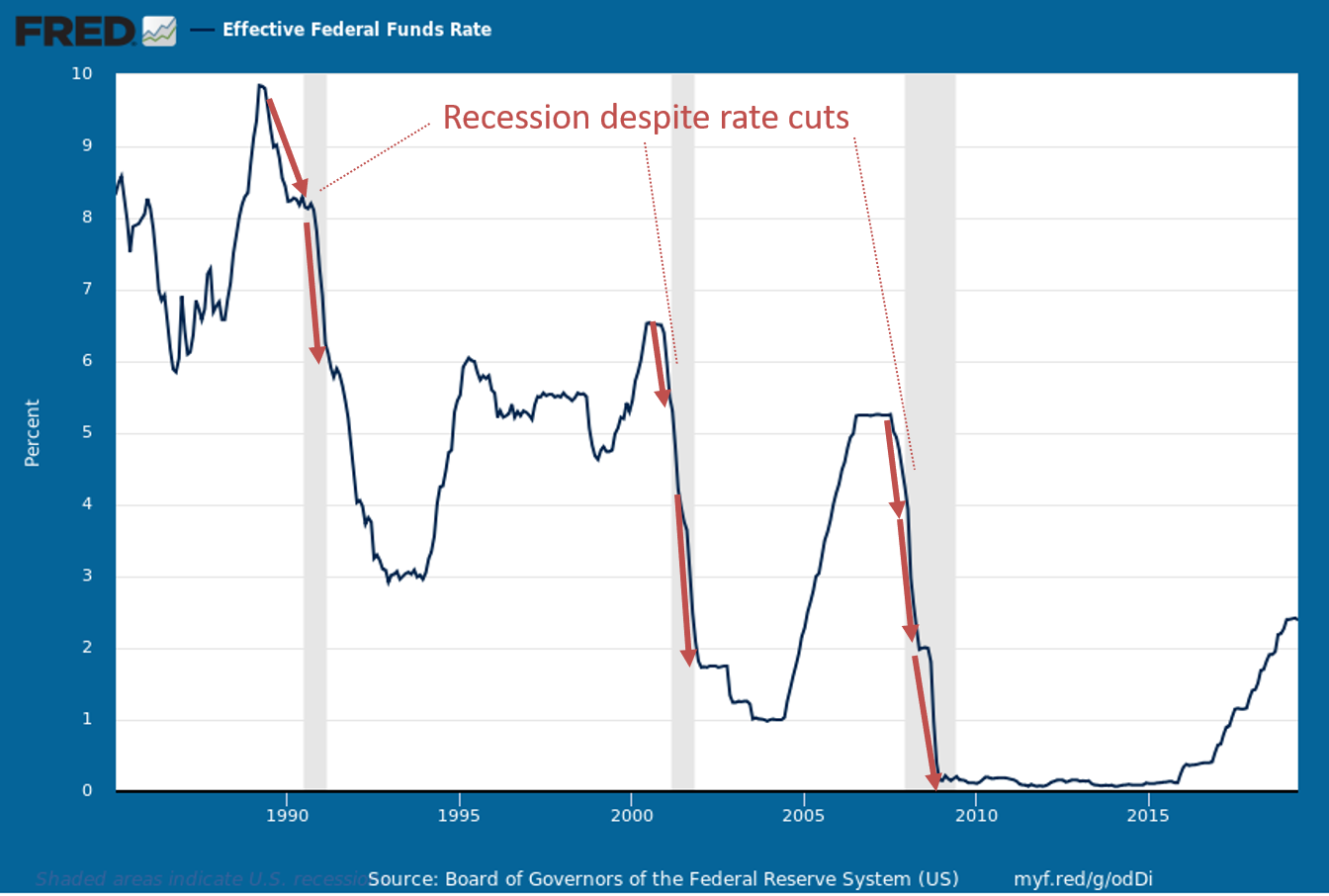 With stocks near all-time highs, the Fed is in a tough spot. They can continue to hope propping up the market will spark stronger economic growth or they can “keep some powder dry” and watch stocks crumble, causing sentiment (and the President) to cascade down on them.

At best, we have a 1995 scenario where the Fed stepped in to cut rates after hiking them “too much” in 1994. This led to the massive technology bubble which eventually burst (despite the Fed’s attempt to cut rates after it was already too late.) I think it’s ironic the only time valuations have been higher was in 2000. I’m not sure what the Fed is trying to do, but the data, logic, a study of history, and my experience are all screaming WATCH OUT!

For investors using SEM’s models, we don’t have to anticipate which scenario will play out over the next few months and years. We are completely flexible and will let the data speak for itself. If the Fed re-inflates the stock and bond bubble, great! We are already fully invested in high yield bonds, which will thrive in an environment where the Fed is once again cutting rates…………….until it is realized they cannot stop a recession and a large chunk of those high yield bonds will default. It won’t be just high yield bonds, but also many ‘investment grade’ bonds which will default (for more see “Investment Grade Junk“). Our “dynamic” models are “bearish” due to our economic model, but have been having a good year. Our “strategic” AmeriGuard models will also be able to participate if the bubble continues (as they are designed.)

Interestingly enough, both our Dynamic Income Allocation (DIA) & Tactical Bond (TB) models had great days yesterday. DIA is “bearish” and heavily invested in long-term Treasury Bonds while TB is “bullish” and fully invested in high yield bonds. This won’t always be the case, but the market’s reaction seemed to be “buy everything”, the Fed has our back. I’m not sure if that was the reaction the Fed was looking for.

Listening to the press conference with the Federal Reserve Chairman I can’t help but be thankful for our 100% quantitative approach. There were so many “we think” comments along with a “we will adjust as things change” comments that it became apparent how dangerous it is to make decisions in a subjective, committee based environment. And so many investors and advisors alike are putting all of their faith in the Federal Reserve to actually prevent a recession or a bear market!

The most important thing for you is to block out all the short-term noise and focus on your financial plan and cash flow strategy. SEM’s specialty is taking those two things and finding investment allocations that fit both of them along with your investment personality.