The S&P 500 went 42 days without a move of 1% in either direction and 51 without a 1% or larger drop, Friday brought the largest loss for stocks since the Brexit vote in June.  Ironically that drop ended a 54 day streak without a 1% drop.  Market participants had gotten complacent, which usually means stocks are due for a major drop.

During our Friday Podcast (click here to listen) I went through the causes of the drop on Friday.  Here are a few of my notes:

In the whole scheme of things this was just a minor accident.  The market essentially gave back the gains of the past 40 days, which given the painfully slow, low volume way those gains were generated, it’s not that bad.  The S&P 500 is back to the break-out point as well as the uptrend line, which could be a better launching point for a fall rally. 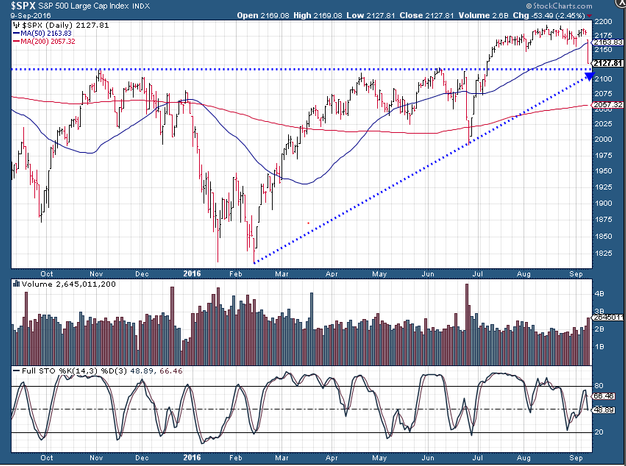 The analogy I used last week compared the Fed’s indecision to following a driver that is constantly swerving between lanes.  This can be very dangerous and often causes accidents if the other drivers around them are too aggressive.  While not much technical damage was done yet, this could turn into a larger scale chain reaction that causes significantly more damage.  [Remember last week’s Chart of the Week & Weekend Reading post discussed why I believe we are in a market bubble, the emotions behind the bubble, and the consequences of them] Only time will tell, but we are closely monitoring our trading systems for indications we need to slow down, change lanes, or even get completely off the freeway.

Volatility has returned to the market.  As expected, the markets reversed Friday’s move and bounced off the support levels mentioned yesterday.  The catalyst was clearly a “dovish” speech by Fed Governor Brainard.  As one Bloomberg columnist wondered:

“When did she feel that we, or more importantly her colleagues, needed to be reminded that the economy, or financial conditions, had suddenly caught pneumonia? It does make one ponder: what was the balance of risk that changed the outlook?”

In addition to a timely pneumonia analogy, the author, a former FX trader highlights the frustration the market participants have with the Fed’s “open communication” policy.  Dr. Bernanke’s theory was this would create a more certain reaction from the financial markets.  Instead we are stuck with this laser focus on every word out of the Fed.  Thankfully, the Fed is supposed to be in a quiet period from now until their meeting concludes a week from tomorrow.

So what are we to do?  In the shorter-term we are stuck with some fluctuations that will lead to frustration.  Over the more intermediate to longer-term we must remember we still have a free market.  We’ve seen diminishing returns from Fed policies and are closer to that point where a “Forest Fire” erupts that the Fed and other central bankers will not be able to control before serious damage is done.

In my list of catalysts for the Friday sell-off I mentioned some bearish comments from Doubleline’s Jeffrey Gundlach.  He returned from a 1 month sabbatical and followed up his July “sell everything” presentation with more details of what he sees developing in the investment markets.  Remember, Mr. Gundlach is primarily a fixed income manager, meaning he must understand the underlying fundamentals behind the income sources.  While a “relative value” approach commonly used with stocks (such as stocks are yielding more than bonds) may be deployed at times, in fixed income the fundamentals always end up mattering.

I saw yet another article yesterday that discussed Mr. Gundlach’s presentation, but it was the first that discussed the Q&A portion.  One of the questions was what advisors and investors should be doing to prepare for what he believes will be a very difficult and costly environment in the months and years ahead.

Get more defensive,” he said.  “Stay defensive on interest rate risk and ideally maintain a lower duration than the Barclays AGG, which is 5.5. ” He said investors should shift from index or aggregate bond funds to lower duration funds and less risky assets broadly.  And, he said, move a little bit more to cash.

I found this advice interesting as it is exactly what our Dynamic Income Allocation (DIA) program does.  It was “bullish” on interest rates for the better part of 2016.  On August 31 a “reduce duration” signal was generated, which put us at a “neutral” point.  Watching the indicators now, we could easily be exactly where Mr. Gundlach advises — below the benchmark duration — by the end of the month.  In addition, both Tactical Bond and Income Allocator could quickly reduce duration by selling high yield & emerging market bonds and investing in short duration or money market funds.

This strategy may not be “sexy” or have generated the “higher returns” so many clients seem to be demanding, but trust me when I say they will not be sorry if Mr. Gundlach again is right on the market direction.

Stocks are making anybody hoping for more volatility happy.  We saw 42 days without a 1% move in either direction.  The past 3 days we’ve seen the S&P 500 move by more than 1% (down, up, & down again).

A few weeks back we mentioned the record net short positions in the Volatility Index (betting Volatility would decrease) as a concern of mine.  At the same time we saw record speculative bets on the Dow and the highest speculative bets on the S&P of the past 3 years.  One derivative based strategy was to sell Volatility to fund the purchase of stock futures.  This was a nice way to earn some yield without committing capital in a slowly rising market like we saw this summer.

Unfortunately, when Volatility returns it is often due to a sell-off in stocks, creating losses on both sides of that “easy” trade.  Remember, nothing fundamentally has changed with the market to cause this sell-off.  We just need to watch closely for collateral damage as these derivative based strategies are unwound.

The markets are calming down a bit, giving market participants a chance to assess their positions.  Unfortunately, this doesn’t mean they will be looking at the underlying fundamentals, but rather what the Fed is likely to do.  Rick & I have also spent quite a bit of time reviewing all of our various trading systems inside our programs.  While the only signal generated thus far was Friday’s buy on the lows in our Volatility System, several of our systems are quite close to making major adjustments for the first time since late winter.

As we discussed the likely outcome of the Fed meeting on our systems, here is what I said:

Based on the economic data and the Fed’s history under Yellen, I’d be shocked if the Fed raised rates, although there is a (very, very) small chance she might enforce the rhetoric that they will be “normalizing” rates.

Fed makes it clear rate hikes are off the table the rest of the year due to “volatility”.

[Everybody wins — except savers and retirees dependent on fixed income that aren’t invested with SEM.]

Fed shocks markets and raises rates (or less of a shock, doesn’t raise rates, but indicates they still are likely to raise this year).

[Everybody that has been chasing returns lose & we again see a rash of emotional selling, locking in those losses.]

I’m not good at making odds, especially given the Fed isn’t truly data dependent or running off of any sort of rules other than their own opinions.  I’d lean towards the first scenario over the second, in which case our systems will likely want to possibly add a position in the long bond & maintain as much of our HYB exposure as possible.  The downside of course could wipe out a lot of gains rather quickly, so we’ll have to watch very closely for the sell signals and be ready to act on Wednesday (the day the Fed meeting concludes).

So much for calming down ahead of the Fed meeting.  A relatively quiet day for stocks swelled into a nice gain by the close.  There was seemingly no news to drive prices higher.  Yesterday was the 4th day out of the last 5 that saw the S&P 500 move more than 1% in either direction.

Yesterday I lined out the potential upside and downside scenarios.  Despite seeing the odds of a rate hike in September plummet (18% as of this morning), it seems Goldman Sachs is betting on the downside scenario.  In two separate notes yesterday they downgraded both stocks and bonds (similar to Gundlach’s “sell everything” call.)

On the bond side, they see rates moving towards 2% on the 10 year Treasury by year end.  On the stock side, Goldman believes the high valuations, political headwinds, uncertainty towards the Fed’s rate hike, a stronger dollar (pressuring earnings of US multi-nationals) and weaker economic data will lead to lower stock prices.

We haven’t had any new signals just yet, but we are extremely close to seeing our allocations reduced significantly in all of our tactical programs.  As always, you can see click on our Current Allocations page for our latest positions.

Check back tomorrow for additional updates.

About Jeff Hybiak, CFA
New Kent, VA
Jeff joined SEM in October 1998. Outside of SEM, Jeff is part of the worship team at LifePointe Christian Church where he plays the keyboard and bass guitar. He also coaches a club soccer team.
Previous Post : Still the most attractive bond   Next Post : Bubbles &amp; Our Emotions