Not as safe as you think

During the 2008-09 Financial Crisis, too many investors learned bonds are not as safe as you might think. Unfortunately, I am seeing a large number of people believing a financial crisis will not happen again in their lifetimes. Some believe everyone learned their lesson from the last crisis, while others believe the central banks and governments will not allow a crisis to occur again. Too many others are looking for the exact same symptoms we saw in the last crisis before they become concerned. 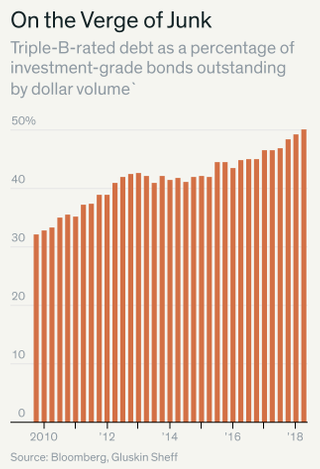 The stability of the markets has lulled nearly everyone into a false sense of security. To many investors, the term “investment-grade bond” sounds like a nice, safe investment. This category is supposed to represent the most stable of all corporate bond issues. However, a combination of factors has led this “safe” bond category to become a ticking time-bomb that could be the beginning of the next financial crisis. An “investment grade” bond is a bond rated anywhere from AAA all the way down to BBB. The next step down from BBB, BB is classified as “junk”. This designation is important.

The largest holders of Investment Grade (IG) bonds are pension funds, insurance companies, banks, and other financial entities that are REQUIRED to hold only IG bonds in their portfolios. These entities cannot afford to take the risks involved in owning non-IG bonds and are REQUIRED to sell any holdings that fall below BBB. This week’s charts of the week show the problem —- BBB bonds now represent half of the IG bond market and the overall net leverage ratio of these bonds is significantly higher than it was before the last financial crisis started.

A small bump in the road (such as a recession caused by the Fed raising interest rates too far — something they ALWAYS do) means many of these BBB bonds will be downgraded to BB or worse. This means the largest holders of these bonds will be forced to sell. This will put more downward pressure on these bonds and the collateral damage could cause A rated bonds to fall to BBB or even lower. It is anybody’s guess how far the IG prices will fall to find an equilibrium. After 10 years of unprecedented stimulus from the central banks and Congress, the only thing I know is the true interest rates on these bonds should be much higher if determined by the free market.

Our economic model is not showing an imminent risk of recession, but we have seen a few indicators that are warning sometime next year we could be facing a recession. By then it will be too late to make adjustments, so now is the time to be prepared. We all need to look past the hype of all-time highs and the longest running bull market in our history and ask, “what could go wrong?” If we are honest, there are a lot of things that could turn things against this market. At that point, far too many people will realize “investment grade bonds” are not as safe as they think.

-“Where the Bond Market’s Next Big Problem Could Start“; Barron’s

About Jeff Hybiak, CFA
New Kent, VA
Jeff joined SEM in October 1998. Outside of SEM, Jeff is part of the worship team at LifePointe Christian Church where he plays the keyboard and bass guitar. He also coaches a club soccer team.
Previous Post : It always matters   Next Post : Back to the highs.....now what?