Back in 1997, while I was still in college I read a study from the Federal Reserve Bank of New York titled, “The Yield Curve as a Predictor of US Recessions.”  This was in the early days of the development of my economic model, so I studied this piece of research with great interest. Over the years the Fed has updated their research and the formulas they use to calculate the probability of recession based on the yield curve, but the overall conclusion has remained the same — the shape of the yield curve is a great predictor of the probability of recession.

For those unfamiliar with the yield curve, it is the difference in interest rates for Treasury Bonds over various time horizons. A “normal” yield curve would have long-term rates significantly higher than short-term rates. This is due to the longer-term risks of re-payment along with protection from erosion of spending power via inflation. The reason the yield curve is such a great predictor of the probability of recessions is it is set by the free market. Bond investors are laser focused on the ability of borrowers to repay their debts. Therefore, if they have concerns the economy may be slowing the free market will demand higher shorter-term rates from borrowers, so you will see a shift up in those rates to compensate for that risk, with minimal impact on longer-term rates. In fact, during a recession you’ll often see long-term rates on Treasury Bonds decline as bond and stock investors alike look for the safety of lending money to the US government over the long-term.

Due to the predictive power of the yield curve, the aging economic recovery, and a stock market that is significantly overvalued a lot of people have been paying attention to the yield curve lately…….as they should be.  In the past year we have seen the yield curve flatten significantly, meaning bond investors are growing concerned about the growth of the economy over the next few years and thus the ability of a massively leveraged financial system to refinance their debt that will be coming due. At the same time we’ve seen all kinds of market cheerleaders, including some Federal Reserve members telling us the yield curve doesn’t matter this time. One of the most often used reasons to back this claim up is the “unprecedented stimulus” by the Federal Reserve and other global central banks around the world. While I completely agree that has skewed many things, we should actually be seeing long-term rates moving up as the central banks begin unwinding their long-term bond purchases. What the Fed and anybody else is forgetting is the fact the FREE MARKET sets all rates beyond the short-term Federal Funds rate.

Ignoring all the noise, there is certainly cause for concern. I’ve found the spread between the 10-year Treasury bond and the 2-year Treasury bond to be the best portion of the yield curve in predicting recessions. It is heading lower rapidly as this week’s Chart of the Week highlights. One thing you will notice is how early the spread turns negative ahead of the recession. It has turned negative ahead of all 5 recessions. The average lead time is 17 to 21 months between the first month it turned negative and the start of the recession. While it has not yet inverted, it is getting precariously close to that level. 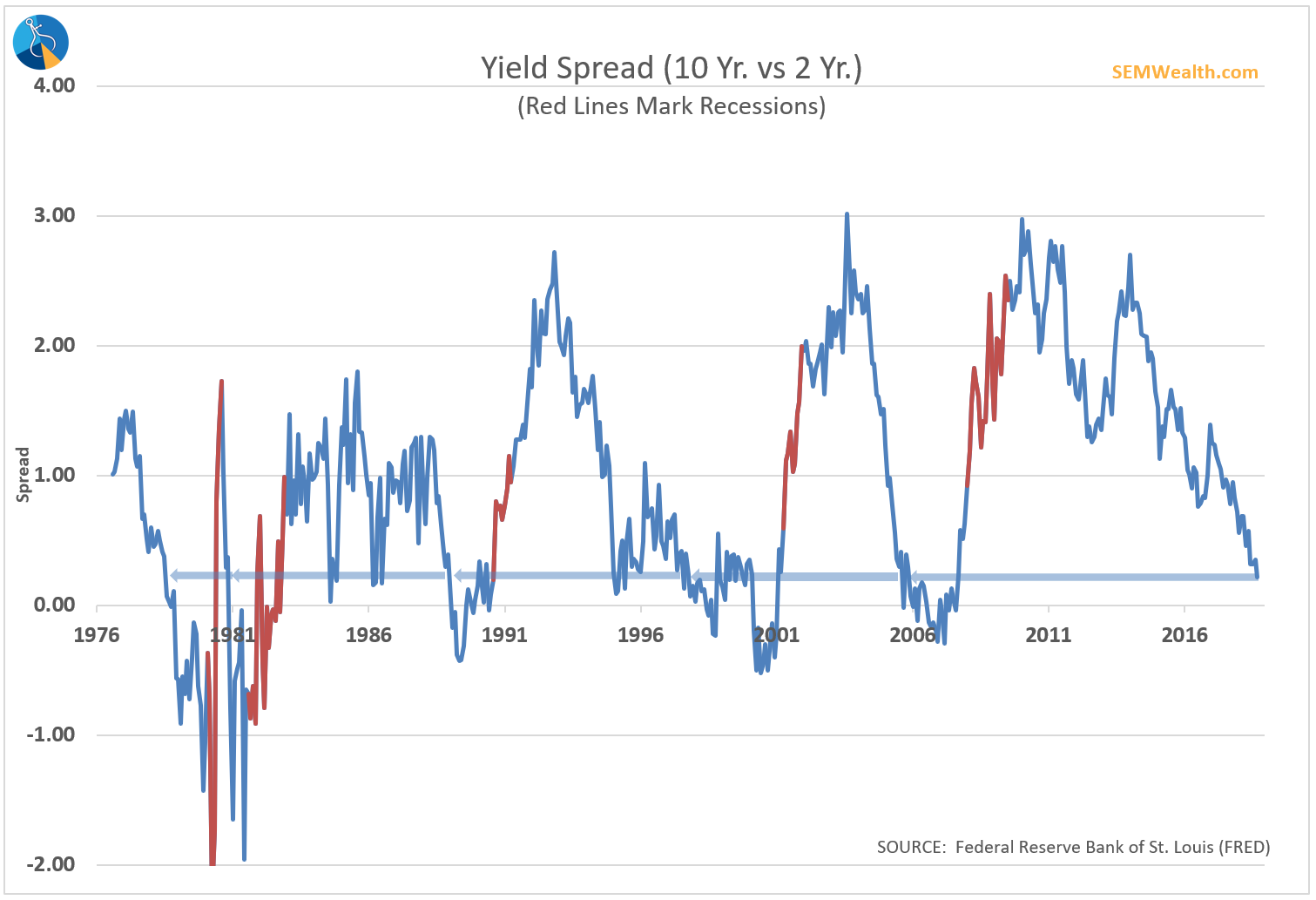 [Side note: The blip into negative territory in 1998 was at the time Long-term Capital was imploding and the Federal Reserve stepped in to save the Wall Street banks who had too much exposure. They of course attempted to do this again in 2000 and 2008, but learned when the market needs a recession a recession will happen. For more see “The Pending Forest Fire.”]

Here’s why it always matters — banks and other lenders “borrow short” and “lend long”. In other words, they fund their activities at short-term rates via savings accounts, money market rates, CDs, and other vehicles to attract money to their institution. They then lend money at the longer-term rates. As the spread gets tighter and eventually goes negative, they have no incentive to lend money. This in turn sends a signal to the rest of the market that something is awry and the “risk premium” for other assets such as stocks goes up (and values go down). In addition, the drop in lending sends ripples through the economy, eventually leading to a recession. The Fed may attempt to stop this by lowering short-term rates, but it has always been far too little and far too late.

I do not see anything in the DATA that says this time will be any different. In fact, the hair on the back of my neck goes up whenever I hear somebody from a big firm and especially the Fed say “it’s different this time.” I’ve learned in my 20 years with SEM and all the studying I’ve done of market history that it’s never different this time and the more people that say it is the more afraid we should all be…………especially when it comes from the group the market is trusting to prevent another bear market.

Lucky for all of you that have found this blog — I will post whatever the DATA is telling us. Our economic model has stood the test of time and has a strong track record of giving us fair warning about a coming recession. Remember, the stock market loses on average between 35 to 50% just before and during a recession, so its something we all need to be watching closely.

About Jeff Hybiak, CFA
New Kent, VA
Jeff joined SEM in October 1998. Outside of SEM, Jeff is part of the worship team at LifePointe Christian Church where he plays the keyboard and bass guitar. He also coaches a club soccer team.
Previous Post : Client Portfolio Update   Next Post : Not as safe as you think