All year I’ve said the economy is looking decent (not heading into a recession….yet) with two major possible events changing that view — the outcome of the election & the decisions made by the Federal Reserve. It seems we’ve been on a “pace lap” just waiting for the real action to start.

On Friday we saw two big pieces of news that made market participants grow concerned this outlook may change.  (Click here for our Podcast discussing those two items.) This week the Fed holds their monetary policy meeting. While nobody expects the Fed to do anything, their statement following the meeting could move markets, especially after the “surprisingly strong” GDP report (click here for my take on the report). Friday’s October Payrolls Report may also shape the market participants’ views on the Fed’s next move.

We’ve had quite a few clients asking us if they could move to cash ahead of the election. While that is certainly allowed given our management agreement with them we do note the markets often move in a way that does not make sense. Market participants are getting nervous as it is and our systems are migrating towards a more cautious stance. In particular, EGA had several systems reduce our allocation last week (partially offset by some short-term buy signals into Friday’s sell-off.)

In my experience speculating on the outcome of an unknown event is usually an exercise that involves a lot of guesswork and a great deal of luck to make the right decisions. Having a mechanical way to navigate the markets has served us well the past 25 years and we expect it to do the same regardless of the outcome of the election.

Stocks continued their pace lap on Monday. With the November economic data starting to pour in this morning with the ISM Manufacturing surveys along with a surprising jump in the polls by Donald Trump, market participants will have a lot to consider as it looks to break a 5-day losing streak.

It’s rare, but sometimes race cars crash on the pace lap. Somebody might lose focus, get distracted, or simply push it too far as they warm up their cars. That seemed to be the case yesterday as the reality set in that we could see a President Trump. The mainstream media went into full panic mode with Bloomberg and CNBC releasing the full assault of experts and analysts telling us why that would be a horrific prospect. Just as nobody knows for sure who will win the election, nobody knows with certainty how the economy might respond to a Trump presidency. Chances are his “bluster” is just an act as is Hillary’s “progressiveness”.

As it is, the sell-off yesterday did break the “line in the sand” I’d drawn a few weeks back around 2120, but the break below 2100 brought out some bargain hunters. We have the Fed decision announcement today, which follows a disappointing ADP jobs report released this morning.  Stay tuned. 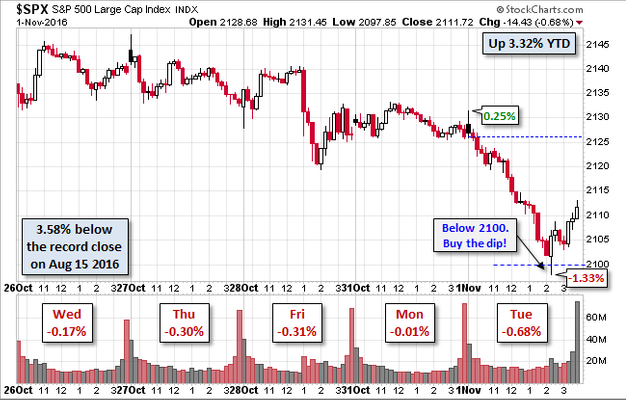 We did see some selling yesterday even in our “Dynamic” programs as they sense the increased risk.

The news of the day was of course the Fed meeting. Nobody expected the Fed to raise interest rates a week before the election, so the focus was on the “wording” in their statement. I was on an airplane when the news came out and through the magic of technology was watching CNBC as it happened. We were beginning our descent so had lost our internet connection, so I was stuck just watching what was happening. I could only shake my head at where we are at in our market that we would spend so much time worried about the removal of the word “roughly” or trying to read the minds of the Fed participants.

As I’ve told several clients that are small business owners worried about borrowing money to invest in new equipment after mentioning being worried about what the Fed may or may not do with interest rates — if the investment makes sense now, a shift in rates of 0.25% should do NOTHING to change that. What I would be worried about is the fact that the economy and market seems too unstable to handle this fraction of an increase in rates……after 7 years of “expansion”.

While the losses are nowhere near the last time this happened, it is telling that the last time the S&P 500 was negative 8 days in a row was back in 2008. You’d have to go back to 1980 to find a 9 day losing streak. Of course the issue this time is the YUUGE unknown surrounding the election.  The market is only down 3% over the 8 day losing streak and volume is somewhat tame. This seems to be more of an absence of buyers than anything else. That can change depending on today’s Payrolls report and of course the outcome of the election next week.

What I do think is telling is where the S&P 500 is sitting. It is now negative for the past year and at the same level it was at in December 2014 — when QE 3 ended. There are significant STRUCTURAL issues that need to be solved and sadly neither candidate that is likely to win the White House has the answers. In fact, they may make things even worse. 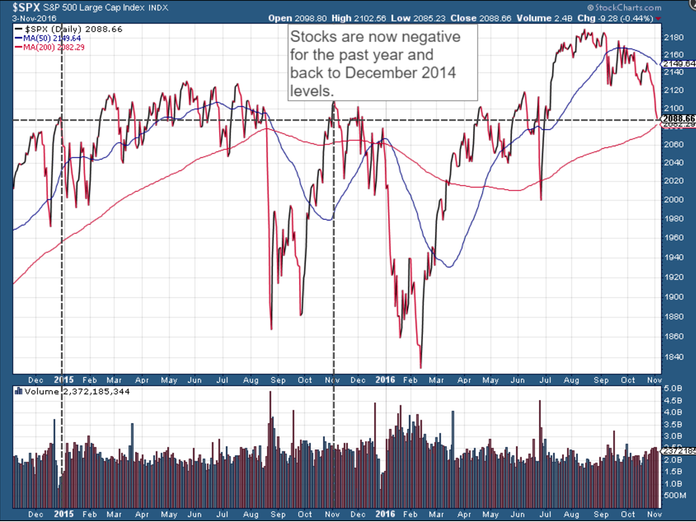 Be sure to check our Current Allocations page for the latest Trading Signals in each of our programs.

About Jeff Hybiak, CFA
New Kent, VA
Jeff joined SEM in October 1998. Outside of SEM, Jeff is part of the worship team at LifePointe Christian Church where he plays the keyboard and bass guitar. He also coaches a club soccer team.
Previous Post : Elections &amp; the Markets, Part 3   Next Post : About that GDP Growth