Uncertainty is not a friend of the market. Or most things really. Outside of the episode of your weekly TV drama at 8:55 PM you watch on Tuesday’s you probably would want to know what the future holds.  Uncertainty is risk and people typically don’t want risk.  So with this in mind, let’s look at the 72 year old elephant in the room.

On election night 2016, when the pollsters were banking on people’s fear of change and expected an easy Clinton victory, the uncertain Trump presidency led to a market sell-off of 5%.  Because after all, how could we really know what the Trump presidency would entail?  Well for almost 18 months the Trump presidency has meant rapid economic growth and unemployment seeping under 4%.  But he’s still Trump, and if you read into anything CNN is saying that isn’t a good thing.  Any drastic move made is viewed as Trump entering the risk fray that everyone expected 2 Novembers ago.  (Side note, isn’t it funny how often people taking in large rewards off the risks they took get slapped in the face when the risk resurfaces?  The whole risk/reward payoff works good when it’s all reward and no risk.)

That’s where the tariffs come in.  Tariffs are risky.  The president can’t just cut the strings keeping us and our global allies friends, right?  How could we have possibly seen this coming? 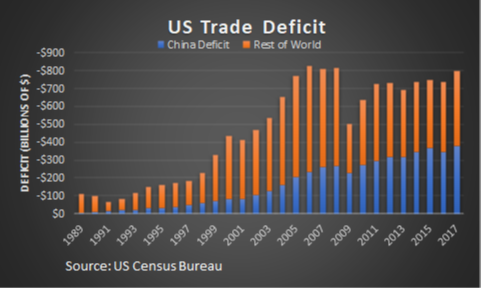 Well, the tariffs weren’t really a surprising action following Trump’s presidential campaign.  It came in the way of mentioning “fair trade.”  I know what you’re thinking, tariffing our allies isn’t fair trade!  Well, except for the fact that they’re tariffing us.  So in order to impose fair trade, either no sides get tariffed or both do.  But, if you were taking a fee from the world’s largest economy for taking their stuff, you probably won’t want to give that up so easily.  So the easiest course would be “counter tariffs” (which is funny because the president’s tariffs are actually the counter tariffs.)  And I guess once a counter counter tariff is imposed, it’s a war.  War is scary.  War is uncertain.  There are losers to war.  Why will Trump throw us in a position where we might lose?

It seems like there’s a great potential for a loss when essentially the whole world is threatening war with the US.  But, especially in our recent conflict with China, the opposing countries seem to have far more to lose than we do.  Now, there is expected to be losses.  Consumers are probably going to pay a price for this.  A price that seems to only be connected to a president who is playing Trade War Games because so many people believe he is temperamentally ill-prepared to be the leader of the free world.  But there is a very real reward should the US come out successful, fair trade.

The short term will hurt, yes.  You’re already seeing more volatility in the market (leading to a buy in EGA’s volatility system and a small sell from our TB high yield bond exposure.  Ameriguard has been as out of the market it can be throughout this quarter.)  But in this instance, the US is taking less risk for a much greater reward than Canada, Europe and China are.  That’s a trade I’d definitely make (which means sticking with your well thought out financial plan and asset allocation.)

Cody Hybiak is an Advisor Services Associate & Investment Advisor Representative with SEM. He assists SEM’s advisors in reviewing their investment allocations as well as importing and monitoring the data that generates the signals inside SEM’s trading systems. Cody received his Bachelor of Science degree in Business Administration (Accounting emphasis) from the University of Arizona with an emphasis in Accounting. He joined SEM in March 2017.

About Jeff Hybiak, CFA
New Kent, VA
Jeff joined SEM in October 1998. Outside of SEM, Jeff is part of the worship team at LifePointe Christian Church where he plays the keyboard and bass guitar. He also coaches a club soccer team.
Previous Post : Great expectations   Next Post : How trade impacts the economy