For nearly every person still alive, we’ve been conditioned to believe the government and Federal Reserve can “stimulate” our economy out of recession by simply increasing spending and lowering interest rates.  While this textbook theory continues to be gospel for nearly every economist, few are asking whether or not it still works, or more importantly, what are the consequences if it stops working altogether.

Whether it is the “go down with the ship” mentality in Europe, where they have decided that they will continue supporting a country that will NEVER be able to pay back all of its debts (even by extending the maturity of their loans by 7 1/2 years), or here in the United States, the people in charge continue to experiment with tweaks to their long held theories.  Rather than admitting their theories are wrong, they continue to believe that if we just buy a little more time that eventually the economy will get back on track.

This may come as a surprise, but I struggled through both of my economics classes in college.  I had a 4.0 GPA in the College of Business, but Economics was taught out of the Liberal Arts College.  That right there should have been my first clue that I was in for a tough time.  Nobody has ever accused me of being an artist.  My brain loves to work through things that are supported by hard numbers and things that can be tested in the real world.  Having worked inside my grandfather’s businesses for as long as I could remember and having already been a controller for a mid-size business, I could never take these theories based on widget manufacturers and see how they worked in the real world.

I just saw too many inconsistencies in how things worked in their world of hypothetical consumers and how people reacted when it came to real money.

It wasn’t until 1997, well after I took my economics classes that I began to understand more about economics.  Thanks to the internet and my new best friend Fred (Federal Reserve Economic Database) I began to study how the different economic indicators reacted at different points of the economic cycle.  I continue to learn more each day.  My goal is to be able to communicate to our readers what is really happening in our economy so that they can see why something is or isn’t working.

Basically there are two prevailing economic schools of thought: 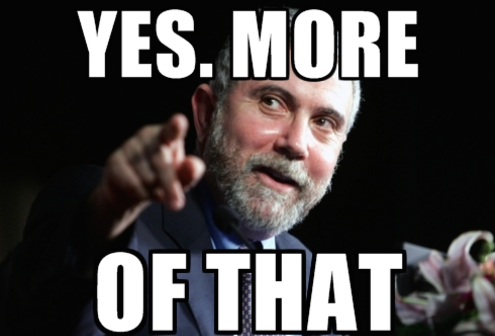 Keynesian Economics – this theory is named after John Maynard Keynes and was developed during the Great Depression.  Keynesian economists believe that there is a circular flow of money where one person’s spending goes towards another’s earnings, and when that person spends the money it goes to another’s earnings.  This “money multiplier” continues on and helps support a normal functioning economy.

The problem, according to Keynesians is when a crisis hits people begin to hoard their money, reversing the money multiplier.  The Keynesian solution is for the public sector (government) to provide stimulus (spending) to keep the economy going.  Keynesians believe that too much saving and not enough spending is dangerous to the economy.  Keynsians also believe that wealth needs to be re-distributed from the wealthy to the poor because the poor are more likely to spend it, while the wealthy will save it.

Laissez-Fair Economics (Austrian School) –  prior to the Great Depression, this was the only school of thought.  It was believed that the public sector should not be involved in the economy.  Austrians believe that left by itself, the economy will find its own equilibrium and that mathematical modeling of an evolving market is extremely difficult, if not impossible.

The “hands off” school of economics is generally referred to as the Austrian School as many of the initial proponents of this were from Austria, including Nobel laureate Friedrich Hayek.

Keynesian Experiment is Not Working

As most of you can probably figure out, Federal Reserve Chairman Ben Bernanke is a big believer in Keynesian economics.  We are watching in real time the professor try various theories out on the economy.  Rather than admitting that there are STRUCTURAL problems (too much debt) the chairman continues to force Keynesian economics on us.  As I said last month, he is either lying or incompetent about not understanding why the economic recovery is so weak.

Remember, since the recession ended in July 2009, the economy has yet to be able to stand on its own.  Besides the stock market, all other economic indicators are tracking the worst recovery on record.

I think this chart is proof enough that Keynesian economics is not working (7/25/16 comment — note that since QE3 ended, the flat Fed Balance Sheet has been replaced with more deficit spending.  Think about the facts in the chart for a minute……it has taken $741,198 of “stimulus” for every job the president is taking credit for creating.  Now the Progressives on the left want to spend MORE money to create MORE jobs!) 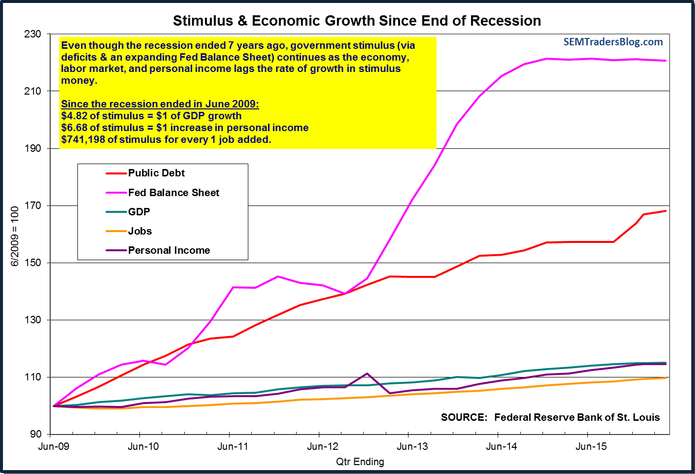 Anybody that believes that we need to spend MORE money by adding MORE debt is delusional.

Another economic theory that actually does make sense is the law of diminishing returns.  This law states that there is a progressive decrease in marginal (per-unit) output as the amount of a single factor of production is increased.  Another way to look at it is what my mom taught me…..too much of a good thing is not always a good thing.  While it usually applies to the production process, I think we can see how it applies to macro economic policies.

Now replace fertilizer with “money” and crops with “the economy”.  See the parallel?

The reason Keynesian Economic theories have not worked during this economic slowdown is because they used too much “fertilizer” over the past 30 years. (7/25/16 Comment:  Not to let the Republicans off the hook — they’ve long discussed the “good old days” of Reagan’s ‘trickle down economics’.  The facts tell us Reagan increased the deficit by a higher percentage than any president since then.  Those increase in debt have done little for the rest of the economy.) 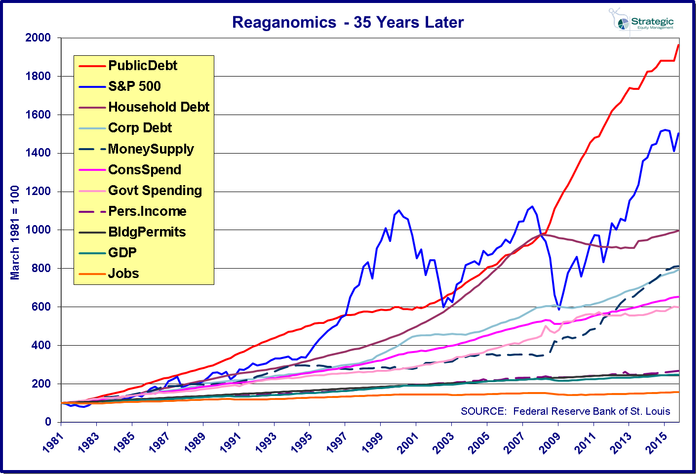 The Fed is “Shooting Blanks” because of the law of diminishing returns.  Our fields have had too much fertilizer and the only way to let them heal is to STOP ADDING FERTILIZER.

Remember that “circular flow” of money that Keynesians depend on for their theories to work?  In 1987 every dollar put into the economy generated $3.17.  Since that time, each dollar added to the economy has generated less and less money.  (7/25/16 Comment:  It’s interesting to note the multiplier has increase since 2014 when the Fed first tapered and then ended QE 3.  Since then we’ve seen banks start to release some of the money they’ve been holding in reserves.  The fact of the matter is, even with that slight increase, the theory of new money “created” by the government expanding into even more money simply does not work any more.  If anything, it has made things worse.)

As it is now, each dollar put into the economy turns into $0.73.  When will the policy makers admit that Keynesian Economics is not working?

I realize that we cannot change the school of thought our policy makers follow overnight.  For what it’s worth, I actually fall somewhere in between the Keynesian and Austrian school.  We can certainly make our opinions known to our elected representatives and if they will not push to get away from this failed school of thought, we can find somebody next year to support with our vote.

What we can change overnight is how we are prepared for the inevitable decline.  I was asked yesterday on the radio if it could be worse than 2008 and I said that it is a strong possibility.  Think about it……..

–What saved the market and the economy after the tech bubble burst?  Massive stimulus from both government spending and the government/Fed induced housing bubble.

–What has saved the market, the financial system, and the economy after the housing bubble burst?  Massive stimulus from both government spending and the Fed.

–What will save the market and the economy from the next crisis?  Not the government because they will be the next crisis.  You can’t keep spending $1 and getting $0.81 out of it forever.

Being prepared by making sure your serious money (the money that if lost would directly impact your quality of life) is being managed in such a way that it can play defense when necessary will be the key to surviving the next crisis.  I’m not sure when this crisis will begin — It could start as early as next week or not take place for many more years to come.  Eventually the next crisis will arrive and if it does when the government and central banks are still in “stimulus” mode they will have nothing to fight the crisis.  (7/25/16 Comment:  Given we are now 5 years down the road and the government is still in “stimulus” mode, the consequences of the next crisis will easily make it worse than 2008.)

If you asked most people in January 2000 if they thought the NASDAQ could lose 85% of its value they would have laughed at you.

If you asked most people in January 2007 if they thought housing prices would decline 30-40% they would have told you that you were crazy.

If you asked most people now if they thought the stock market could lose 50% as governments around the world realize they cannot continue to borrow money to support their growth they again will think you are crazy.

Our goal is to make as much money while we can with an eye on the door for when things get ugly.  That defensive stance means that we will not keep up with the stock market, but it does mean that when the crisis hits we should lose significantly less money.

I think it is interesting that John Maynard Keynes &  Friedrich Hayek were rivals when they both lived in Great Brittan.  While they were both alive Keynes obviously had the upper hand, but the battle is far from over.  If the money multiplier continues to collapse under the weight of too much stimulus, Hayek’s Austrian school may be vindicated.

This topic has been a bit heavy, so for those of you still reading I thought I’d offer a lighter way to look at this complex topic.  Thanks to one of our valued Business Partners, Steve Ellis for sending me this highly educational and entertaining (at least to nerds like me) video. 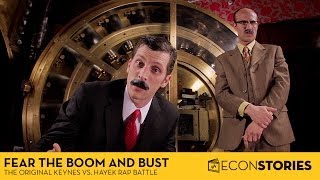 About Jeff Hybiak, CFA
New Kent, VA
Jeff joined SEM in October 1998. Outside of SEM, Jeff is part of the worship team at LifePointe Christian Church where he plays the keyboard and bass guitar. He also coaches a club soccer team.
Previous Post : The Ostrich Market   Next Post : Price/Sales &amp; 10 Year Predicted Returns