What do rising rates tell us?

When you hear a non-business radio station discussing the rise in interest rates it is clearly something people are starting to notice. Most people, including too many financial reporters want to group all interest rates into a single category. They do not understand the inner-workings of how interest rates are set or why they are moving. This includes our President.

Last week President Trump was openly critical of Fed Chairman Jerome Powell (somebody he appointed because he was an ‘outsider’ i.e. non-academic). The president did not like that the Fed is continuing to raise interest rates and said they are threatening the economic recovery. This week we have seen the 10-year Treasury bond move to levels we have not seen since 2011. The two ARE NOT related. The Federal Reserve sets SHORT-TERM interest rates. With the exception of the last 10 years when the Federal Reserve and other global Central Banks were openly purchasing most newly issued government bonds, the free market sets LONG-TERM interest rates.

The irony is the 10-year Treasury is moving higher due to fears the Federal Reserve is moving too slowly to control inflation. Nothing erodes an economic recovery (or the value of a bond) like inflation. Even more ironic, is longer-term rates are moving higher over fears the US Government Budget Deficit is out of control. Increasingly we are going to see interest rate payments eating more and more of the revenue. The tax cuts, while boosting economic growth short-term are only causing both higher inflation and lower revenue thus far. When you add the inflationary impact a full-blown trade war will have in the US, you get a recipe for even higher inflation.

In other words, chances are high when we look back at the cause of the next recession we will clearly point to the tax cuts, the trade war, and a Federal Reserve that moved too SLOWLY to combat the inflationary impact of those Trump Administration policies. That’s not a political statement, but merely an economic reality based on decades of studying the markets and economic history. I’ve said this about the last two Fed Chairs and will especially say it about Jerome Powell (since he has to remove the stimulus the last two Chairs added at the same time he’s dealing with tax cuts and a trade war) — I wouldn’t want his job.

Circling back to the original purpose of this post — the Chart of the Week — looking at the 10-year Treasury Yield, we can see now that we are back above the highs set earlier this year the next stop could be somewhere around 3.40%. 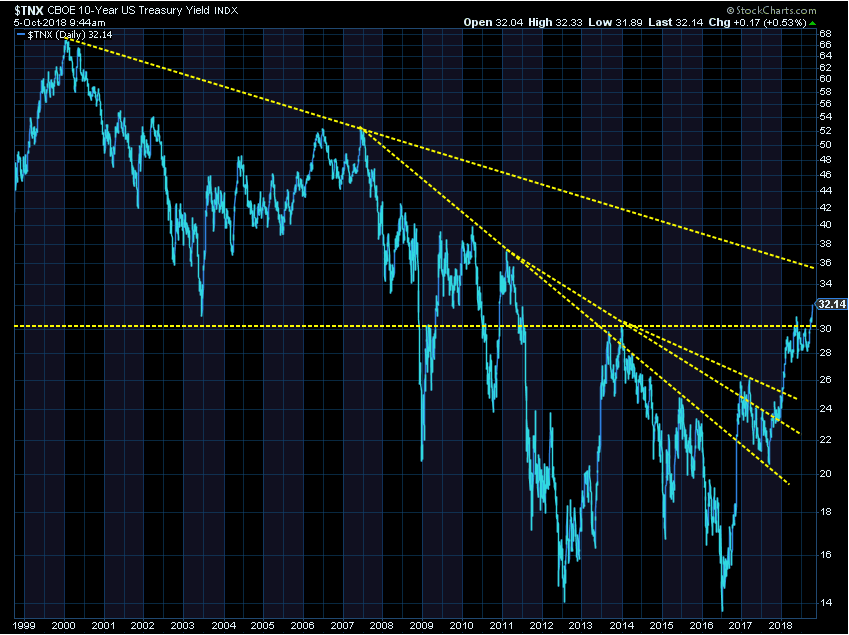 This does not mean we won’t have some drops in rates, but the trend is clearly up due to all the above reasons. The only thing that could stop that would be a sharp slowdown in economic growth and/or the Fed accelerating their interest rate increases to combat rising inflation. For now our monthly interest rate/economic outlook in our Dynamic Income Allocation model has us “bearish” on Treasury Bonds (meaning that portion of the model makes money as interest rates increase).

Since I’m already well over the length of a normal Chart of the Week post, here are some bonus Charts from Ned Davis Research.

First, look at the growth of the economy (top box) versus the Federal Budget. Economics 101 — a government is supposed to PAY DOWN its debts during economic expansions. Instead we’ve had nearly the longest running economic expansion in the history of our country and the budget deficit is approaching the levels from when we were fighting the second worst economic recession in the history of our country. 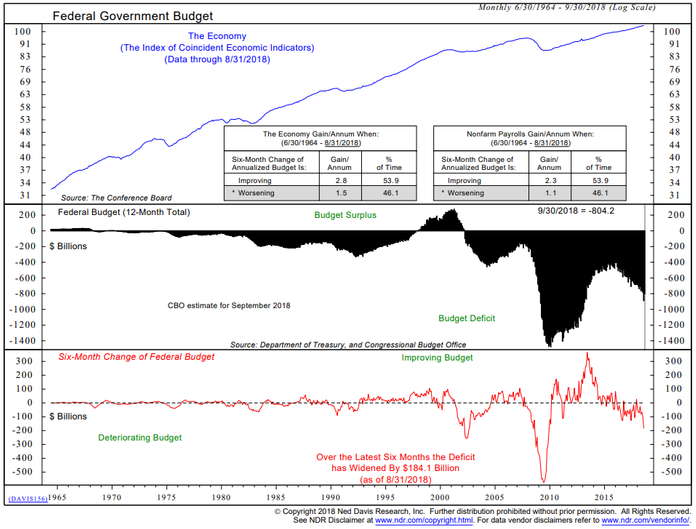 Next, we can see the issue — the Trump Administration has accelerated the spending they criticized in the Obama years at the same time they have slashed tax revenue. 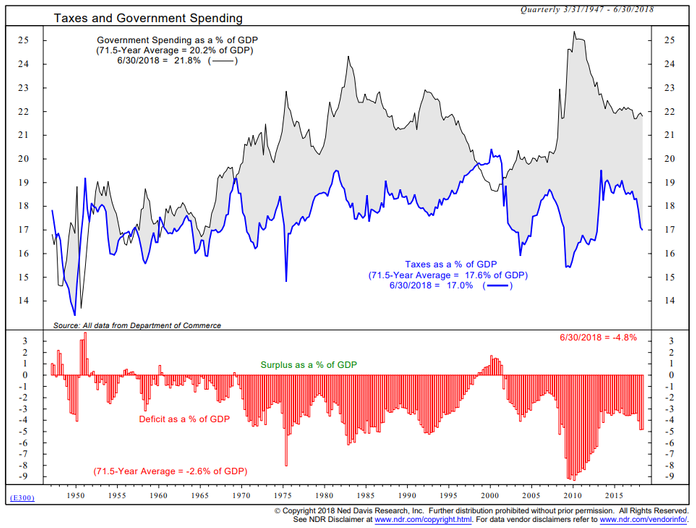 Finally, this is where it all comes together to the main topic for today — the impact of rising interest rates. Already 25% of government spending is going towards interest rates. As rates go higher and the government has to not only refinance the record setting old debt, but borrow more to support current spending, this will eat away more and more of our budget. 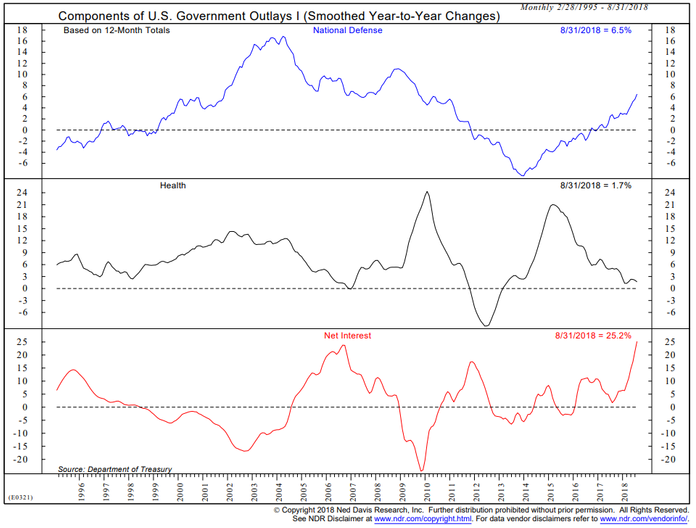 It’s not just the government that will have this issue, but also corporations and households. It seems when you don’t punish those that made bad decisions, they will continue making bad decisions. Due to the “solutions” used to control the carnage of the last recession, those same bad actors have only been emboldened to borrow even more money.

Finally, I’ve been asked many times what the sell-off in bonds means for stocks. Here’s a short video I put together to answer that question. 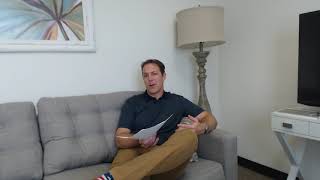 About Jeff Hybiak, CFA
New Kent, VA
Jeff joined SEM in October 1998. Outside of SEM, Jeff is part of the worship team at LifePointe Christian Church where he plays the keyboard and bass guitar. He also coaches a club soccer team.
Previous Post : Not an efficient market   Next Post : 3rd Quarter 2018 - Fall Newsletter