Nearly a year ago Republicans took control of Washington. During the election campaign they promised big changes that would spur a sharp increase in economic growth. One of the primary drivers of their plan was to slash taxes. A year later we finally are seeing their ideas take shape and it’s hard to see how they will cause more than a small blip in economic growth.

While the president was promising growth in excess of 5% (I’m assuming he was quoting numbers that included inflation —- or at least I hope he was), most Republicans have said their tax plan would push GDP growth well above 3%. The 3% number is something often used as the benchmark as that is the long-term historic growth rate of our economy (after adjusting for inflation). Over the past 9 years most Americans have not felt like we were in an economic expansion because the growth over that time failed to return to our average growth rate. The Republicans won the election primarily because of this and their promises to boost growth. 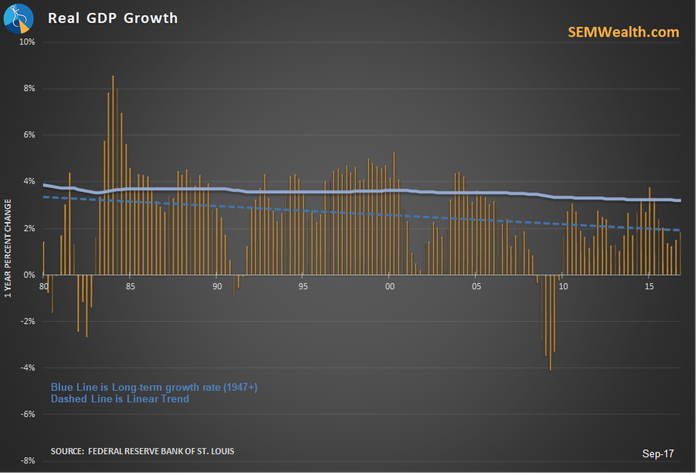 This chart shows the 1 year percentage change in GDP (rather than the “official” GDP number, which takes the growth the last 3 months and compounds it 4 times). During the current 9 year economic recovery, we’ve only seen growth eclipse the long-term trend one time (late 2014). Since then it has fallen back to about 2%.

Don’t get me wrong, putting more money in people’s pockets is certainly a good thing. This could push growth back to the 3% range and possibly even a bit higher. This would FEEL really good………………..for a brief amount of time. The problem with the approach taken by Congress the last 40 years is focusing too much on what will get them elected every 2 years rather than what will actually spark long-term economic prosperity for ALL generations.

It is mathematically impossible given the structure of our economy and the demographics to get GDP growth back above a sustainable 3% rate with these tax cuts. Even reducing regulations will not do enough to spark sustainable long-term economic growth. When you strip out everything else, our long-term economic growth comes down to two things — how many people are working and how much are they producing. Economists call this “Potential GDP”.

Everything else is simply shifting money already inside the economy from one group to another. We can measure Potential GDP by a very simple formula — Growth in the Labor Force + Growth in Productivity. The next two charts look at these data points using a long-term, 30 year average and a more near-term 10 year average. 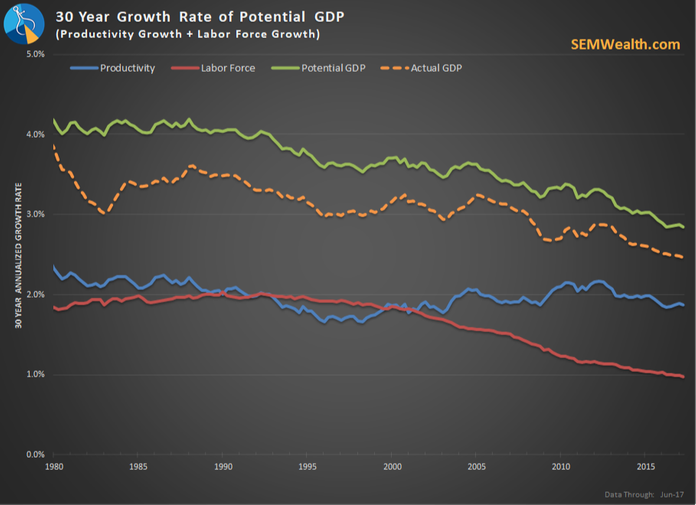 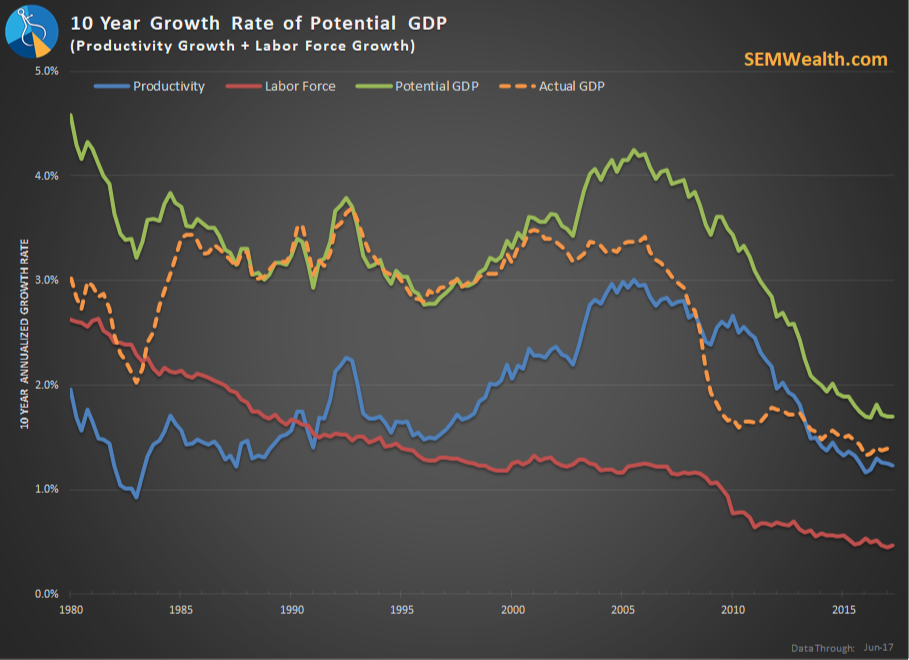 Looking at this formula and how it relates to the economy we can see the problem with simply cutting taxes. Our labor force is shrinking and most Republicans want to shrink it even more by tightening immigration policies. The pace of Babyboomers retiring is only going to accelerate the next 10 years and we do not have the workers nor the jobs to replace them.

With a shrinking labor force, we could still see economic growth if we figure out a way to make workers more productive. Unfortunately, we see no jobs programs to educate and train workers to fill jobs that are in demand. Even infra-structure spending on roads, public transportation, internet services, etc have fallen by the wayside. Productivity growth peaked in the middle of the last decade. Coincidentally we saw investment spending peak in the last 1990s. Actually, this isn’t a coincidence. It takes LONG-TERM thinking to INVEST in the future. This requires patience as we do not see the benefits right away.

Until we see companies and the government INVESTING in our future, rather than shifting money from one group to another, we will not be able to sustain a 3% growth rate. Sadly our elected leaders do not understand this and the electorate will not hold them accountable.

One last thing. Notice how Potential GDP has been higher than actual GDP most of the time? The one exception was on the 10 year chart in the 1980s & 1990s when we saw strong economic growth due to both an increasing work force and gains in productivity.  The reason actual GDP has rarely exceeded potential GDP has to do with debt. If the economy is not growing fast enough to keep up with the additional debt it will become increasingly impossible to hit the potential GDP numbers. It’s just like your household budget — if you borrow money for “stuff” that doesn’t increase your future income growth, you’ll be taking money out of your future budgets just to pay back the money you borrowed.

Again, I’m not opposed to allowing Americans to keep more of their earnings, but do not be fooled by these tax cuts. These cuts will increase the deficit far faster than economic growth will make up for it, making it even harder in the future to grow the economy. Economics is not as hard as people like to make it. It’s time we hold our leaders accountable and insist they start thinking LONG-TERM in order to help ALL generations.

About Jeff Hybiak, CFA
New Kent, VA
Jeff joined SEM in October 1998. Outside of SEM, Jeff is part of the worship team at LifePointe Christian Church where he plays the keyboard and bass guitar. He also coaches a club soccer team.
Previous Post : The Consequences of Political Polarization   Next Post : Behavioral Finance 101