In college, my peers voted me “most likely to appear on CNBC”. Even back then I enjoyed talking about the markets and attempting to educate anyone who would listen about how the markets work (or don’t work). Some of my fondest memories occurred after class or during a professor’s office hours where we would debate academic theory versus real world experience. (After 3 semesters I quit school for a few years, so had some experience in the real investment world.)

21 years later and I am still waiting for that call from CNBC. My appearance last week on an investment panel at a Broker/Dealer conference is probably one of the reasons I will not make it on any financial network — I typically disagree with the message their advertisers are pushing. I shared the stage with a strategist from a very large investment management firm who exclusively utilizes an even larger fund family. This firm also happens to be a large sponsor of events like this. I tried to be cordial, but after one question I felt as if I was back in college sitting in my professors’ offices. The monotonous relay of all the academic research (which won Nobel Prizes) was just too much for me to sit back and allow the audience to not hear the other side.

We have all heard it, especially if you have a finance degree. When you add in “beta” (how much a fund is expected to move compared to the overall market) to the first two items on the list you have the Nobel Prize Winning Fama French Three Factor Model. They’ve added profitability and momentum as additional factors in their portfolios over the years. The problem is EVERYBODY knows this. Another panel member even tried to point this out saying, “most research shows the ‘alpha’ added by a factor is arbitraged out a few years after the research is released.” I forget what the reply was, but it essentially came down to, “nuh, uh, our Nobel Prize winning professors disagree.” [I’m still combing through what is starting to be reams of research on the dangers of factor investing…….stay tuned.]

Don’t get me wrong. I not only respect and value the research, but we have used it at SEM since I joined 20 years ago. The difference is in the implementation. We have found through our own research the same thing the other panel member pointed out — known factors get arbitraged out. The advantage we had by over-weighting small caps and international stocks in the 1990s has disappeared. We’ve learned you have to be far more selective when you implement these “factors” in a portfolio.

More importantly from a behavioral standpoint, we’ve learned you cannot simply tell clients it is ok to under-perform for years and years (or over 15 years in this fund family’s case) because you have the academic research to back it up. You also cannot fail to tell your clients how much they should be expected to lose.

Instead of saying, “the markets will go down, but over the long-run they will come back”, why not say, “this investment could lose over half it’s value during a bear market, which you should expect at least every 10 years if not more often. Over the long-run we believe it will come back. Are you 100% sure you can see these types of losses and not bail out?”

In my 20 years I’ve seen very few people who can withstand it, so we instead choose to adapt around human nature. These academic studies assume 100% rationality in investors. Sociologists since the 1600s have said we should assume irrationality in humans. Who are we to believe — the professors studying numbers or the professors studying humans? We instead choose to trust the latter.

By the way, just because somebody wins the Nobel Prize in Economics does not mean their research is the final and only answer. At least 3 behavioral economists have won the prize (Rober Shiller, Daniel Kahneman, and most recently Richard Thaler). I dove deeply into this research last year in Behavioral Finance 101 as it is the basis for everything we do at SEM. This fund family (and many others) even has a “behavioral scientist” on staff. I’ve sat through now 3 of these large firm “behavioral investing” webinars and their idea of behavioral coaching is to basically say, “you should stick with this investment because it’s the right thing to do.” I think whenever somebody tells us what we should be doing most of us feel our inner-teenager coming out, which could lead us to doing the opposite.

At SEM, we chose to let the data speak for itself. This panel member had the audacity to say 15 years was not a long enough time to evaluate an investment. Over the last 15 years we’ve had a bull market, bear market, and bull market. While I would prefer to have one more bear market in that cycle for a full evaluation, it is still enough to understand if we are being compensated for the amount of risk we are taking. In the case of these academic portfolios, the answer is a resounding NO! In fact, this week’s Chart of the Week shows that their portfolios are essentially the same as the no fee Morningstar passive allocations (which include no factor tilts). 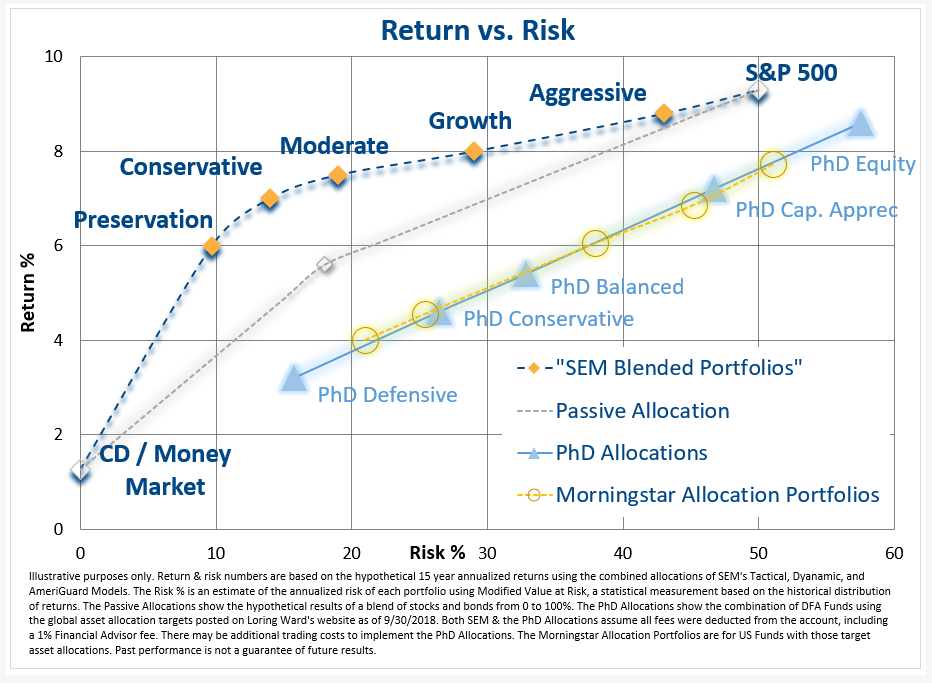 What is important to highlight on this chart is how much value our behavioral approach adds in the area of risk where most clients fall — somewhere between 5 to 30%. We still utilize the research from these professors, but the data has proven our method of implementation has a distinct advantage.

About Jeff Hybiak, CFA
New Kent, VA
Jeff joined SEM in October 1998. Outside of SEM, Jeff is part of the worship team at LifePointe Christian Church where he plays the keyboard and bass guitar. He also coaches a club soccer team.
Previous Post : Plenty to Be Thankful For   Next Post : Diversified Losses