On Friday Jeff wrote a very well thought out and sophisticated article going over the reasoning and data behind Facebook’s valuation after it fell 25 percent (located here).  I saw that same drop and clicked buy (for my non-SEM account that is completely discretionary and has nothing to do with the trading strategies and opinions of SEM’s Scientifically Engineered Models.) 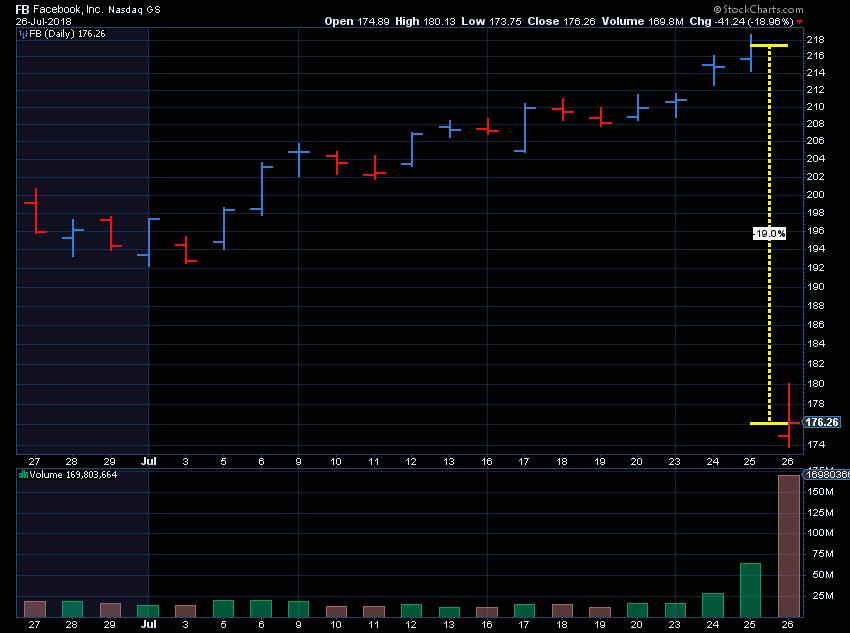 That is one of my biggest buying strategies, looking for severe dips and doing a bit of research as to why there was a dip.  For Facebook’s case, their earnings didn’t look as good as the investors expected, so the stock was suddenly less valuable.  To me, as someone with an accounting degree, a profitable company like Facebook can be valued in part to its earnings and the expectation for earnings growth.  So maybe the stock fell because of that, but why the heck did it fall 25%?  Then, I looked at the trading volume and saw that the volume of Facebook trading was more than triple what its average volume is, and there I found my answer.

One of SEM’s big selling points for financial advisors is trying to take out the emotion in trading and simply looking at the data.  Emotions can really get in the way of what the data really says and will hurt the overall performance of his or her portfolio.  (the Chart of the Week a few weeks ago explains this) 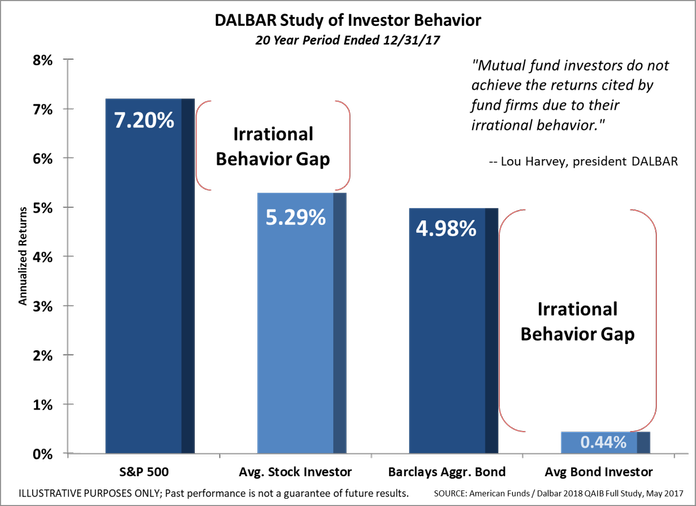 So, when I saw that volume number I was certain that not all the over 70 million Facebook trades were by people who weren’t using their emotions.  And if there’s one good way to get a stock to fall, it’s getting a ton of people panicking and selling it at the same time.  So while Facebook is a company that looks attractive because of its high growth numbers since becoming a publicly traded company, and as an accountant some of that company valuation has to be bloated, a 25% drop for a large cap company that is still profitable and still expected to beat its earnings from 2 years ago even with a gigantic scandal bringing it down, is exactly the kind of stab to take.

This is also a very good example of why your advisor and yourself need to be honest about the risks you are comfortable with, so these kinds of emotional decisions don’t lead to you taking a 25% daily loss you don’t need to take.  I’m sure there were a lot of Facebook sellers yesterday who had no business investing in something as risky as a new growth company, but those returns sure looked good while the stock was going up!  If you really want to invest in Facebook, make sure you have the rest of your financial pyramid taken care of.  My use for this personal account would be the golden step 5 on the top of the financial pyramid, and that top only works if the rest of the pyramid is running soundly. [This page from the SEM website explains our Behavioral Portfolio Approach.]

[Jeff’s comments: From the moment he got his first paycheck, Cody opened a Robin Hood account (a very millennial “free stock trading” app. I encouraged this as a way to learn about the market. I’ve watched him evolve his strategy into this contrarian, opportunistic approach.  This is how I started in the early days of “cheap” online trading. At SEM we’ve determined it is better for our clients and SEM overall to follow a “top down” approach. Depending on the research and time frame, 90 to 95% of a stock’s movement is correlated to its industry. 90 to 95% of an industry’s movement is correlated to the economy (and where it falls in the economic cycle). Therefore, getting the economic and/or industry trend right is far more important.

However, my contrarian, opportunistic approach in the 1990s evolved into one of our longest running trading systems (the Volatility System inside of EGA). This mechanical approach measures the “fear” behind a drop in various industry sectors and looks to buy for what is typically a sharp snap-back.

As Cody said, this is not a recommendation for anybody to buy Facebook, but an example of how we can take advantage of investor behavior.]

Cody Hybiak is an Advisor Services Associate & Investment Advisor Representative with SEM. He assists SEM’s advisors in reviewing their investment allocations as well as importing and monitoring the data that generates the signals inside SEM’s trading systems. Cody received his Bachelor of Science degree in Business Administration (Accounting emphasis) from the University of Arizona with an emphasis in Accounting. He joined SEM in March 2017.

About Jeff Hybiak, CFA
New Kent, VA
Jeff joined SEM in October 1998. Outside of SEM, Jeff is part of the worship team at LifePointe Christian Church where he plays the keyboard and bass guitar. He also coaches a club soccer team.
Previous Post : Great, but not historic   Next Post : Lessons from Facebook&#39;s Crash