Last week we saw an increase in the pace of job creation. This week the Fed is expected to raise interest rates. Depending on your vantage point, things are looking up or they are about to turn lower.

We will delve deeper into the Fed decision later in the week. Looking back at Friday’s February Payroll report, it is hard to find anything negative to say. The first month of President Trump’s presidency certainly backed up some of the excitement and if it continues we could see it turn into legitimate growth (although I still have a hard time seeing the 3.5 – 4% growth in the Trump team’s projections.)

While even seeing growth in the 3% range would be nice, over the long-term what really matters is seeing our labor force (and productivity of that labor force) actually growing. We have some daunting demographics facing our country which will create a major drag on growth until we can have more people entering the work force than leaving it. The Labor Force Participation rate picked up slightly, but it is still back at 1970s levels as shown by this chart from Advisor Perspectives. 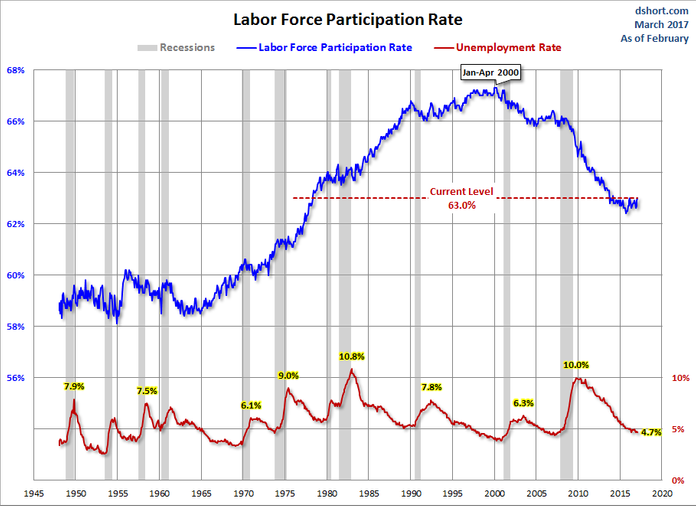 While this week we will be focused on what the Fed might do to slow down our economic growth rate, what we need to do is figure out ways to turn this trend around.

Market participants are cautiously awaiting the conclusion of the Fed’s 2-day meeting tomorrow. For the most part the markets have largely ignored a wide array of risks in the market with the focus being on the “good Trump” policies and the impact the classroom models say they will have on the economy.  Are investors about to get knocked over?

Art Cashin, director of floor operations for UBS and one of the few “experts” from Wall Street I pay attention to, late last week discussed a “slightly disturbing” trend happening in the market — small cap stocks are underperforming and have given up most of their gains for 2017 in the last few weeks. This is something our Price Divergence System, Economic Outlook System, and yesterday our Market Composite Directional System have all picked up on as well. (For newer readers, the reason I listen so much to Art is his track record of calling it like he sees it. When first starting with SEM back in 1998 he was one of the few people our founder Rick Gage would unmute the TV in our office for whenever he was on. He successfully warned about the imploding of both bubbles, which is why he is still around.)

The reason this is a concern is the fact small caps SHOULD be rocketing higher right now if economic growth was accelerating. This along with a partial sell signal in both our High Yield Bond Trend following systems and our Economic Outlook Systems says something is not quite right.

Maybe it’s just the Fed’s looming rate hike that has everyone concerned, or maybe it’s something else. Tread carefully.

The market is freaking out about a 1/4% (likely) increase in the SHORT-TERM interest rate set by the Fed. So much so, it ended a 105 day streak without a 1% or higher loss yesterday.

Whatever the Fed does or says today, it is a giant leap to think this is the end of the bull market. Granted, valuation measurements tell us it should end at any time and when it does it will be UGLY, but if the economy cannot handle a 0.25% jump in interest rates then maybe the market should go down and go down HARD.

For now, my economic models say growth is accelerating, so a rate hike is not necessarily a bad thing. High yield bonds have sold off (we received more sell signals yesterday in Tactical Bond & Income Allocator — check the Allocations tab for more details), but the decline is more a function of a drop in oil due to increased supply. Again, not necessarily a bad thing.

Janet Yellen continued to be the best friend of stock investors and speculators in her press conference on Wednesday. Going into the meeting the market participants fully expected the 1/4% rate increase the Fed delivered. The fear was the Fed would do as it always does and push rates too high and cause a recession. Shortly into her press conference the Fed Chair calmed those fears by saying, “the data has not noticeably strengthened.”

From there the market took off like a rocket. While she is correct the coincident & lagging economic data has not picked up, most leading indicators have significantly picked up. Even Chair Yellen cited the one wild card in all of this  — the planned pick up in “fiscal” spending. Fiscal Stimulus is the fancy term economists use to categorize government spending. In this case it is President Trump’s plan to spark economic growth by both slashing taxes and increasing expenditures. Not much action has taken place on either front thus far, so it could be pushed back into next year.

What the market does from here is anybody’s guess. The sectors that were beat up the most the past two weeks were the strongest on Wednesday. Whether that was bargain hunting or a short-covering rally it will be something to watch closely. Our indicators rarely reverse course on one day and yesterday was no exception. If the action yesterday is repeated a few more days we could see our allocations shift back to fully invested relatively quickly in our income programs. Enhanced Growth is still heavily invested and Dynamic Aggressive Growth remains in an overweight (growth) allocation.

About Jeff Hybiak, CFA
New Kent, VA
Jeff joined SEM in October 1998. Outside of SEM, Jeff is part of the worship team at LifePointe Christian Church where he plays the keyboard and bass guitar. He also coaches a club soccer team.
Previous Post : Continuous Improvement   Next Post : Objectively, this is a bubble