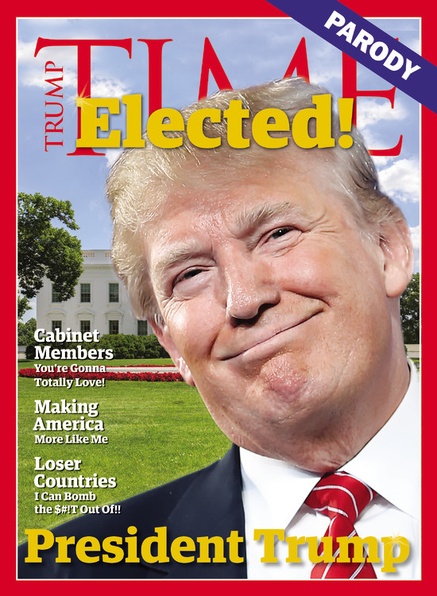 As I write, it is 2:22 am ET. I spent the last 6 hours in the hotel bar watching the election coverage with fellow guests from all over the country and even the world (and sharing my thoughts on Twitter). The sentiment even from our new friends from France that whatever the final outcome, our country is truly at a breaking point. The fact Donald Trump was still in the race by 9 pm ET was shocking enough. Depending on the projections used, he may be our next President. As Mr. Trump pulled ahead, Wall Street traders panicked, with the S&P 500 futures hitting their lows at down 5%.  Looking at this parody magazine cover I found on Google, most people mocked the idea of a President Trump.

Flipping between CNN, Fox News, and CNBC we got different counts but all seemed to agree it looked like Mr. Trump defied all odds and may have won enough electoral votes to become President. Most expected Mrs. Clinton to concede, but instead she sent our her campaign manager out to say “there are still votes to count”, giving her supporters hope that she may contest the election results. This despite criticizing her opponent for not saying during the final debate that he would accept the results. The futures market rallied 2% off the lows after the non-concession speech.  Within an hour NBC began reporting Mrs. Clinton called Mr. Trump to concede and the market reaction was relatively calm.  Maybe that is a good sign?

While the final, official results may not be out for a while, I do know I’m thankful for our mechanical systems that shifted our exposure significantly over the last few days to a more neutral stance and will be there to look for buying opportunities or additional risks in the days and weeks ahead. I will remind everyone about the “Brexit” reaction that was quickly reversed as cooler heads prevailed and market participants realized it takes a LONG-time for things to truly change.

[3:14 am ET update]: Most official outlets are calling it for Mr. Trump. I just heard the President-elect’s speech and wonder where that Donald Trump was during the campaign. He was calm, gracious, respectful, & optimistic. He had plenty of good ideas, but like he said, “It’s time to heal. It’s time to go to work.” Since the speech the futures market has come off the lows nicely, but are still pointing to a lower open. The market doesn’t like uncertainty & having an “outsider” in the White House is certainly none of us have any experience with.

It’s been an exhausting day.  Thankfully I don’t have any meetings until after lunch today.  I’ve been up for 23 hours and am heading to bed.

Check back throughout the day for additional updates.

About Jeff Hybiak, CFA
New Kent, VA
Jeff joined SEM in October 1998. Outside of SEM, Jeff is part of the worship team at LifePointe Community Church where he plays the keyboard and bass guitar. He also leads a small group Bible study.
Previous Post : What&#39;s Next   Next Post : Almost Over (Election Day Edition)