Cracks in the Financial System

You can only manipulate the financial system so much without causing a large disconnect in the free market. This week we briefly saw what can happen when too many people want to get cash out of a system the Federal Reserve has been micro-managing while trying to stimulate economic growth.

Normally the financial system hums along without incident. Banks take your deposits and then “invest” them by either making loans or handing the money over to their proprietary investment divisions. If a bank doesn’t have enough cash available, they will use their short-term assets such as Treasury Bills, Mortgage Backed Securities, or other short-term notes to borrow money from other banks. The interest rate is typically right around the Fed Funds target, which was around 2.25% until they cut it to around 2% on Wednesday. 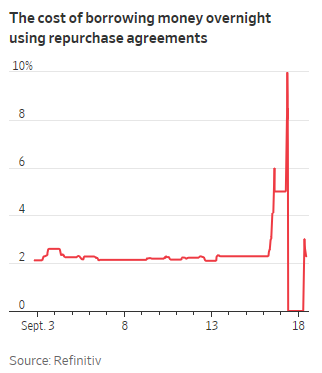 However, Friday and Monday we saw more demand on cash than others were willing to provide. This led to a spike in the interest rate for the overnight loans. Some loans were made at as much as 10% with the weighted average of all loans coming in over 5%. This caused the Fed to inject money into the overnight financial system for the first time since 2009 on Tuesday and again on Wednesday. Over the two days the Fed injected $125 billion into the system by buying short-term debt instruments from the banks who needed cash. The Fed announced another “repo” auction again on Thursday.

What is interesting is we also saw a big spike in late December (before the Fed reversed course and hinted they would be lowering interest rates). If you’ll recall this is when the Treasury Secretary said he had called the large bank CEOs and all said there were no liquidity issues. This actually led to a panic (“why did the Treasury Secretary feel the need to do this? I didn’t realize there were any issues? Maybe I should take money out of the bank!”). This chart shows the overnight lending rates for the past 15 months.

So what exactly happened? The way I always think about it is this scene from my all-time favorite movie It’s a Wonderful Life. 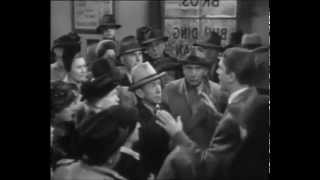 Now instead of having a physical vault like the one where George deposited “mama dollar and papa dollar”, banks often keep their money in electronic “reserve” accounts at the Federal Reserve (where they can earn interest on the deposits and then turn around and use those assets as leverage for their lending or investing operations.) For 6 years the Federal Reserve was creating new money and then purchasing assets from the large banks, which then were deposited into the banks’ reserve accounts. The Fed stopped the purchases at the end of 2014, but did kept the balance sheet in-tact. In 2018 they began letting their balance sheet “unwind” by letting bonds mature and selling a token amount off each month. 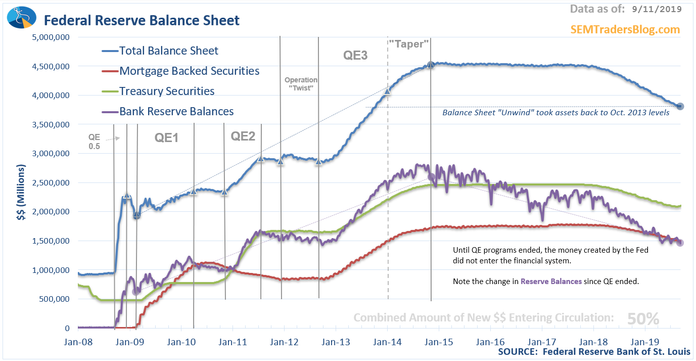 Last month the Fed announced they were ending the “unwind”. Their balance sheet is now back to 2013 levels, a reduction of a mere 16%. According to money market experts the problems this week occurred because a.) banks have lower reserve balances, b.) corporations withdrew money to pay their quarterly taxes, and c.) Treasury bond auctions have been far larger than expected the past few months. All of this should be a cause for concern.

First off, reserve balances are still high and at 2013 levels and yet banks had problems raising money. Second, the quarterly tax payments occur every 3 months and shouldn’t have come as a surprise. Finally, the US Government is borrowing money at a rapidly increasing pace. For 6 years the Federal Reserve was the one buying up all the debt. Now the free market is expected to absorb all the government’s borrowing as well as the increasing amount of debt that is maturing in the corporate debt market.

All while this was happening we’ve seen a historic rally and then sell-off the past few months in the Treasury bond market. As rates push closer to zero at the same time economic growth slows we begin to enter unprecedented levels that have never been modeled. Pension funds, insurance companies (yes that includes your annuity issuers), Wall Street banks, money market managers, and corporate finance departments all have models that assume positive sloping yield curves and positive interest rates. For now the US still has positive interest rates but as they push closer to zero the more the financial models begin to struggle.

Without going into the calculus, the models used to hedge liabilities (such as annuity guarantees or pension promises) begins to break the closer to zero we get. It requires the purchase of more bonds to cover the same amount of liabilities. This can create cash flow constraints as the insurance company or pension fund needs to find the money to purchase the additional bonds (or risk being unhedged, which may not be allowed in their investment policies).

We can’t keep relying on more debt to get us out of our problems which were created because we had too much debt. I fully expect to see more “emergency” actions by the Fed and other central banks in the months ahead, but those temporary actions will only make things worse, especially if it emboldens investors to take on even more risk. Remember, the issues this week are SYMPTOMS of the underlying problem, yet the Fed is programmed to only take care of each minor symptom all while the illness gets much worse. The analogy I used in 2007-2008 was the Fed is treating the pain of the cancer patient while ignoring the tumor that is growing. I fear they will do the same thing again this time. They simply do not have the tools to address the overall problem.

If I were you, whether you’re an investor or an advisor I’d be looking closely at your plans to handle the next recession. Do you have a pre-planned strategy to take risk off the table based on a rules-based approach? Are you hoping to be able to identify signs of trouble and then take action? Are you trusting our central bankers to see the problems and react accordingly to protect your investments?

There’s only one strategy I trust, the same one that is the reason we have been around for 27 years.

About Jeff Hybiak, CFA
New Kent, VA
Jeff joined SEM in October 1998. Outside of SEM, Jeff is part of the worship team at LifePointe Christian Church where he plays the keyboard and bass guitar. He also coaches a club soccer team.
Previous Post : Names can be deceiving   Next Post : Investment Grade Junk