Much Ado About Nothing

Last week the Federal Reserve announced the details of what is now being called Quantitative Tightening (QT). Despite this being well-telegraphed (as have been most moves out of Janet Yellen’s Fed) the bond market reacted sharp……for a few days. Things have settled back down. Yields again declined and stocks resumed their march into all-time high territory.

Despite talking a big game, the Fed is not really doing much of anything to unwind their gargantuan balance sheet. They created $3.5 Trillion of money out of thin air to purchase government bonds from the Wall Street banks. While this did little to impact the economy, the unwinding of this balance sheet could have major implications, which is why the Fed is moving so slowly. I’ve argued for 9 years now that we have no idea where rates on bonds would be in a “free” market. Near the end of QE3 the Fed was purchasing over 3/4 of all newly issued Treasury Bonds. Without the Fed buying bonds and now letting some of the bonds mature without re-purchasing (as they’ve been doing since the end of QE3 in 2015), the question remains — where SHOULD rates be and what will be the impact on stocks.

We will have to wait for quite some time before we know the answer to the question. The plans for QT has the Fed allowing their balance sheet to shrink a mere $10 Billion per month for the next year and then increasing to $50 Billion per month a year from now. In the whole scheme of things this is a gnat on an elephant’s behind. Two years from now the Fed’s Balance Sheet will be around $3.8 Trillion, or $2.8 Trillion above where it was a decade earlier. 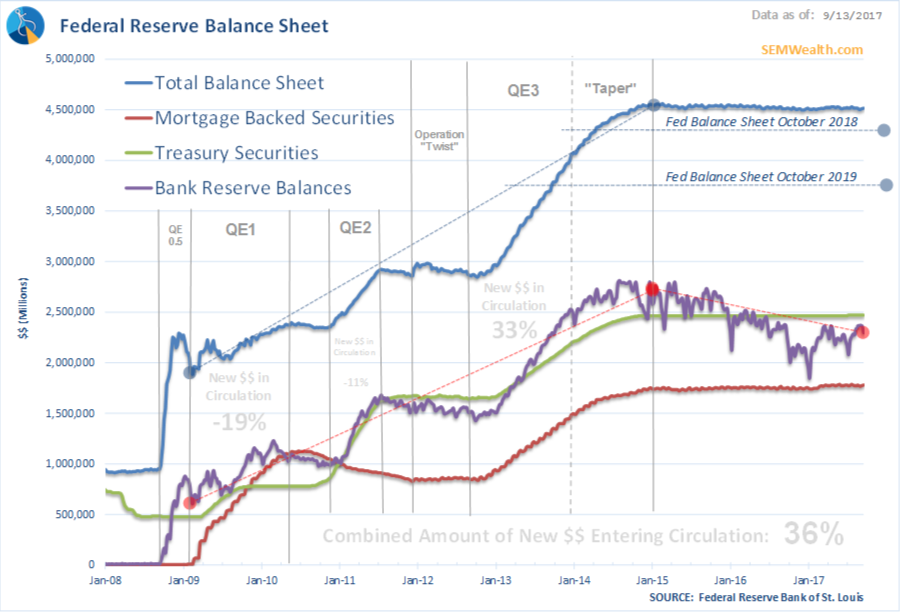 The real issue we will be watching is what banks do with their reserve balances. The story of QE all along has been in these reserve balances (the purple line above). The money created by the Fed never entered the economy because the banks chose to take the money the Fed was giving them and to put 64% of it in their “reserve” accounts held at the Fed. Not only were they able to earn 0.25% on these balances, they were considered “tier  1” in their capital calculations. The banks then were able to turn around and use their high tier 1 capital ratings to leverage their own balance sheets and invest in the markets. (Why commit capital to illiquid things like houses, plants, & equipment when you can purchase highly liquid futures contracts?)

The question now becomes what happens with those reserve balances. We’ve seen since QE3 ended a nice stream of money entering the system. This has given a steady base under our economy. If the banks increase the pace of money flowing out of reserves and into the economy we could see even more economic growth. That is great, so long as it doesn’t cause inflation to pick up to the point where we see the Fed scrambling to control it.

So while the announcement of QT is “much ado about nothing”, this story is not over by a long shot. With unprecedented measures taken to fight the crisis nobody, including the Fed themselves knows what will happen as the unwind progresses. Regardless of what happens, we will be ready — just as we’ve been the last 25 years.

About Jeff Hybiak, CFA
New Kent, VA
Jeff joined SEM in October 1998. Outside of SEM, Jeff is part of the worship team at LifePointe Christian Church where he plays the keyboard and bass guitar. He also coaches a club soccer team.
Previous Post : Short-term vs. Long-term   Next Post : Heading Higher