Still all about the Fed

It’s another week where the highlight will be the “much anticipated” Fed meeting. I’m not sure how we got here or what will happen to get away from this focus on the Fed, but it’s not normal for a central bank to have this much control of the market.  In fact, as I argued back in 2007, the Fed’s micro-focus on trying to prevent any sort of slowdown in the economy has created a situation where the smallest “spark” could set the entire system ablaze. 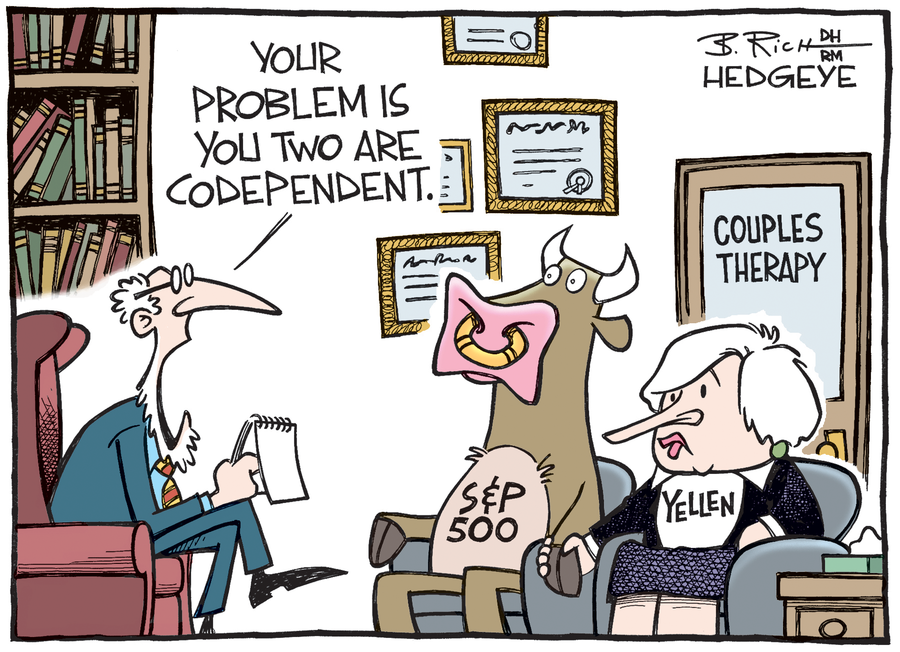 ​​After trying to fight the last forest fire with their normal tools (lowering interest rates & providing “liquidity” in the short-term funding markets), the Fed learned they were ill-equipped to fight such a ferocious fire.  This led them to resort to what had been Fed Chairman Ben Bernanke’s favorite academic theory — Quantitative Easing.  The Fed thought by purchasing assets from the Wall Street banks with newly created dollars the system would be awash in excess capital, which would spark economic growth. 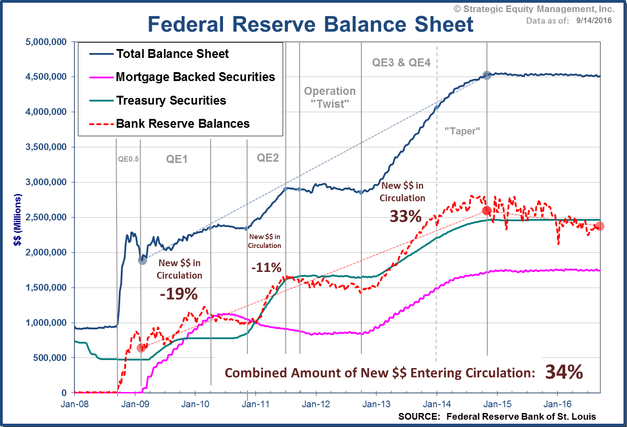 The irony of all of this is another of Professor Bernanke’s theories was regarding communication of the policies. Dr. Bernanke believed if the market participants thought the Fed was going to be actively stimulating the economy for a long time, they would be more likely to take risks.  Instead what we saw the banks do was get MORE conservative with their assets during times of QE.  The only time they started taking money out of their reserve accounts was AFTER QE was either ending or near expiration.  During QE 3, the money did not start circulating in the system until the Fed started “tapering” their asset purchases.  Since it ended in late 2014, we’ve seen the reserve accounts drifting lower.

Stocks moved back and forth on Monday as participants await the outcome of the Fed’s latest policy meeting. Few people expect a rate hike, so the focus will be on the wording of the statement. This is yet another side-effect of one of Ben Bernanke’s experiments he put to work to fight the financial crisis.

Dr. Bernanke believed the Fed’s wording in their statements and a more open communication policy would give market participants more confidence in the Fed’s policies.  Instead it has create a short-term oriented environment where most of the time the only thing that matters is what the Fed might or might not say.

While the economic recovery has been the worst on record, the Fed’s policies have had a big impact on the stock market. 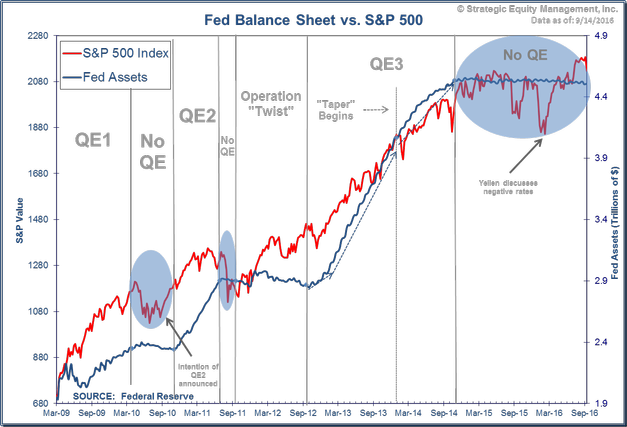 Eventually the market will have to stand on its own at which point fundamentals will matter once again.  When that happens it will not be fun for buy & hold investors.

Here we are again at another highly “important” Fed meeting.  This is one of the 4 meetings that includes the Fed’s “dot plots” or economic and interest rate projections as well as a press conference with the Fed Chair.  As we prepare for this, it’s important to keep in mind 2 things:

1.) In 2007 and even 2008, where with the benefit of hindsight we know we were in the midst of the worst recession since the Great Depression, the Fed, including Vice Chair Janet Yellen had absolutely no idea a.) we were heading towards crisis, b.) how severe the crisis would be, and c.) how to fight the crisis. (click here for some of Fed Chairman Ben Bernanke’s forecasts)

2.) The Fed cannot control LONG-TERM interest rates.  In fact, their policies have had the exact OPPOSITE EFFECT on long-term rates than they thought they would. 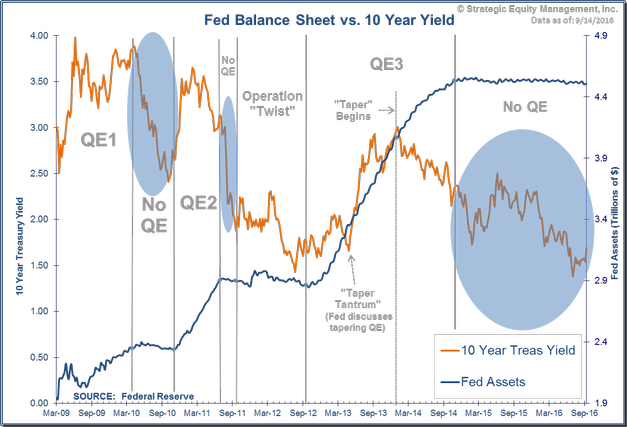 This does not mean we will not see new policies in the years ahead.  This morning the Bank of Japan announced their latest policy decisions.  With their lackluster growth they voted to keep their short-term interest rate target at -0.1%, their 10-year bond yield target at 0.0%, and they INCREASED their ETF purchase program (that’s not a typo — they are creating money to purchase stock index funds). Allow that to sink in a little bit.

The Bank of Japan head was at the Jackson Hole Symposium last month telling all the central bankers about the “success” of their unprecedented policies. Given the pathetic economic growth in Japan, one has to wonder how they define “success”.  Of course in the warped minds of central bankers, success is not the same as it is for us living in the real world.

Yesterday was a fascinating day.  The Fed did exactly what Doubleline’s Jeffrey Gundlach thought they would do — hold steady on rates for now, but make it clear they are still likely to raise rates before the end of the year, yet his “sell everything” advice was not taken.  Instead the market participants seemed to buy everything.  This despite 3 Fed members dissenting on the decision, with all 3 believing rates should be hiked now.

What was more fascinating was the fact the Fed again LOWERED their forecast for the economy for both this year and over the long-run — now down to 1.8%.

In a normal world this should lead to LOWER stock prices as over the long-run the growth in the stock market is tightly correlated to the growth in the economy. Of course we don’t live in a “normal” world anymore (although eventually we will and stocks will be forced to return to “normal” valuation principles.)

The press conference was by far the most fascinating thing I’ve seen.  The reporters in the room seemed frustrated with the Fed’s two-sided speak the last few years.  Some asked if they would ever raise rates and return to “normal” given the number of times they’ve changed the reason they are not raising rates. Others called into question their consistency in being completely wrong with their economic projections. As she did several quarters ago, Chair Yellen emphasized how difficult it is to forecast the economy (again leading me to ask my television screen why in the world the market participants have so much faith in the Fed — won’t they eventually be so wrong we could see yet another Forest Fire?).

This frustration dovetailed into an interesting exchange between a Bloomberg reporter when he asked about the reason behind the low economic growth projections and where any inflation pressures would come from given that.  This “wonky” discussion is something nobody seemed to pay attention to (outside of currency traders and my office), but it should send shivers down the spine of any long-term investor.  Here is the reporter discussing this with my favorite financial media member, Tom Keene (click here for the discussion.)

This is exactly what I discussed in “Broken Model“.  Over the long-run GDP growth comes down to the growth in the Labor Force & the growth in Productivity.  One of the things I discussed in the Broken Model article is what time period we should use when projecting the future.  Based on the Fed’s projections, they are leaning towards the 10-years levels, which is not a positive sign for long-term investors. 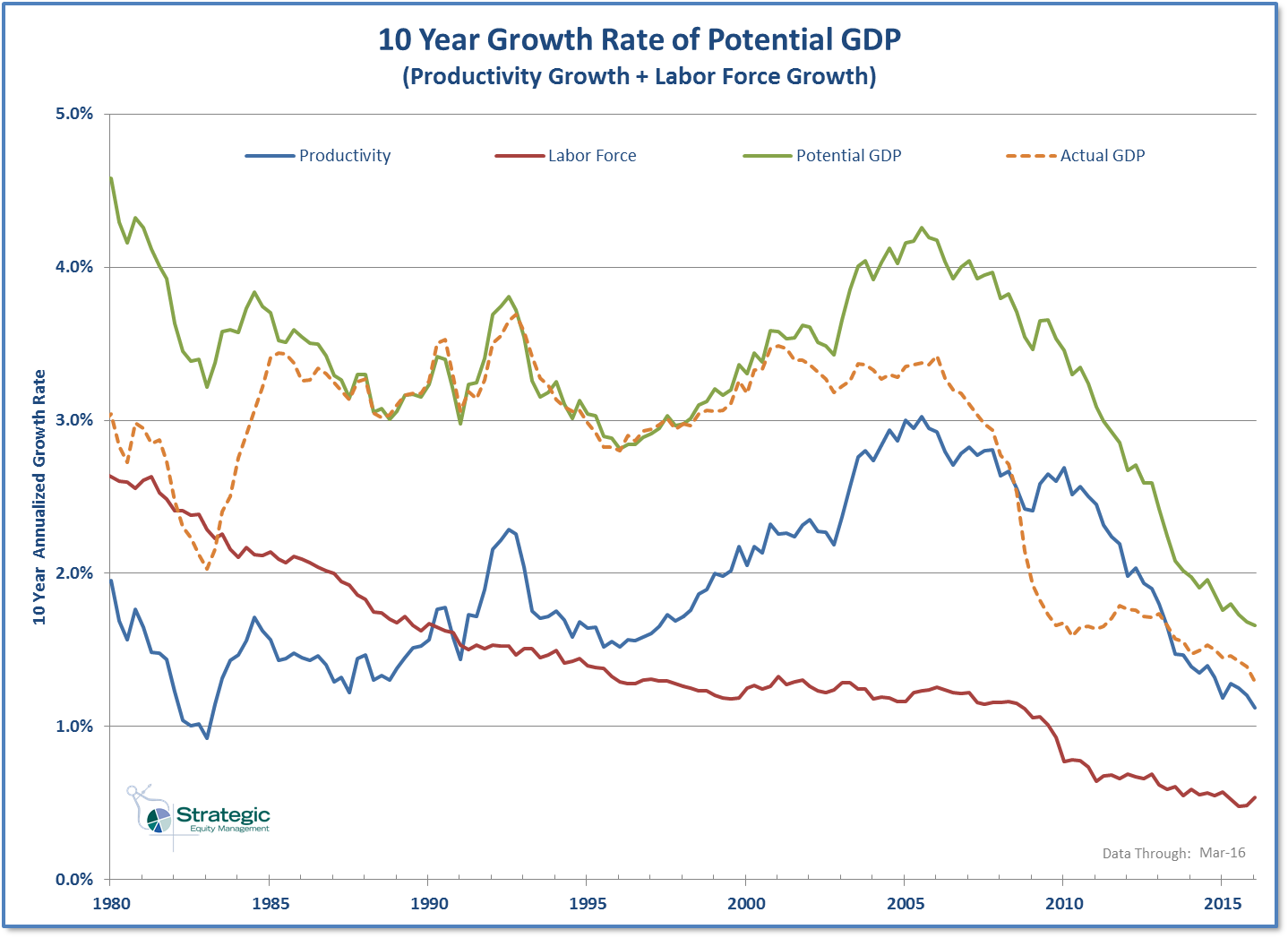 Even worse for those long-term investors based on this discussion — the Fed believes we will have significantly lower than “average” GDP growth, Productivity growth will be weak (hurting profit margins), AND this will create inflationary pressures, causing the Fed to be forced to raise interest rates.  Of course those our long-term problems that nobody seems to be concerned about at this time.  As we move into the future those “long-term” issues become closer and closer to “short-term” ones.

Given the complete confusion by the Federal Reserve over what drives the economy and how they can fix the issues, I’m glad all of my assets are managed by SEM’s actively managed investment programs.

After watching the market action the past few weeks I am hopeful the sharp rally the past few days following the Fed meeting was over a sense of relief the Fed did not shock the market as Doublelines’ Jeffrey Gundlach thought they would. Fundamentally, the forecasts from the Fed were quite bearish for long-term investors.

There is a simple way to calculate expected returns for the market:

Over the long-run, earnings cannot grow faster than the underlying economy, so we plug the Real GDP Growth Rate into the formula.  This yields the following forecast for long-term market growth:

This is a far cry from the long-term average of 8-10% for stocks and is well below what most pension funds have modeled for stock market returns.  This also assumes profits as a percentage of GDP (already at an all-time high) will remain at the same percentage. Given Fed Chair Yellen’s comments on Productivity growth issues going forward, this is a big assumption to make. This model also doesn’t factor in any “price” adjustments, so it assumes the current P/E rate is “fair value”.  Given valuation levels are at levels we’ve only seen in past market bubbles that too is a big assumption to make.

I get it — stocks have been doing great and appear to be the only game in town, but math, logic, and economic principals tell us this cannot continue forever.  Whether it is our Income programs (Tactical Bond, Income Allocator, or Tax Advantaged Bond), which are well positioned to take advantage of SHORT-TERM disconnects in the bond market or our Dynamic Programs (especially our unique Dynamic Asset Allocator) that add alpha by over or underweighting key sectors based on the economic cycle we are well positioned to handle this low growth environment that is looming on the horizon.

Be sure to check our our Current Allocations page to see how our trading systems and programs are adapting to the market.

About Jeff Hybiak, CFA
New Kent, VA
Jeff joined SEM in October 1998. Outside of SEM, Jeff is part of the worship team at LifePointe Community Church where he plays the keyboard and bass guitar. He also leads a small group Bible study.
Previous Post : The Productivity Conundrum   Next Post : Still the most attractive bond