A couple weeks ago when the market “crashed”, falling 10%+ in less than 8 days I introduced an analogy to describe what happened:

Too many people were speeding

The analogy I often use is this. If you’re on a road trip, you may decide to push the speed limit. You push it up to 5 mph over the limit. You don’t see any cops or any accidents. People keep passing you so you go up to 10 mph over the limit. Again you see no cops or accidents and again people are still passing you. You then tend to reason with yourself, “everybody else is speeding,” or “I’m just keeping up with traffic.” The problem is you KNOW you shouldn’t be speeding. You KNOW it’s unsafe, but you’re brain has rationalized you violating these KNOWN rules.

The past two trading days we saw the equivalent of a “car in the median” that may or may not been a cop. All the people that increased their speed 10, 15, 20 mph the last few miles immediately panicked.

The “car in the median” was inflation. Specifically what spooked market participants was a 2.9% annual increase in average hourly earnings. The fear is all the money created by the Federal Reserve the last 10 years along with Congress finally joining the stimulus game with the tax cut bill (something that is EXTREMELY dangerous this late in the economic cycle) we would see runaway inflation. At best, this means all the growth is eroded by inflation. At worst, rapid inflation will cause the Fed to (over)react and raise rates too quickly, sending the economy back into recession (as they have done prior to every US recession).

Looking at the actual data, the “car in the median” was not a cop, but simply somebody turning around. The green line is wage inflation, the blue the Consumer Price Index, and the red the Personal Consumption Expenditures Price Index. The latter is the measure the Fed prefers to use as its inflation gauge. 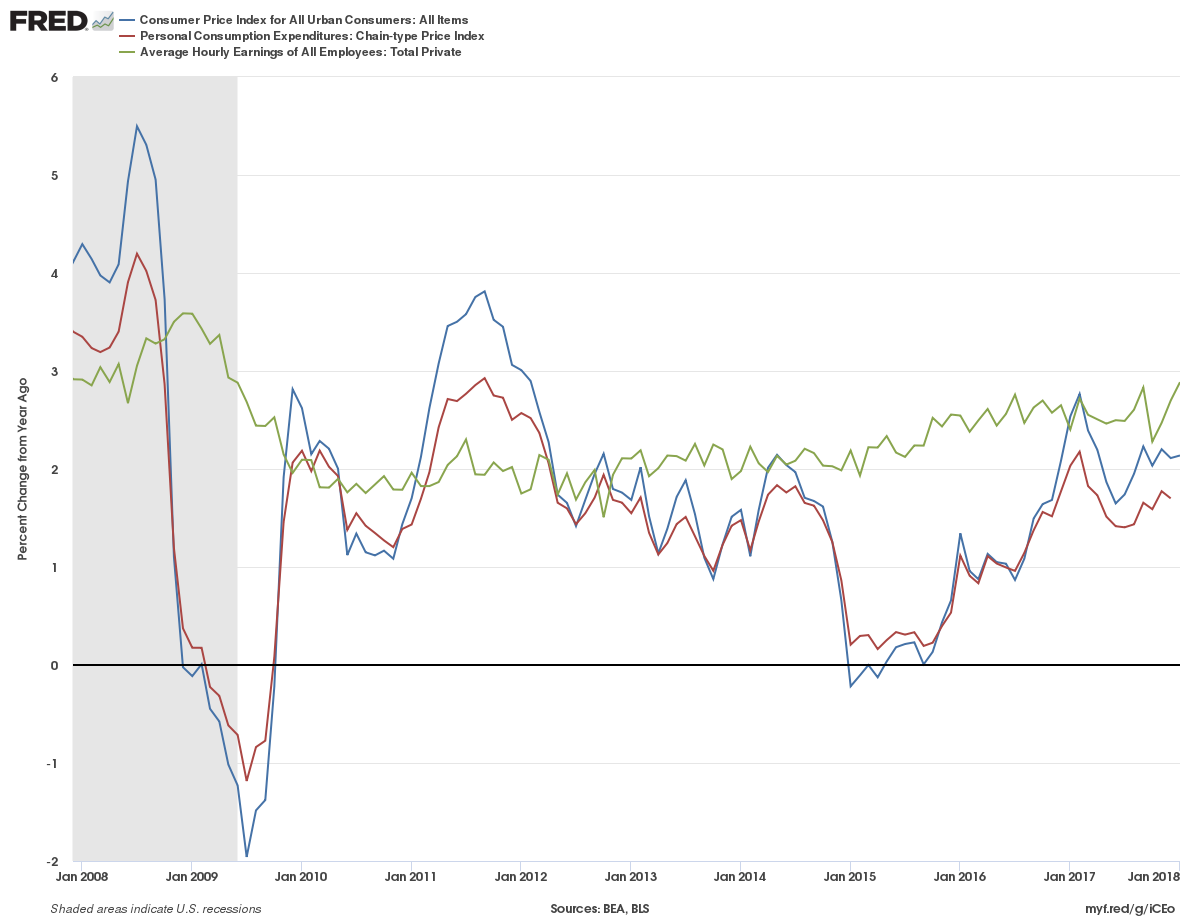 That said, it does not mean we should not be concerned. The trend is certainly higher and the tax cut bill risks causing too much growth at a time where we are nearly at “maximum” employment. This almost always sparks a sharp rise in inflation. Despite what happens with inflation and how the Fed reacts, the bigger concern should be how over-extended this bull market has become. The rapid snap-back has drawn money back into the market and has emboldened participants into believing even if the market does go down it will be short-lived.

Whether an advisor or an individual investor, if you found yourself wanting to “hit the brakes” in early February you probably were going to fast. At SEM we have a wide-range of portfolios we can customize to match the speed limit you should be going. If you’d like to learn more, drop me a line.

About Jeff Hybiak, CFA
New Kent, VA
Jeff joined SEM in October 1998. Outside of SEM, Jeff is part of the worship team at LifePointe Christian Church where he plays the keyboard and bass guitar. He also coaches a club soccer team.
Previous Post : Things we need vs Things we want   Next Post : Depends on how you look at it