The Federal Reserve has come under intense scrutiny, not only from our President, but also from the stock market bulls who are blaming them for the 2018 sell-off. Specifically they are going after Fed Chairman Jay Powell saying he “doesn’t understand how the markets work” or “doesn’t realize the damage increasing rates is doing to the stock market.” Long time readers know I’ve been a frequent critique of the Fed and their policies, but I do not think Chairman Powell deserves the criticism being thrown at him

Unlike all the other Fed Chairs, Chairman Powell is not a career academic or bureaucrat . He has an impressive real world resume that a Fed Chair should have. Mr. Powell has not only served as Undersecretary of the Treasury, but worked in investment banking for several decades. He knows what drives economic growth, business creation, how the credit markets work, and what impact interest rates will have on all of those. (Compare this to President Trump who has seen 6 of his companies file for bankruptcy.)

Chairman Powell has a nearly impossible job. Since 1998 when Allen Greenspan decided to bailout the Wall Street banks on the verge of collapsing due to their excessive exposure to Long Term Capital there has been a Fed “put” on the market. (A put option is something you can buy to lock in a price on your investment.) If the markets went down too much, the Fed would come in with more stimulus. The banks knew if they got into too much trouble, Greenspan, Bernanke, or Yellen would be there to bail them out. This led to excessive risk taking that Chairman Powell knows can lead to too many unforeseen problems when a crisis strikes.

I’ve talked about this many times over the years, starting with our most popular article, “The Pending Forest Fire“, which predicted the eruption of an uncontainable fire in April 2007. Chairman Powell knows the Fed needs more resources to fight the next fire, but getting those resources ready could spark some smaller fires. With more debt now than before the 2008 Financial Crisis, there is plenty of kindling that could erupt.

The biggest issue is Chairman Bernanke and then Chair Yellen were running academic experiments on the economy. Their policies had never been used before and were ideas created in a sterile classroom environment. I discussed some of the problems in my 2011 article, “The Grand Experiment” . In 2016 when the central bank leaders form around the world discussed the use of negative interest rate policy (NIRP), I wrote an article titled, “More Harm than Good.”

We are in this situation because of the past Fed leaders and it has nothing to do with Chairman Powell. Remember, the unprecedented policies used to fight the Financial Crisis have never had to be unwound in the real world. Even the academics did not really have an answer for the best way to do this. In late 2015 Janet Yellen finally decided to start raising interest rates. This was far too late in the game and her delay led to even more excessive risk taking.

The real problem was the Fed’s Balance Sheet. The Fed had purchased $3.5 Trillion of bonds from the Wall Street banks from late 2008 through the end of 2014. The goal was to increase the money supply and encourage banks to lend money for long-term capital projects. Instead, due to changes in the laws back in 1998, banks chose to invest money in the markets using the excessive cash provided by the Fed to leverage these investments.

This week’s Chart of the Week takes a look at the Fed Balance sheet. The important lines to focus on are the blue and purple lines. The blue shows the overall size of their balance sheet. The purple are the reserve balances held by the Wall Street banks at the Federal Reserve. My criticism of the various Quantitative Easing (QE) programs was the lack of money actually flowing into the economy. Notice how on the way up, the purple line actually increased at a faster rate than the Fed’s Balance Sheet. By the end of QE the Fed was reportedly 85 to 95% of the bidders at Treasury auctions. 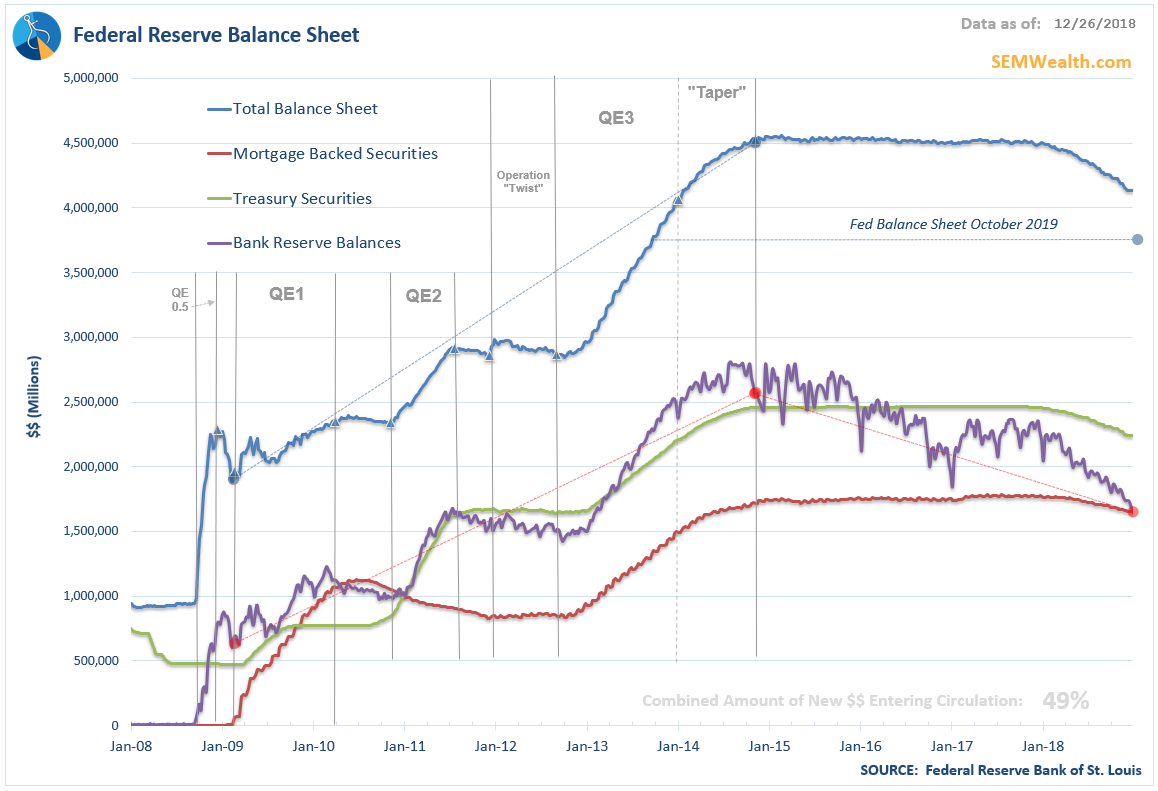 With the Fed now gradually unwinding their purchases, the markets are faced with a few issues:

Maybe Chairman Powell will relent and back away from interest rate hikes. The Fed Funds futures (used to estimate the level of interest rates in the future) have swung from predicting four rate hikes in 2019 a month ago, to three 2019 hikes two weeks ago, to an interest rate cut in March this week. Read the list above again. The issue is not short-term interest rate increases. The issue is the Fed has an impossible task of unwinding their balance sheet and letting the free markets function at a time where we have significantly more debt than before they started their QE program.

Regardless of what happens in the short-term another Forest Fire is looming. The Fed Chairman knows we MUST get out of the “Fed put” mentality if we want true capital creation in the future and markets that function normally.

Please do not let any rally lull you into a false sense of security. The chances of another uncontrollable “fire” is quite high.

The 3% rally on Friday was impressive and has emboldened investors once again. I would caution anyone believing the coast is clear to realize an old adage – “the strongest rallies nearly always occur inside a bear market.” I’m not sure of the reason, but our trading system testing over the years has told us how difficult it is to “short” the stock market. The reason being you get these unexplained “counter-trend” reversals inside a bear market without warning.

The post-Christmas rally appears to have been led by massive pension fund purchases. Before you get excited, remember, most pension funds rebalance quarterly or annually back to their “strategic” asset allocations. When you have such large losses in a given quarter it leads to large purchases. Some funds re-balance just ahead of year-end, others re-balance right after year-end.

The catalyst behind Friday’s rally was a general feeling that Fed Chairman Jay Powell is willing to back down on the tightening he has previously said was on “auto-pilot.” I found it ironic that he was sitting with the two creators of the current debt bubble when he said all of this. Time will tell if he was just testing how dependent the stock market is on the Federal Reserve. Fed insiders have said he’s lamented the market’s dependence on the “Fed put” discussed above. Friday’s rally does not help mitigate his concerns.

Our systems and my experience tells me there is further pain ahead. Emotions are high, which is why I am glad we have our well-tested systems to navigate what could be a difficult year ahead.