As we edge closer to the longest economic expansion on record, I think most people are expecting some sort of slow down in growth. It’s not the Fed’s fault as one popular Twitter user likes to point out, but rather an economic fact that simply cannot be avoided. The stimulus from the tax cuts in early 2018 have run their course.

We are finding the boost we normally see from tax refunds is not going to be as big this year because the withholding tables were adjusted. Americans received the benefit of the tax cuts throughout the year and spent accordingly. Corporations paid one-time dividends, bought back stock, paid bonuses, and increased wages slightly. What they didn’t do was cause a big jump in capital expenditures as some had suggested. It turns out even with lower taxes, businesses won’t invest in large projects if they aren’t optimistic about the long-term future.

This is not a political statement (I’m not a Republican or a Democrat, I’m an American) nor is it me saying tax cuts are bad. All things equal, giving citizens and corporations more money is a good thing. The problem is the timing — providing stimulus this late in the economic cycle has never worked. Worse, all the tax cuts did besides push the budget deficit to levels last seen as the Obama administration was trying to fight the great recession was pull some spending forward. 2018 economic growth was AVERAGE.  It couldn’t even surpass the growth we saw in 2015. 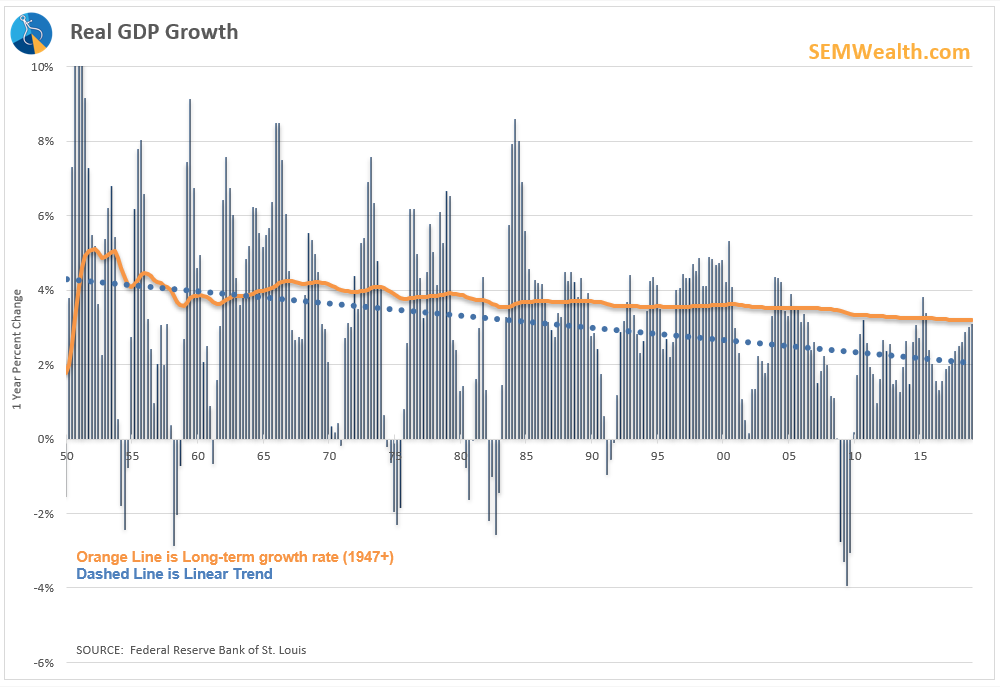 Now we are seeing with the impact of tax cuts waning, the SEM economic model is picking up on a marked slowdown in the growth rate. The steady rise off the trough in early 2016 (before the election) seems to be over. 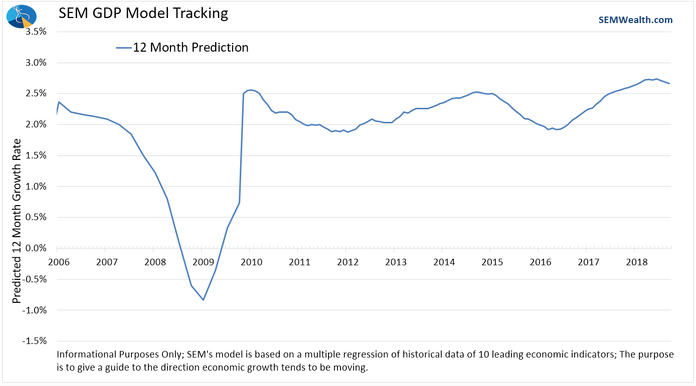 This isn’t necessarily the start of a recession, but it is something the stock market doesn’t seem to have priced in. What it means for our dynamic models though is a much more defensive positions. Dynamic Aggressive Growth has jettisoned its small cap exposure and even has a 30% position in bonds. Dynamic Income Allocation has dumped our dividend growth stock holdings and added some positions in Treasury Bonds. The last time we went “bearish” on economic growth was back in mid-2015. It wasn’t necessarily a bad time for the stock market, but it was a difficult time.

The key culprit towards the neutral rating the last 5 months and now the bearish signal has been manufacturing. This sector saw strong growth as everyone ramped up their inventory ahead of the expected tariffs everyone was afraid of. Now they are having to burn off that inventory. If there is a solid trade deal with China we could see some positive impacts, but we’ll leave it up to the DATA to make that decision.

I think what has me truly excited is the diversity of our investment management models. The tactical models remain fully bullish and are primed to participate should the market continue its rally. These models are also the ones who can get defensive the fastest should it become necessary (as we saw last October). Now our Dynamic Models are “bearish”, but still have exposure to the markets per their design. They essentially have taken some profits off the table waiting for a time where the economic growth rate is increasing. Our AmeriGuard models are also somewhat defensive, but still have enough exposure to be making money during this rally.

All three management styles use completely different methods to determine asset allocation, giving our advisors and their clients the benefit of essentially having three different “managers” taking care of their investment allocations.

As always, we will keep you posted on the blog anytime there are significant changes to our allocations.

About Jeff Hybiak, CFA
New Kent, VA
Jeff joined SEM in October 1998. Outside of SEM, Jeff is part of the worship team at LifePointe Christian Church where he plays the keyboard and bass guitar. He also coaches a club soccer team.
Previous Post : Why Slowing Growth Matters   Next Post : A Business Major’s take on SEM’s recent blogs